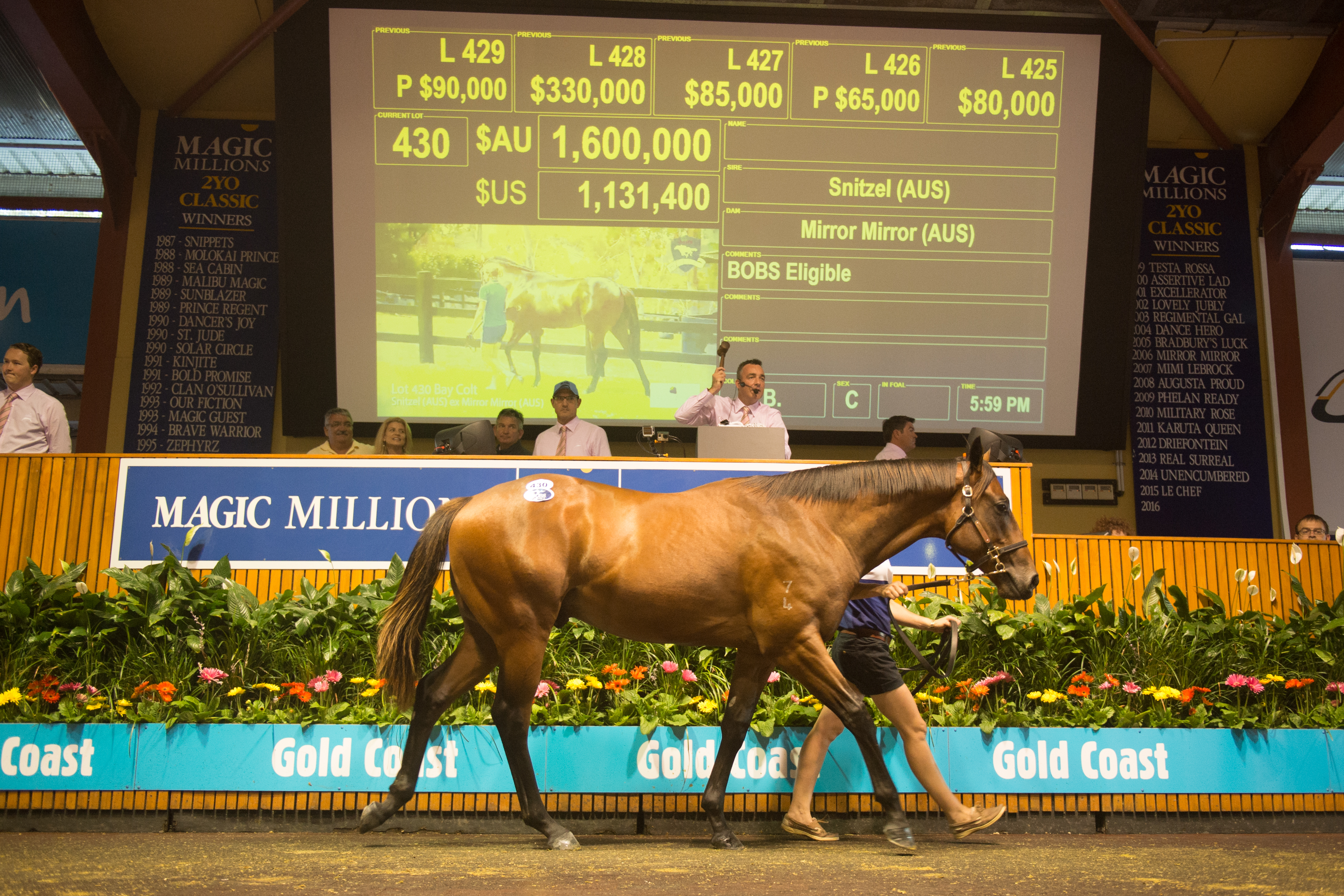 There’s always something special about the Gold Coast Magic Millions Yearling Sale. The Christmas present you left under the tree. Until now.

The unwrapping takes place on Wednesday when the first of 1,086 lots – spread over six sessions – goes under the hammer: ‘interrupted’ by a $10 million race program on Saturday.

What’s not to like? Sure, it’s the job of Magic Millions’ Managing Director, Vin Cox, to be enthusiastic about his company’s flagship, but even he is anticipating an increased level of excitement on the Gold Coast for 2017.

“There are so many positives about this sale and the industry at large,” Cox points out. “Events on the track in the past 12 months have been so captivating … everyone wants to race a horse like Winx and she’s just such a great advertisement for ownership. And how about Global Glamour? What a great story she is! Owned by women in 17 different countries – it’s just amazing how far and wide that filly is getting acclaim.

“I’m very happy with the catalogue for this year’s sale: there are 70 more horses in book one and there really is a broad cross section of horses on offer: both yearlings at the high end and those in the sub $50,000 as well. Everyone is in with a chance.

“We’ve been really taken by the quality of horses too, both during the course of inspections and now when you see them parading around the complex.

“I’m not about to isolate individual lots, but one of the best gauges is the early feedback from potential buyers and in that regard too, we’ve worked hard to attract both the domestic and international benches.

“There are already a lot of faces we know and love out there and, by the time the sale gets underway, I’m sure there will be a flew pleasant surprises as well!”

While all the crack sires have gathered to the fray, Cox was also pleased with the progeny of first season stallions: “Again I’m loathe to focus on any particular sire, but there’s a lot of positive talk about the Zoustars, the Dundeels … Sizzling was a very good looking yearling himself when he was sold up here (in 2011) and he appears to be throwing them very much to type, while the first of the Unencumbereds are on the Gold Coast and many people still remember his impressive win in the 2014 Magic Millions 2YO Classic.

“Everything is pointing to a memorable week: the catalogue is very solid – both on paper and what you see in front of you – and as for the $10 million raceday … incredible. That is one of the strongest 2YO fields I’ve seen, while the 3YO Guineas could be one for the ages: Winning Rupert is just such an exciting horse and the second favourite (Global Glamour) is a dual Group One winner!

“This sale is becoming easier to promote each year: Winx, Global Glamour and the last two Golden Slipper winners in Vancouver and Capitalist, to name just four of its graduates.

“It’s not difficult to convince people – vendors and buyers – to come here when you have that kind of form on the board.”

Thoroughbred Breeders Australia President and Raheen Stud principal, Basil Nolan, is adamant that the Magic Millions’ strength is its diversity with “something for everyone”.

“There’s over 1000 horses to go through the ring and while I’m confident the top end will again be strong, there’s plenty of value to be had at the lower end of the market too.

“This sale has proven to be a happy hunting ground for buyers over the years and you only have to look at the race on Saturday to see that there’s quality to be had regardless of budget.”

Luskin Park Stud’s Paul Whelan was cautious as to what the next week will bring in terms of prices, but points out: “there’s a very good feeling about this sale”.

“I believe that enthusiasm for racehorse ownership is growing – especially with horses like Winx out there – and it’s becoming a lot less expensive. People get a lot of enjoyment out of racing and hopefully there’ll be quite a few more new owners by the time this sale is done.”

“All positive so far,” was the message from Sun Stud’s Sales Manager, Phil Marshall, two days out from the first lot. “Parades on Friday and Saturday were solid while Sunday really picked up … I’m expecting it will get really busy from here on in. It’s a typical Magic Millions in many ways – I’ve seen some good quality horses around the complex and, importantly, all the right faces are here!”

Blue Sky Bloodstock’s Julian Blaxland has a two pronged attack going into Saturday’s $2 million Magic Millions 2YO Classic with his 2016 purchases, Invincible Star and From Within, both highly favoured runners.

But before he puts on the good clobber and walks across the road to the Gold Coast Turf Club, he has plenty of work left to do at the Magic Millions complex.

“There are a lot of nice horses up here and some incredible pedigrees. Competition is going to be tough as well given there are already a lot of buyers on the Coast. The hard bit for me will be whittling down the yearlings I like to a workable number … my short list is too long!”

James Harron found one of the Magic Millions’ greatest success stories when purchasing Capitalist in 2015 and he’ll be doing his best to find Mark II from Wednesday: “As always, there are plenty of nice horses around which is a credit both to Magic Millions and breeders. Last year’s sale was outstanding for all concerned and hugely indicative of the attraction of the Australian product both domestically and globally. Given that Australian prizemoney has increased again since then, I see no reason why this shouldn’t be another strong sale.”