Confidence High Ahead Of Premier Sale 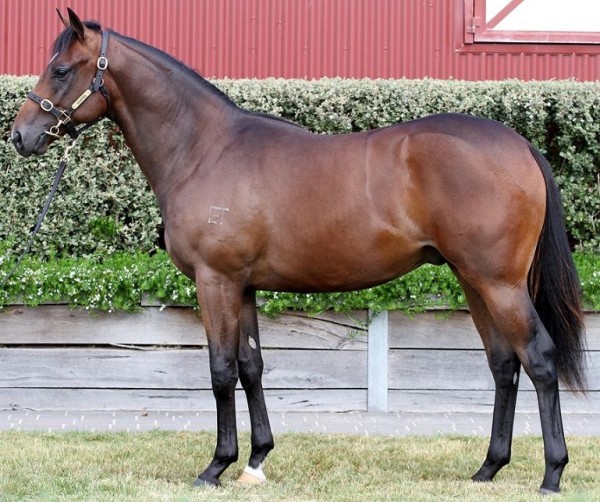 There is growing belief that a new record will be set at the Inglis Melbourne Premier Yearling Sale this week and once again it is a colt by Snitzel that is creating the hype.

Lot 205 (pictured above) offered by Glentree Thorougbreds is the main attraction and Inglis’ James Price suggests he could eclipse the $750,000 record set back in 2008.

“This colt could have been a top show at Easter, we are extremely grateful that he is being offered in Melbourne,” Price said.

“If this sale is going to produce a seven figure colt, I think this might be the one.

“He is a real star, he has got a great Snitzel head, wonderfully balanced and is from the family of Redoute’s Choice out of an Encosta De Lago mare.”

The Snitzel colt is the first foal from Miss Iguaca, an unraced Encosta De Lago mare, who is a sister to multiple stakes winner Niagara.

She is a daughter of River Song, who is out of Twyla, a three-quarter sister to Redoute’s Choice, Al Maher, Platinum Scissors and a half-sister to Hurricane Sky and Umatilla.

So why isn’t this star colt being offered at the Inglis Australian Easter Yearling Sale in Sydney?

“The Melbourne Premier is a progressive sale and Glentree Thoroughbreds are keen to support the wonderful job Inglis are doing in Victoria,” said Glentree’s Luke Simpson.

“We could have taken this colt (Lot 205) to any sale and he would have been extremely popular but we have put all our eggs in one basket.

“We have a quality draft of seven yearlings on offer and believe we will get good results by selling at Oaklands Junction.

“The Snitzel is the best of our draft, he is a spitting image of his sire.

“He is a strong coupled horse who looks like he will be very precocious.

“He’s got the stallions pedigree and we are looking forward to what he can achieve.”

Simpson has been involved with Glentree Thoroughbreds for the past three years, managing the 600 acre property that is privately operated.

They have 20 highly commercial mares at their Modewarre base and have the best quality draft according to Inglis’ Simon Vivian.

“I think it is the best draft in the sale and there is genuine belief the sale-topper will be among them,” he said.

Last year session one of the sale saw 469 lots sell for an average just shy of $96,000, with the highest yearling, a filly by Snitzel, selling for $560,000. Given the increases at Magic Millions January sale, plus the gains at the Inglis Classic and Magic Millions Perth and Tasmania, there is hope the market will again be strong.

“I think most breeders are excited about the sale, especially as the other auctions that have started before us have done so with a bang,” said James O’Brien, president of Thoroughbred Breeders Victoria.

“This year’s horses sired by Victorian stallions will also be eligible for a $300,000 race as two and three year-olds and that can only help the market. This sale has grown year on year since the global financial crisis and we’re very hopeful that trend will continue.”

Sangster has taken the approach to sell heavily at Oaklands Junction this season before expanding his horizons in the coming years.

“We wanted to concentrate the new morphed Swettenham on Melbourne and sell in the one place, not to dilute the product,” Sangster said.

“In years to come we will be back at Easter but I think it was best to sell in our own backyard and showcase close to home.”

Sangster is excited to see how Americain will be received, given the Melbourne Premier Sale being the first opportunity buyers have had to get their hands on the Australian bred stayers.

“We’ve seen in the past couple of years that many buyers have been going overseas to get their stayers with the way the dollar was,” he said.

“But that has come back 25 to 30 per cent and there is a great opportunity to breed our own with a horse that is very popular given he won the Melbourne Cup.”