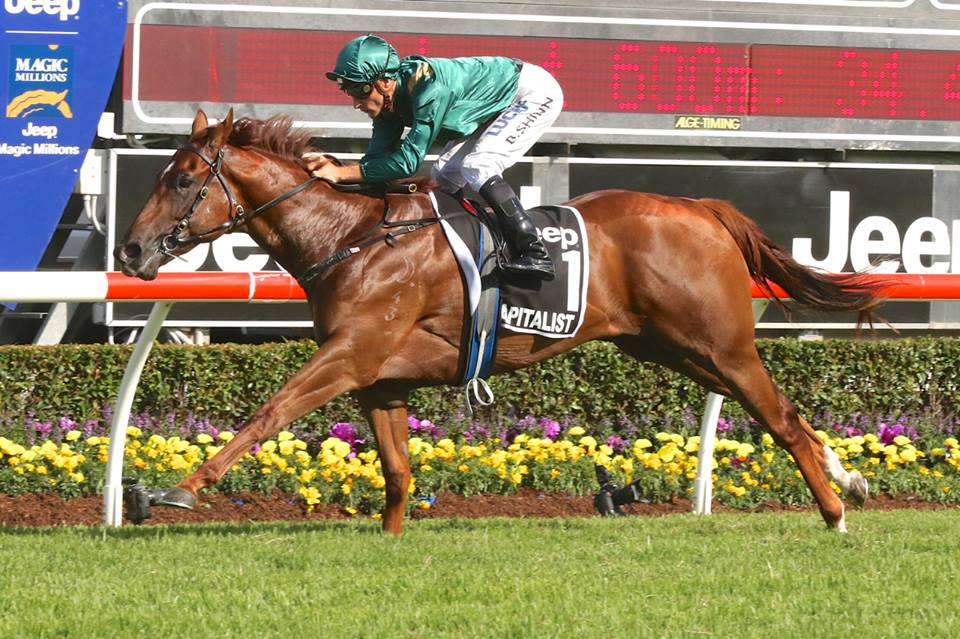 Purchased as a yearling for $165,000, unbeaten after three starts including Saturday’s Magic Millions 2YO Classic, with earnings of over $1.49m, the James Harron Bloodstock secured Capitalist appears one of the most promising two-year-olds of recent times.

Currently the favourite for the $3.5 million Group 1 Golden Slipper, the son of Written Tycoon will be looking to emulate Phelan Ready and Dance Hero by winning the lucrative juvenile double.

Utterly dominant in all three starts, winning on average by over two and a half lengths each time, Capitalist once again toyed with his rivals to take home the lion’s share of the prizemoney in the $2 million Magic Millions 2YO Classic.

“He is an exciting horse and let’s hope he’s a horse to look forward to in the future,” stated co-trainer Peter Snowden post-race.

“It (The Golden Slipper) is doable and I was very mindful of it because this is only his second run back from a spell.

“There is room to move because he was ready for today but I think there is more to come.”

Bred and sold by Queensland’s Daandine Stud, the very stud that also bred and sold Capitalist’s sire Written Tycoon, the farm was fortunate enough to offer a Real Saga half-sister (Lot 357) to Capitalist on day two of the sale.

Purchased once again by James Harron Bloodstock, this time for $200,000, the filly is the penultimate foal of the Fusaichi Pegasus mare who died in October this year, leaving behind a Smart Missile filly foal.

From a pedigree that contains the Group 1 Golden Slipper winner Merlene, dual Group 1 winning sprinter Miss Pennymoney, as well as the Group 1 VRC Oaks winner Dear Demi, the residual value on the Real Saga filly is quite high, even if she never makes it to the track.

Sunday morning revealed that Capitalist had pulled up in great shape after his win, with co-trainer Paul Snowden indicating that the colt still had improvement in him.

‘’He’s a tough little bugger and he’s pulled up in great order this morning,’’ Snowden said.

‘’He was good, very good but he was a bit fresh in himself midrace, a little above himself and so there’s that improvement to come and he’s going to need that if he’s going to win a Golden Slipper.’’

Currently the favourite for early markets in for Golden Slipper on March 19, Capitalist will be given about 10 days off before he embarks on a campaign aimed at the world’s richest juvenile race.

“We’ll get him back in and I’d imagine we’d give him one run going into the Slipper,” Snowden said. “’You just don’t want to be second-guessing in a race like the Slipper so I’d say he’d have a run to get him to the race cherry-ripe.”

Among the ownership of the colt is Newgate Farm, with Managing Director Henry Field in the bussiness of making stallions, and Capitalist could just be that next big thing.

“While Written Tycoon isn’t a top five sire, he is a stallion we admired, and Capitalist fitted our ideas of a quality colt.”

“We had to think about it differently to get a stallion because once they do it on the track, we can’t compete with the big studs.”

“This was the dream, and we still have the Golden Slipper to go. Capitalist was the horse we were looking for when this started.”

Success in the Slipper would see Capitalist an instant stallion prospect and make the initial investment of $165,000 by Harron appear somewhat insignificant.