A Golden Time In Queensland 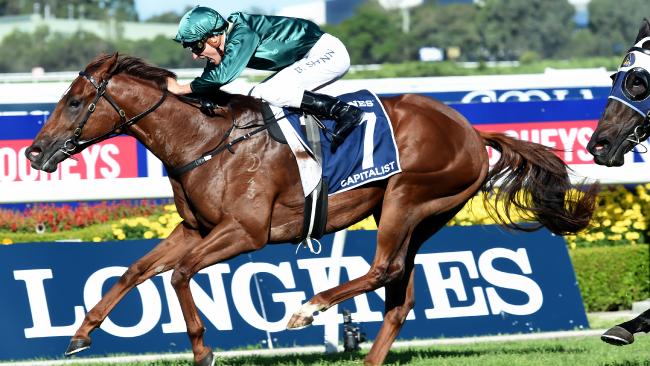 Daandine Stud manager, Mark McCann, posed an interesting question. Just how many farms have produced the winner of the Golden Slipper AND the sire of the winner to boot?

Yes, the ‘double’ had been achieved prior to Capitalist and his sire, Written Tycoon, on Saturday, but as McCann proudly states, never before off a private farm with just 15 mares!

Jan Clark, the owner of Daandine Stud near Warwick in Queensland, is a fourth generation breeder and was understandably over the moon at the success of her homebred – homebreds! – in the world’s richest 2YO race.

“My great grandfather started Daandine back in 1922 and we have A Grade mares, B Grade mares and Hope-To-Be mares,” Clark reveals.

Currently attending to Daandine’s draft at the Gold Coast March Yearling Sale which commenced today, it was at this very complex in January of last year where James Harron looked at a member of Clark’s select draft for the 2015 Gold Coast Magic Millions.

The Written Tycoon colt from Kitalpha was, according to Harron a “beautiful specimen – mature for his age and looking very precocious”.

Harron eventually paid $165,000 for the colt. The young agent has regularly run into seven figures for yearlings that take his fancy, but only three Written Tycoon yearlings had previously exceeded that amount.

It would be money very well spent.

So too, it would appear, is the $200,000 Harron paid for the Real Saga half sister that he snapped up from Daandine this year, just two days prior to Capitalist blasting away his rivals in the $2 million Magic Millions 2YO Classic.

Following the Gold Coast victory, Capitalist was immediately installed favourite for the $3.5 million Longines Golden Slipper, but an inexplicable second in the Todman two weeks ago saw him drop from Slipper calculations in the minds of many.

Not so Harron. Nor the colt’s band of owners. Nor his trainers, Peter and Paul Snowden. Nor his jockey Blake Shinn. Nor, it must be added, his now very happy Queensland breeder.

Capitalist’s race earnings are now hovering at the $3.5 million mark with the promise of much more in waiting – not to mention a tidy sum for stallion duties once his track career is completed.

Although Written Tycoon, as a racehorse, never attained the heights of his illustrious son, he did ironically win the Todman in a career which spanned just 11 starts before he retired to Eliza Park in Victoria where he spent five years at a modest fee before shifting to Eliza’s Queensland division for the 2012 breeding.

By that time, Written Tycoon had taken out Australia’s First Season Sires’ premiership and Clark couldn’t resist the urge to send her mare Kitalpha an hour or so down the road for a visit. It had been nearly 10 years since Daandine had sold Written Tycoon as a yearling for $50,000 at the 2004 Gold Coast Magic Millions to Sydney trainer Grahame Begg.

Written Tycoon only spent the solitary season at stud in Queensland and was subsequently re-located to Woodside Park in Victoria, where he goes from strength to strength and is well on target to capture a second national sires’ title.

But one season was definitely enough for Daandine Stud.

Unfortunately, Capitalist’s dam, Kitalpha, died just a few days after producing her fourth foal, a filly, last September which, according to Clark, will be retained for racing and ultimately breeding.

While the loss of Kitalpha would be a blow to any farm, especially as she is, in turn a daughter of Group winner and stakes producer, Compulsion, and granddaughter of Bold Promise, a Magic Millions 2YO Classic winner and dam of Golden Slipper winner, Merlene, Daandine has Kitalpha’s half sister Quality Impulse who produced a “lovely I Am Invincible colt last spring”.

Daandine also owns Merlene and will sell a So You Think colt out of the mare at the Australian Easter Yearling Sale in April.

It appears that James Harron might not be the only visitor to Daandine’s draft of one in Stable 4 at Newmarket when inspections commence later this month.