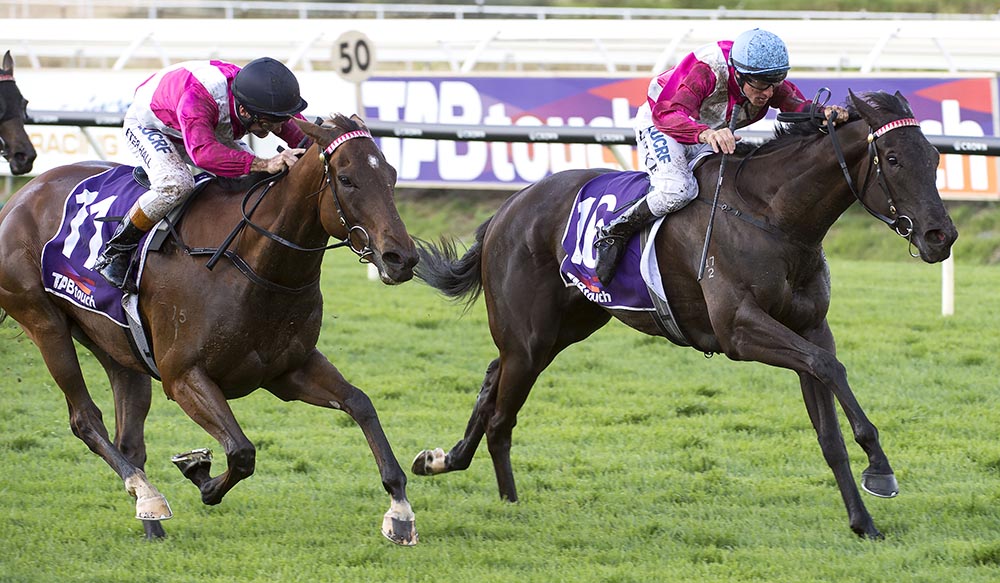 “She shouldn’t have been in a Group 1,” stated owner/breeder Bob Peters moments after Perfect Reflection created history by winning Saturday’s Group 1 Kingston Town Classic at Ascot.

Set for the race after a mishap a few weeks prior, resulting in a change of race plans, ended with the More Than Ready filly going five for five by defeating stablemate Delicacy in the final Group 1 of 2015.

Making her racetrack debut back in September, the Grant Williams-trained filly won at Pinjarra and Belmont Park before progressing to the Listed Belgravia Stakes (1200m) at Ascot where she recorded an easy length and a quarter win.

In both of those stakes wins, Perfect Reflection defeated stablemate Arcadia Dream (Domesday) and Fred Kersley’s Blackwood (Blackfriars), with both of those fillies also now stakes winners, further highlighting the class of the prior victories.

As Real Love went forward to take up a handy position, the other three settled towards the tail of the field, and as they reached the home turn, jockey William Pike on Perfect Reflection was simply travelling too well as the filly pulled herself to the lead.

Ridding her like the best horse in the race, Pike let her go, and she charged two lengths clear, only to have stablemate and multiple Group 1 winner Delicacy surge from the pack to chase hard, going down in a photo finish on the line.

Having no hesitation in selecting the talented filly weeks ago as his ride for the race, Pike’s faith in the filly was justified by the history making win – becoming the first three-year-old filly to claim the race.

“I presented her too early but she was going just so well and I had the light weight and rolled with the flow,” Pike said.

“She waited a bit in front and it was only when Delicacy came into my eye line that she started to fight and we nearly got caught.”

One of nine stakes race wins recorded by Peters Investments so far this season, with only Darley having bred more, the victory capped off a great day for Perfect Reflection’s dam Reflected Image (Bluebird) who had earlier in the day produced Ideal Image (More Than Ready) to win the Listed Jungle Dawn Classic.

Reflected Image is the dam of four stakes winners with Elusive Image (Elusive Quality) and New Image (More Than Ready) having been the first two for the mare.

A winner of the Group 2 WA Oaks after being purchased from the Inglis Easter Yearling Sale for Peters Investments, Reflected Image has had eight foals to race, all winners, highlighted by four stakes winners and now has that elusive Group 1 next to her name as a broodmare.

True Reflection (Hard Spun) is the current two-year-old out of the mare who also has a yearling colt by Hard Spun, while she foaled a filly this season by Swettenham Stud’s Group 1 Melbourne Cup winner Americain before heading back to the same stallion again.

Jarrod Byers of Millford Thoroughbreds, where eight to 10 of Peters’ mares are based at any one time, described the Americain filly as a “lovely and athletic filly with plenty of quality.”

With three of Reflected Image’s stakes winners being by Vinery Stud’s More Than Ready, the win of Perfect Reflection to become the 17th Group 1 winner for the Champion sire had all at Vinery extremely excited.

“We sometimes take it for granted what More Than Ready has done for the Australian industry. In his own right he has been the leading stallion in the Australasian industry, achieving many feats such as; winning the Magic Millions and Golden Slipper in the same year (twice) and being the only stallion to be crowned a champion two-year-old sire in both the U.S. and Australia,” stated Vinery Stud’s General Manage Peter Orton.

“He has sired Blue Diamond and multiple Breeders Cup Juvenile winners, but he is more than a two-year-old stallion, producing several Derby and Oaks winners throughout Australasia. Most importantly he has offered the unique outcross for the plethora of Danzig blood we have here in Australia.”

With his ability to get all types of runners on the track, his progeny are always in demand in the sale ring, and the 18 catalogued for the upcoming Magic Millions Yearling Sale are sure to be highly sought after.

“An additional benefit to our breeders at sales like Magic Millions and Easter is how well his progeny are sought after by international buyers and a comfort to those buyers in being able to access a sire line they are familiar with, and to be confident to buy and either race here or to export.”

“It gives me great pleasure to see the success Bob Peters had on the weekend with his unbeaten filly Perfect Reflection, winning the Kingston Town Classic, the first three-year-old filly to ever achieve the feat.”

“Bob has been a great supporter of our stallions and in particular More Than Ready over the years and it is great to see him get the just returns; he certainly has a couple valuable fillies there now.”