Victoria Derby Is No Longer A Payne Barrier 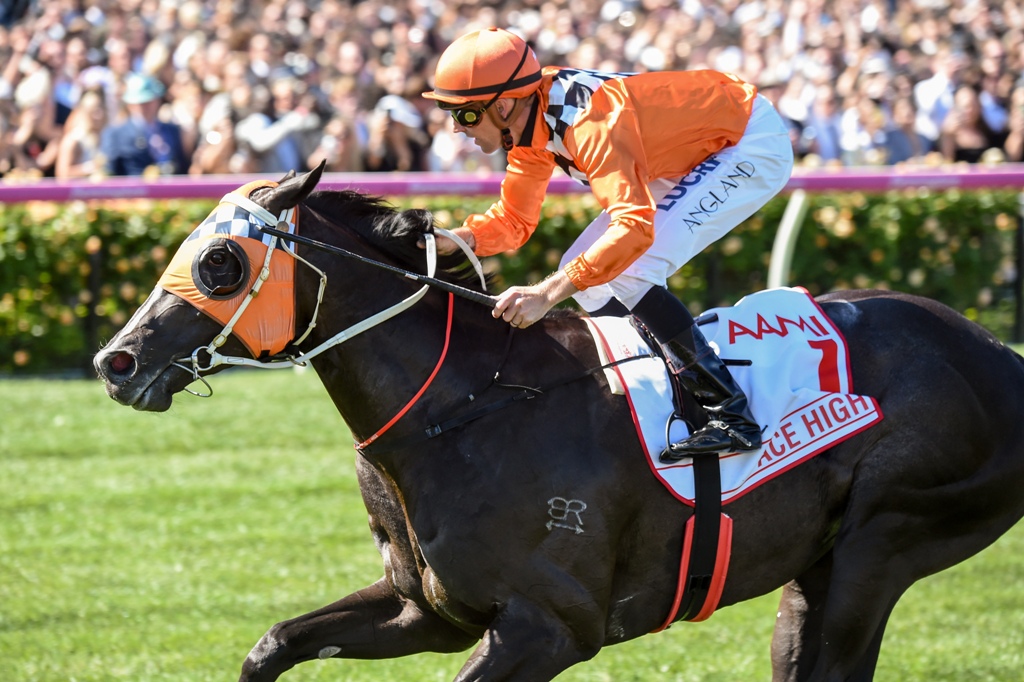 Former South African trainer, David Payne, has saddled up a lot of Group One winners throughout his illustrious career … 108 of them in fact.

However, until Saturday, he’d never trained a Victoria Derby winner. One of the few still on the bucket list.

Sure, he’d come close a couple of times … fourth with Criterion in 2013 and second with Praecido in 2010, but still no cigar.

All that changed in the 2017 $1.5 million Group One AAMI Victoria Derby though, courtesy of a brilliant performance from Ace High, who trumped his rivals over the testing 2500m at Flemington.

Ace High had been sent out a $7 favourite for the Derby courtesy of lead up wins in the Group Three Gloaming Stakes and, at his most recent outing, the Group One Spring Champion Stakes, where he edged out his Derby rival, Tangled, by a lip.

Heading out onto the track on Saturday, commentators suggested Ace High looked a bit ‘colty’ in the parade ring and that his mind might be elsewhere, while matters weren’t helped when Ace High was caught three and four wide early in the piece.

However, courtesy of jockey Tye Angland, Ace High was well poised by the 300m and the colt shot clear over the final stages to score with two lengths to spare.

Impressive to say the very least.

It was just reward for Angland who had skipped his brother’s wedding to ride Ace High in the Spring Champion and, despite a number of placings, it was also the jockey’s first winner in Melbourne. What a race to break your duck on!

Meanwhile, an elated Payne – who took up training in Australia in 2002 after a highly successful career in his native South Africa – admitted he was concerned early in the race, but his long laid strategy for the colt had paid dividends.

“It doesn’t always come together, but this (the Derby) has been planned for six months and it all just fell into place,” Payne reveals. “I’ve always wanted to win a Group One at Flemington during the Melbourne Cup carnival … the atmosphere is fantastic and I was beginning to think it wasn’t going to happen.”

Not surprisingly, the authority of Ace High’s win had talk soon turning to the 2018 Melbourne Cup with both jockey and trainer enthused at the prospect.

“Next year’s Cox Plate would be my first choice,” a clearly elated Cordina admits. “He’s a real on pace horse and I reckon the 2040m at Moonee Valley would be a walk up start for him.”

One of 106 stakes winners world-wide for the sorely missed Sadler’s Wells stallion, High Chaparral, Ace High is from a Redoute’s Choice mare, Come Sunday and closely related to several stakes winners, all the while hailing from the family of some successful sires.

So, has Cordina’s phone been ringing hot from prospective stud farms since Saturday night?

“I’ve had a few feelers, but I’m not even considering a stud career for him at this stage,” Cordina adds. “I’m looking forward to watching him go around in the autumn classics and reckon his versatility will also see him do well in races like the (Group One) Randwick Guineas over 1600m as well.”

Cordina was one of the first owners to jump on board when Payne shifted to Australia, and the pair has successfully campaigned horses like the aforementioned Praecido, although Ace High is their first Group One winner together.

(Cordina was also a part-owner of 2000 Australian Derby winner, Fairway, and has paid the feed bills for Group winners Centennial Park and Gallant Tess).

“Saturday was by far the best feeling I’ve had on a racetrack, but I just love racing overall,” Cordina explains. “I flew back to Sydney on Saturday night because I’ve got a runner at Randwick on Tuesday (Melbourne Cup day) called All Too Soon, that is out my mare Gallant Tess.

“I don’t care if it’s Flemington, Randwick or a country track. Every winner is terrific and you take them whenever you can.”

Ace High was purchased by Payne Racing for $130,000 at the 2016 Gold Coast Magic Millions Yearling Sale when offered by Bell River Thoroughbreds on behalf of breeder, Bruce Reid Racing.

The Victoria Derby has now taken Ace High’s tally to four wins and a second from 12 starts for $1,408,375 in prizemoney.