Artie Is Flying After A Group One Result 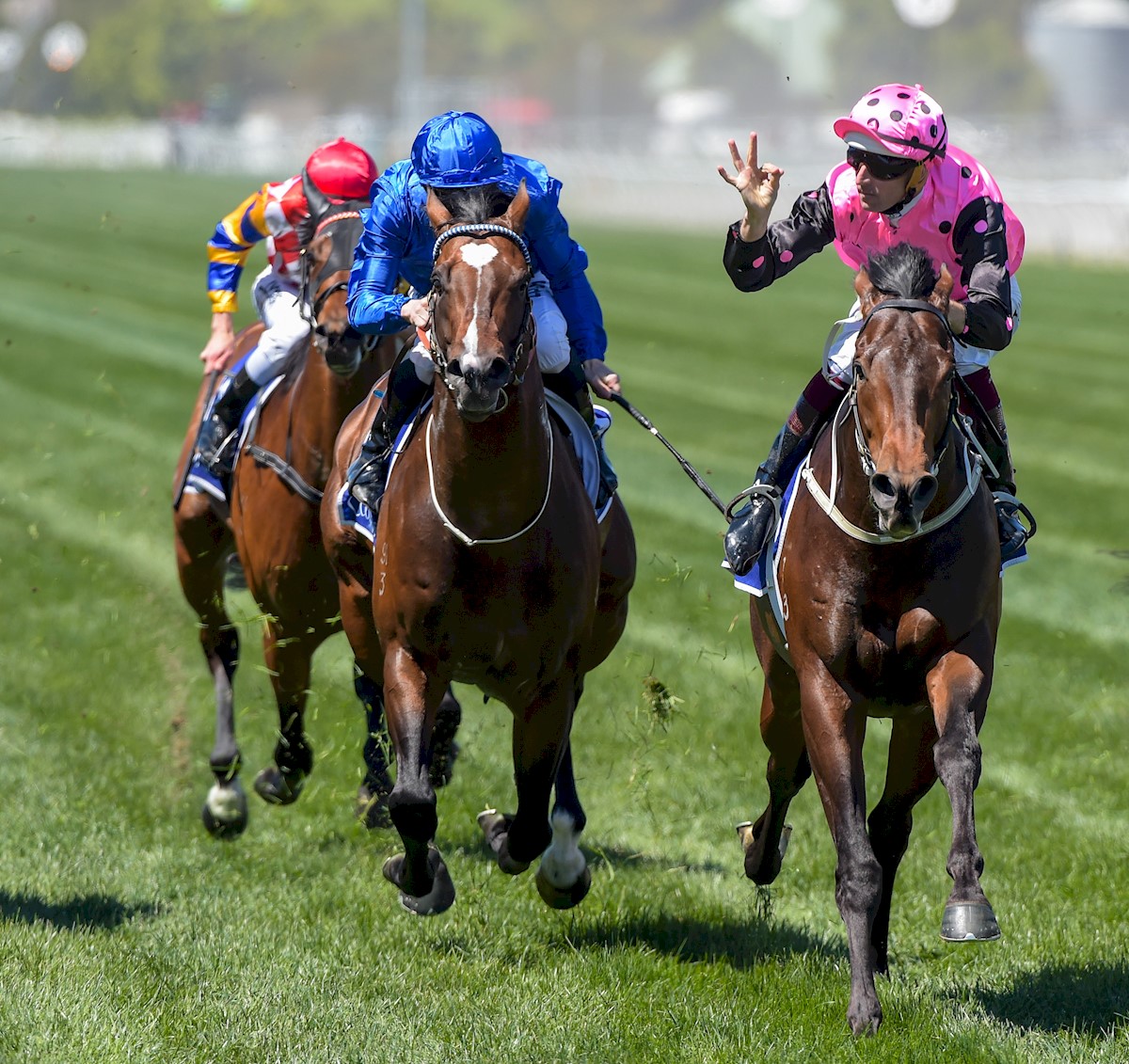 It says a lot about the depth of Saturday’s Group One Coolmore Stud Stakes field that Flying Artie was on the fifth line of betting against just seven rivals.

Punters were leaning toward Golden Rose winner, Astern ($2.80), but there was also a lot of money for Flying Artie’s stablemate, Extreme Choice ($3.60).

Star Turn and the previously unbeaten, Russian Revolution, were hardly friendless either.

However, Flying Artie defied expectations and was clearly superior down the Flemington straight, assuring both a big payday and a future in the stallion barn.

The Coolmore was also Flying Artie’s initial Group One success, but – hindsight aside – he was always heading that way.

Having just his sixth outing on Saturday, each at stakes level, Flying Artie was beaten a whisker on debut last November in the Maribyrnong Plate, won the Blue Diamond Prelude, finished second to Extreme Choice in the Group One Blue Diamond, third behind Capitalist and Yankee Rose in the Golden Slipper and, since resuming, won the Blue Sapphire and now the Coolmore.

It’s certainly been an interesting trip from the yearling sale barn at Inglis’ Newmarket complex to the hallowed surrounds of Flemington’s winners’ circle.

Offered by Goodwood Farm at the second session of last year’s Australian Easter Yearling Sale – the only Artie Schiller at the auction – Flying Artie was initially passed in.

Enter Paul Whelan. In one of those freak occurrences that occasionally befall us all (if we’re lucky!) Whelan had earlier taken a breather from his own Luskin Park draft at Easter to have a wander and catch up with some fellow vendors.

Whelan takes up the story: “I was walking down near the Goodwood Farm draft and this colt came around the corner. I thought what a ripper of a horse … big, strong and correct. Seemed to have a really good temperament too.

“We normally purchase fillies to race as broodmare prospects but I couldn’t get this bloke out of my head.

“When I got back home and saw he’d been passed in just shy of his $50,000 reserve, I thought to myself, ‘why not?’, so I purchased the horse and put my kids into him. They were all very happy … especially now. In fact, some 24 hours after the race they’re still out celebrating. I also asked Wilf Mula, a good friend of mine, if he’d like to come into the colt as well.”

Dare we say an even better friend after Saturday!

A former long-serving Minister in the NSW government, Whelan purchased the 125-acre Luskin Park in the Hunter Valley 16 years ago, a property made famous in the 1970s as the birthplace of the legendary Luskin Star.

Luskin Park has raised and sold a string of notable gallopers – including Group One winners, Foxwedge and Rock Classic (also raced by Whelan) – and Flying Artie’s owner is confident the colt will continue to improve.

“I think he just flew under everyone’s radar before the Coolmore and I wasn’t surprised he put in such a good run when he got back to Flemington,” Whelan adds. “That was just such a terrific lineup in the Coolmore … for instance, it’s as good a benchmark as any when John O’Shea says that Astern is the best horse he’s ever trained.

“I’ve fielded quite a few calls regarding Flying Artie’s future as a stallion – a natural consequence of what he did on Saturday – but nothing definite at this stage. I would be surprised if he doesn’t go on to win a couple more Group Ones in the autumn.”

A Breeders’ Cup Mile winning son of El Prado, Artie Schiller stands at Emirates Park in NSW and has produced 34 stakes winners in both hemispheres, with two Group One winners apiece in Australia and North America.

“That was terrific to see Flying Artie get up against such top company on Saturday,” Emirates Park Stud Manager, Peter Boyle enthused. “Naturally enough, there’s been quite a bit of interest in Artie Schiller and the dam of Flying Artie (Flying Ruby) was covered by him recently.”

“We foaled him down at here at Goodwood and he was a very athletic colt. Incredible shoulder and a terrific walking type. His mother, Flying Ruby, is a real looker too,” Tibbey reveals. “I always thought Flying Artie would make a very good 3YO, so the fact that he raced so well as a 2YO was a little unexpected.

“I’m really happy for Paul and his family. I’m guessing he’s very happy he chose that time to walk by our draft.

A familiar face at major yearling sales, Tibbey had previously worked at Woodlands and Emirates Park before purchasing her Goodwood Farm at Murrurundi some 20 years ago.

“When I went looking for a farm to buy, I knew what I wanted and was determined it had to be exactly what I was after.”

Two Group One winners in eight days? Looks like she found it.

HOOFNOTE: Flying Artie is closely related to Horse of the Year, Better Loosen Up, whose eight Group One victories included the LKS Mackinnon Stakes on Derby Day in 1990 – the day that David Hayes trained record six Group winners at Flemington.