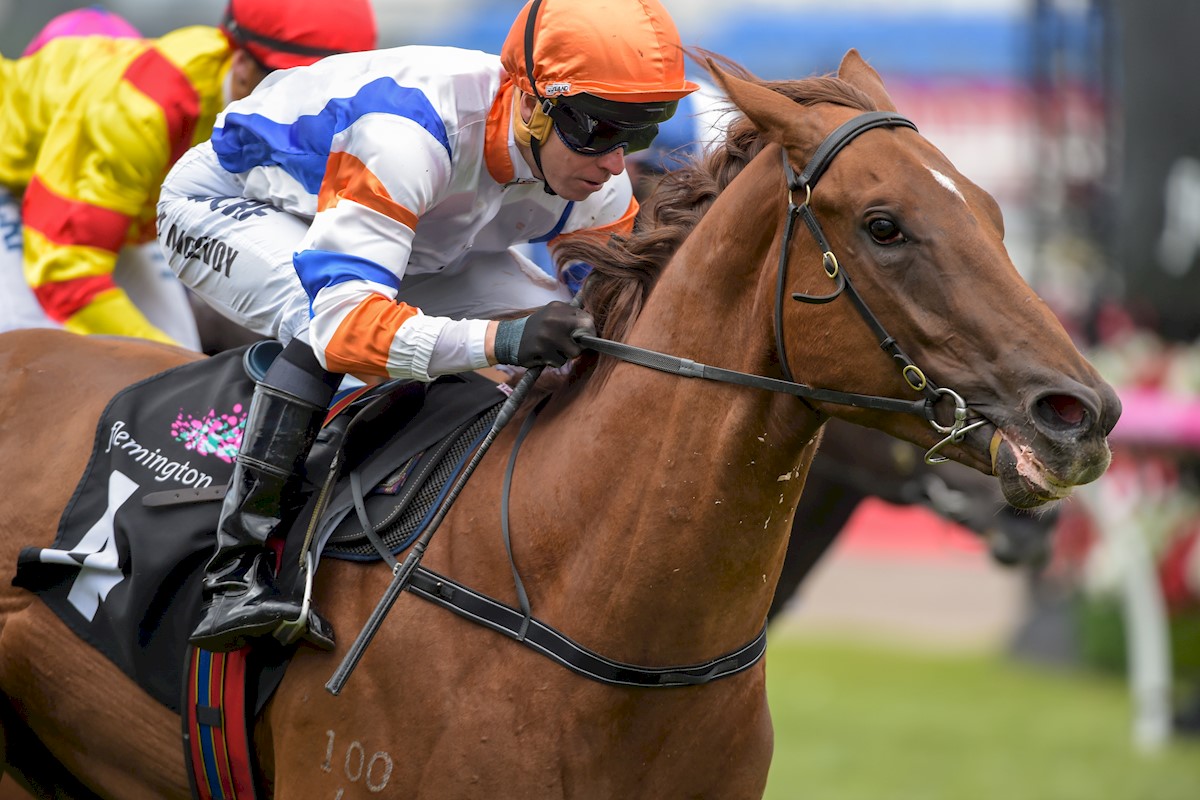 Peter Robinson loves his racing. Always has and, if possible, even more so after Saturday.

Last Friday, Robinson and his wife, Jen, his 83 year old father-in-law, Jack Stott and wife, Jean, decamped from their Merewether base (near Newcastle) and flew to Melbourne to watch their colt, Aspect, make his debut in the Group Three Maribyrnong Plate at Flemington.

“Aspect’s stablemate, Azazel, was favoured to win, but we thought to ourselves, ‘what’s the worse that can happen? … we end up having a great weekend in Melbourne’,” Robinson points out. “Tony (McEvoy) told us quite a few months ago that Aspect had plenty of ability but probably thought Azazel would have the edge on Saturday. We’d have been happy if Aspect had just run a place.”

Aspect did end up running a place, but much to Robinson & co.’s delight, it turned out to be first place.

Heading down the outside rail, Aspect went “straight as a gun barrel” according to McEvoy, adding that “he’s a very good, quality colt who really impressed me. The length of his stride at the finish was fantastic and, we’ll set him aside now until the autumn”.

All music to Robinson’s ears who explained that he first got into racehorse ownership over 20 years ago, had a bit of a break in between due to business commitments and took it up anew around six or seven years back.

“I’ve got four or five that I race with my father-in-law, while I also have shares in four or five horses with (former champion golfer) Jack Newton,” Robinson adds. “I’ve had a Listed winner before but Aspect is my first Group winner.

“We raced Aspect’s mother (Innishbeg) and she won five races for us, but hurt a knee and so we sent her to stud. I only breed from two mares … I’m really just a hobbyist and not in it for the gambling – I love racing.

“It was decided to send Innishbeg to Vinery and her first foal was Brown Ben, by Big Brown, and he won at Morphettville on Derby Day.

“The next foal (by Testa Rossa) sadly died but the following spring she was sent to Pluck and she’s come up with Aspect.

“Adam (White) at Vinery told me early in the piece what a nice foal Aspect was and so it wasn’t too hard a decision to send her back to Pluck again this spring where she’s since been tested in foal.

“I was approached by sales companies to put him (Aspect) through a yearling sale auction, but the decision was made to race him and, after Saturday, it turns out it was the right decision.

“You can’t keep them all obviously and we’ve got a Testa Rossa yearling out of the mare that we’ll decide what to do with shortly, but it’s certainly a good position to be in.

“They do a great job at Vinery … Jack (Stott) heads across to Vinery a few times a year to see the mare and I try and get across to the stud as well when I can.

“He’s a really good stallion that Pluck and we’re very happy to have been responsible for breeding his first Group winner!”

With his oldest runners now 3YOs, Aspect might be Pluck’s first black type winner, but he’s been knocking on the door of late, according to Vinery’s Nominations & Sales Manager, Adam White.

“We’ve been thrilled with what Pluck has achieved from his first couple of crops,” White enthused. “He now has a Group winner, two other stakes performers – including Lucky Louie, who ran a very good second for Anthony Cummings in the Ottawa Stakes at Flemington on Cup Day – and, amazingly, four other winners that have run fourth in stakes races.

“It’s also pleasing that both Aspect and Lucky Louie were foaled down at raised at Vinery too.

“Vinery purchased Pluck after he had won the Breeders’ Cup Juvenile as we thought he’d make a great fit alongside his sire, More Than Ready.

“It’s been a memorable spring carnival for the Vinery stallions because, aside from Pluck, More Than Ready is the sire of Victorian Derby winner, Prized Icon, and Saturday’s Group Two Lee Steere winner, Perfect Reflection, Jameka won the Caulfield Cup for Myboycharlie and Testa Rossa (Ellicazoom) had a stakes winner on Cup Day as well.”