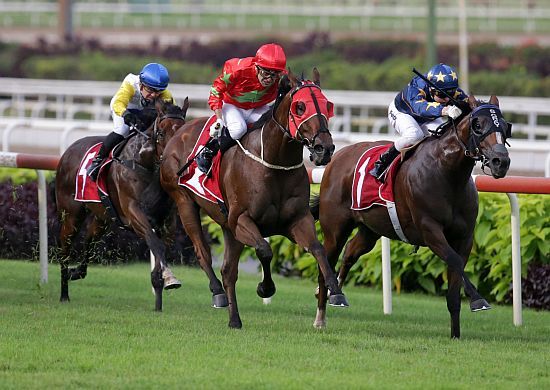 It was certainly a night to remember. Saturday’s Singapore program at Kranji featured three Group Ones – the Lion City Cup, Singapore Guineas and Kranji Mile – with Australian-breds acing each of them.

Zoustar 3YO, Top Knight was hugely impressive in the Singapore Guineas, relegating Mo Almighty to third, while Australian-breds went 1-2 in the Kranji Mile after Hong Kong visitor, Southern Legend – won the race for the second year in a row – proving too strong for Hong Kong Group winner, Blizzard.

Aramco’s Lion City Cup was emotion charged for trainer, Baertschiger – his first Group One victory. Baertschiger had followed his father, Don, to Singapore in 1993 when only 20 years old, taking up the stable’s reins in 2012.

(Don’s final Group One was, ironically, with the Scenic sprinter, Capablanca, winner of the 2008 Lion City Cup).

It had been a “rough week” for Aramco’s trainer, having to attend his aunt’s funeral, and he was quick to praise his staff: “they’ve done a great job while I was away,” Baertschiger points out. “This horse has really come on this season and I made the right decision not to run him in the Rocket Man Sprint, so it’s all worked out well. He did an amazing job to beat the best sprinter (Lim’s Cruiser) at level weights.”

A son of the prolific Magic Albert, Aramco is a half brother to 2014 Golden Slipper winner, Mossfun, and was sold by Fairview Park to Sheikh Mohammed bin Khalifa Al Maktoum for $750,000 at the 2014 Inglis Australian Easter Yearling Sale … the most expensive Magic Albert ever sold at auction.

Initially racing as Mawahibb, Aramco had 10 starts in Australia for Team Hawkes, with a solitary success at Moonee Valley, but has gone on to compile a more than handy record of eight wins and six placings from 20 outings in Singapore.

Magic Albert, meanwhile, is preparing for his fourth season at Kooringal Stud in NSW’s Riverina, after spending his first years at stud based at Yarraman Park.

As for Singapore Guineas winner, Top Knight, he may well have shown himself up to be the most promising horse in the region with his thumping victory: a sixth from only nine starts, which also includes two minor placings.

Given the prices that Widden Stud’s Zoustar commands at yearling sales now, Top Knight was an absolute bargain at $65,000 when sold by breeder, Elswick Park at the 2017 Gold Coast Magic Millions March Yearling Sale. He would return to the Gold Coast later that year to fetch $130,000 at the 2YOs In Training Sale.

Resuming in March, Top Knight won the Kranji Stakes, finished a lip second in the 3YO Sprint, won the Singapore 3YO Classic and this time the Guineas.

“He’s had a beautiful prep and is such an easy horse to train,” Top Knight’s conditioner, Michael Clements enthused.

Sire of eight stakes winners from his two crops of racing age, including multiple Group One winner, Sunlight, Top Knight is Zoustar’s first black type winner outside of Australia.

As for the Caspar Fownes trained, Southern Legend, the Kranji Mile victory was his first success since, well, last year’s Kranji Mile.

However, the Corumbene Stud bred 6YO has been far from idle in the last 12 months with Group One placings in the BOCHK Wealth Management Jockey Club Mile, the Hong Kong Mile, Stewards’ Cup and Gold Cup, along with a recent trip to Meydan where he finished midfield in the Group One Dubai Turf.

Clearly Southern Legend was back to his best on Saturday night though, running a faster time than 2018 and scoring with relative ease.

“He just loves Singapore and travelled beautifully,” a delighted Fownes explains. “He’s been looking a treat and was just phenomenal in the straight.”

From the family of Group One winning sprinter and sire, Charge Forward, Southern Legend was offered by Corumbene Stud at the 2014 Inglis Australian Easter Yearling Sale where he was knocked down to Carmel Size and Neville Begg for $280,000.