Aussies Fire Up In Singapore 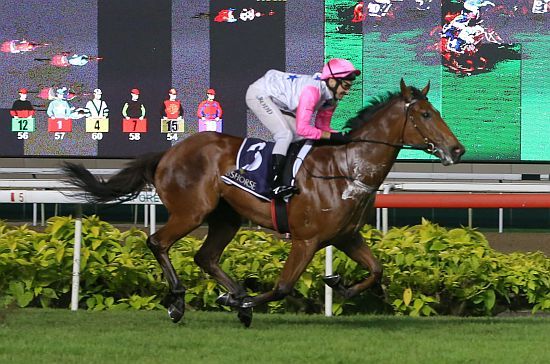 The Whittenbury family has long been associated with racetrack success in Australia, breeding and racing such luminaries as Group One Emirates Stakes winner, Titanic Jack, Ponton Flyer (Group Two winner and multiple stakes producer) and the Group One placed Miss Octopussy.

Last Friday in Singapore, Glenn Whittenbury added another to the honour roll with exciting 2YO, Inferno defeating fellow Australian-bred, Rocket Star in the Group Two Aushorse Golden Horseshoe Final over 1200m at Kranji.

It was the ninth running of the Aushorse Golden Horseshoe and arguably the most thrilling after the Cliff Brown trained, Inferno, stormed to the lead over the final stages to record a resounding victory.

Bred by Westbury Stud, Inferno becomes the 82nd stakes winner for Danehill stallion, Holy Roman Emperor and is out of Spina Rosa, a close relation in blood to dual Group One winner, Lotteria.

Initially sold by Newhaven Park for $10,000 at the 2017 Magic Millions National Weanling Sale, Inferno would be pinhooked as a yearling where he was knocked down to Brown for $140,000.

“I’ve known Cliff (Brown) for a long time – back when he was training in Victoria – and while he’s a great trainer, he’s an even better human being,” Glenn Whittenbury enthused after Friday’s big win. “I first took horses up to Singapore in 2012 – a couple of home-breds – and currently have seven in work with Cliff. We usually purchase one or two each year to race in Singapore.

“I raced Debt Collector who was Horse of the Year in Singapore but we don’t usually have that many 2YOs. That said, we are very, very happy to win the Golden Horseshoe with Inferno and it’s a terrific series. Great innovation for racing up there.”

A land developer based in Victoria, Whittenbury’s Baree Pastoral also has half a dozen in training with Tom Hughes at Flemington, along with four mares at Phoenix Broodmare Farm in Victoria’s north east.

With two wins from as many starts, Inferno will now be tipped out for a spell and, according to Brown, return for the Group Three Saas Fee Stakes in November.

Moving to Singapore 11 years ago where he has been leading trainer by prizemoney on multiple occasions, Brown was a leading trainer in Victoria where his Group One successes included Cheviot, Markham and Tarnpir Lane.

However, despite having several Group winning juveniles on home turf and three 2YO winners in Singapore this season, Brown claims he’s “bloody hopeless” when it comes to training 2YOs. A fairly harsh self-assessment given the authority of Inferno’s Group victory and obvious promise!

“He (Inferno) is a lovely type of horse but full marks to Chris Bock who works for me up here,” Brown insists. “Chris is a great judge of horses and he was the one who picked him out at the sales.”

Although Inferno took the major prize on Friday, it would be runner-up, Rocket Star who strode away with the S$70,000 Aushorse bonus for the most prizemoney won throughout the series.

Meanwhile, in a big weekend for Australian-breds, Sun Marshal followed on from Jupiter Gold’s success last year by capturing the S$1 million Singapore Derby over 1800m at Kranji on Sunday.

Trained by Lee Freedman, Sun Marshal would also become the first Group One success in Singapore for another expat in jockey Joe Azzopardi. It was the 12th Derby success for Freedman, a Hall of Fame trainer in Australia before shifting to Singapore in 2017.

Originally racing in Australia as Han Xin for Gai Waterhouse and Adrian Bott, Sun Marshal was a five length winner at Caulfield and finished a close second to Heavenly Thought in the Group Two Grand Prix Stakes at Doomben.

Sun Marshal has now raced on 16 occasions for five wins and seven placings.

Offered by Element Hill at the 2016 Magic Millions Gold Coast Yearling Sale, Sun Marshal was knocked down to Sun Bloodstock for $200,000.

The Singapore Derby continues the run of global success for Sun Bloodstock which also stands Champion French 2YO, National Defense, and dual Australian Group One winner Palentino at its Victorian farm.

Aushorse CEO, Tom Reilly was on hand at Kranji to watch the Golden Horseshoe and Derby victories and quick to point out the continuing success of Australian-breds in the region: “It’s terrific to be here on the big days, but it’s important to note that the entire Horseshoe series has highlighted the graduates of Australian sales and is a great support to Singapore trainers and owners of 2YOs. It’s a united front too with our fellow sponsors being Inglis, Magic Millions and International Racehorse Transport.

“It’s also great to be able to tell everyone that the success rate by Australian-breds in Singapore Group races this season is around 80%!”