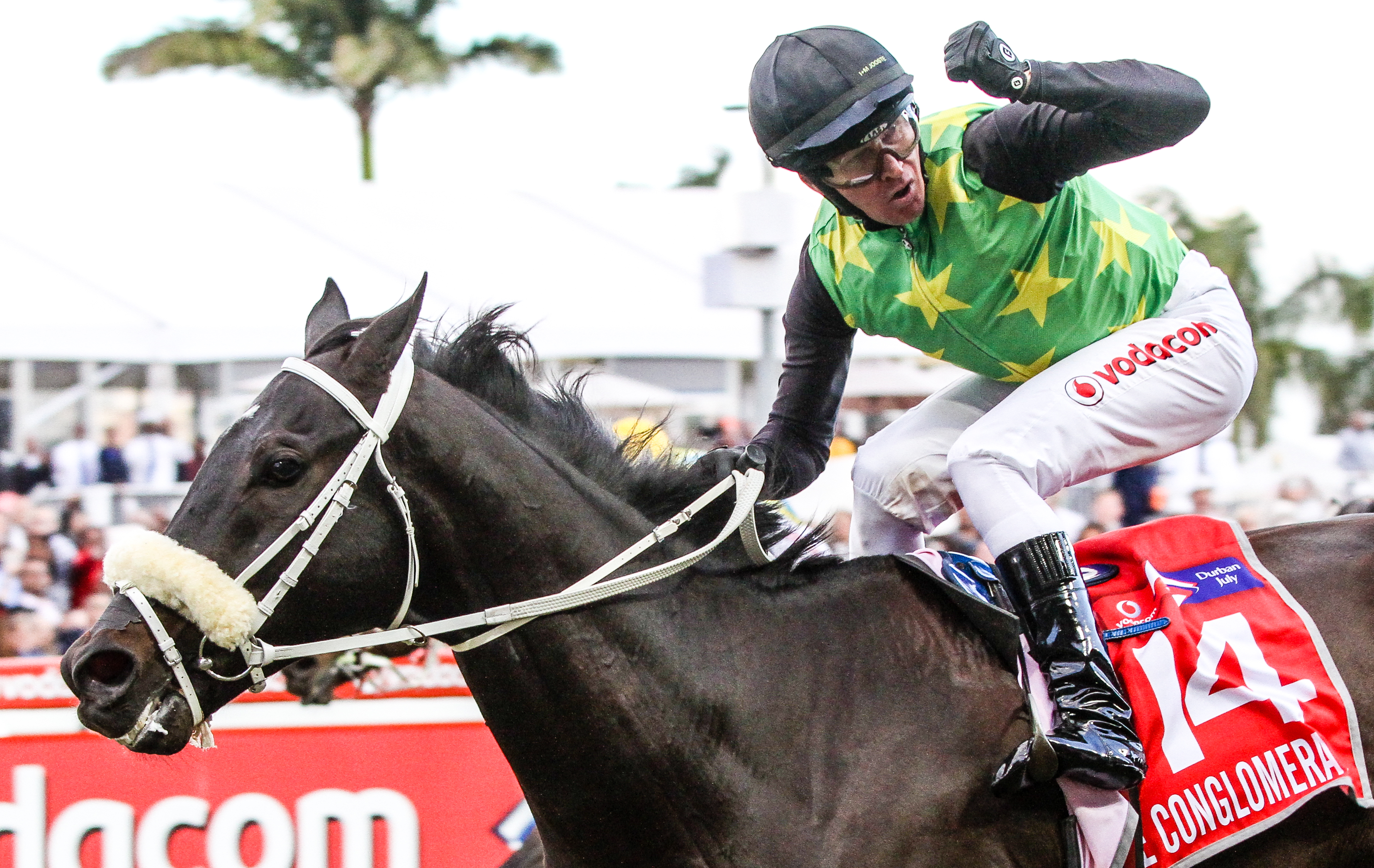 As they lined up at the 2200m start for the 2016 chapter of South Africa’s Vodacom Durban July on Saturday – early Sunday morning in Australia – few were paying much attention to the horse being loaded into the outside gate.

Peter Anastasiou was though. Some 10,000 kilometres away and watching the race on Sky Channel, Anastasiou hoped that the Joey Ramsden trained, The Conglomerate, could overcome the barrier, some mixed form and the best horses in South Africa to win the highly valued Group One.

Paying $26 locally, it’s fairly safe to say that Anastasiou presented a solitary beacon of faith, especially as the race commentator mentioned the other three Australian-bred runners but ran out of steam by the time he got to The Conglomerate.

None of that mattered to The Conglomerate though as he recorded the biggest win of his career in a race that many regard as South Africa’s finest.

It was some win. With jockey, Piere Strydom, managing to position The Conglomerate fourth in running shortly after the start, the flashy black son of Lonhro sat just off the pace until 300m out before bursting to the lead and holding off all challengers. Finishing a terrific third was another Australian-bred in Mac de Lago, who had won the Group One Greyville Gold Challenge at his previous outing.

Anastasiou doesn’t own The Conglomerate, nor did he breed him, but he had plenty of reasons to cheer.

After all, Anastasiou now owns The Conglomerate’s dam, Republic Lass, and will be looking to breed a very close relation this spring.

“I purchased her (Republic Lass) at the broodmare sale in 2013, in foal to Sepoy, for $105,000,” Anastasiou recalls. “I thought it was downright disrespectful to let such a good mare pass me by at that price.

“After all, she had won an Australian Oaks and a Ranvet – both Group Ones – and an Adrian Knox (Group Three).

“Great family too and everything she has had go the races has won – five from five.

“Naturally enough, we sent her back to Lonhro last year but she didn’t get in foal so, this spring, she’ll be covered by Lonhro’s son Pierro.”

That is more than likely to catch the attention of Derek Brugman, racing manager for The Conglomerate’s owners, Markus and Ingrid Jooste.

Brugman had spotted The Conglomerate at the 2013 Inglis Melbourne Premier Yearling Sale and told the Joostes, “you have to buy him … he’s your July horse”. $160,000 later, he was.

“I was right on the money, albeit a year late,” Brugman points out. “He (The Conglomerate) had no luck in the 2015 Durban July and after that he just wasn’t concentrating on the job at hand so we had him gelded. Even for the first couple of runs this season he wasn’t himself, but in the last few weeks he has really come together and I was confident heading into Saturday’s race.”

An elated Ramsden added: “Derek and I did a lot of leg work in Melbourne and this was the one horse we really wanted. He was the most impressive specimen.”

HOOFNOTE: While much of the glory, deservedly, surrounded The Conglomerate’s victory in the Durban July, it ended up being another exceptional day in South Africa for Australian-breds with Zodiac Ruler capturing the Group Two Golden Horseshoe over 1400m.

Trained by Justin Snaith, Zodiac Ruler was having only his second outing, having won over the same trip on debut on 15 June.