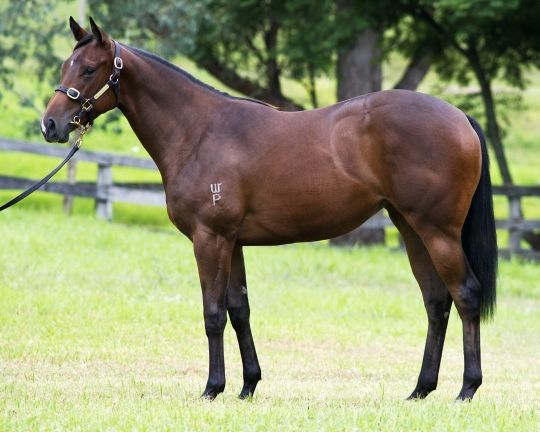 Australia has played a strong hand in arguably the world’s most famous race – the 2019 Investec Epsom Derby – with the Coolmore Stud owned winner, Anthony Van Dyck, hailing from Exceed And Excel mare, Believe’n’Succeed.

Despatched to Ireland after being purchased by Tom Magnier for $1.1 million at the 2014 Magic Millions Patinack Dispersal, Believe’n’Succeed was covered by Galileo, with the end result of that mating capturing the Epsom Derby on Saturday. Providing Aidan O’Brien with his seventh Derby success, Anthony Van Dyck’s five career victories also include three stakes wins in Ireland and multiple Group One placings.

Aside from the obvious delight shared by Team Coolmore, Willow Park Stud’s Glenn Burrows was pretty chuffed with the result too, given that he’s been a ‘believer’ … for a long time!

“She (Believe’n’Succeed) was sold to Mark Kavanagh for $300,000 at the 2007 Gold Coast Magic Millions Yearling Sale and is from the first crop of Exceed And Excel,” Burrows recalls. “I saw her win the (Group Three) Blue Diamond Prelude and was hugely impressed with the run … but not nearly as impressed as when she ran fourth in the (Group One) Blue Diamond.

“She drew the outside gate in the Diamond, had no luck in running, yet finished fourth, beaten a length. Huge run.

“When she came back as a 3YO she’d gone off the boil a bit, but I’d been negotiating with ‘Kav’ for a while about buying her. I ended up getting her for $350,000 … a bargain really for a well-bred, Group winning filly that cost only $50,000 more than her yearling price.

“Anyway, then I was faced with trying to find a client, but the first person I phoned – Michael Birchall – decided to take her.”

Believe’n’Suceed’s first visit to the breeding shed would be to meet Lonhro, a stablemate of Exceed And Excel at Darley.

“I thought it would be a terrific cross and Darley hadn’t tried it at all previously,” Burrows adds. “She ended up producing an absolutely cracking filly – as good as you’ll ever see – and we took her down to Easter.

“Darley had bred Believe’n’Succeed and sold her as a yearling and they ended up being the underbidder on her yearling before the filly was eventually knocked down to Gary Harding for $425,000.”

The filly would be named Bounding and, following eight victories including the Group One Railway Stakes and multiple Group One placings, became New Zealand’s Champion Sprinter of 2013/14.

“Gary and I struck up a really good relationship as a result of that sale and when he decided to sell Bounding, he put the mare through Willow Park at the 2016 Magic Millions National Broodmare Sale where she was knocked down to Barbara Banke of Stonestreet Thoroughbreds for $1.9 million. I understand she’s currently in foal to War Front,” Burrows explains.

Previously with Inglis for over 20 years, where he would eventually become Bloodstock Manager, Burrows established Willow Park Stud – 10 minutes north of Scone in NSW’s Hunter Valley – in the early 2000s. Farm graduates include Group One winners Samantha Miss (sold for $1.5 million as a yearling), Cosmic Endeavour and Road To Rock, while the sale of Princess Coup for $3 million at the 2009 Magic Millions National Broodmare Sale was a tremendous, well … coup. A real milestone.

However, you get the distinct impression that Burrows won’t be forgetting the 2019 Epsom Derby any time soon.

“It’s a huge thrill to know that the mother of an Epsom Derby winner used to roam around your paddocks. I just can’t get over the fact she produced a Derby winner … Believe’n’Succeed’s brother, Kuroshio was an out an out sprinter while the full sister, Agulhas was a stakes winner over 1050m. Speed, speed, speed.

“Let’s put it this way, it was a pretty tight finish to the Derby but he out sprinted them in the end!”

Believe’n’Succeed is among a long list of Australian-bred mares which Coolmore Stud has successfully imported to Europe, famously including Danehill’s Group winner, Milanova, the dam of Group winning Galileo filly, Pretty Perfect, who was knocked down for $5 million at the 2008 Inglis Easter Broodmare Sale.

Another Danehill mare in Hveger, a full sister to Elvstroem, has been a sensation for Coolmore’s Irish base too, producing – in the space of four seasons – Champion Highland Reel (8 Group Ones and now standing at Swettenham Stud in Victoria), 3-time Group winner and Irish Derby runnerup, Idaho and stakes winning 2YO, Cape of Good Hope, while Zouzou (dam of Zoustar), Champion Sprinter, Sea Siren, and dual Group One winner, Melito have all featured on the international giant’s broodmare roster.

HOOFNOTE: While in albeit less auspicious surroundings, Galileo added to his tally on Saturday, via another Australian-bred mare, when Pacific Ocean won his Maiden at Naval in Ireland.

The 3YO Pacific Ocean is the second foal of Aussie superstar, Atlantic Jewel, whose 10 wins from 11 starts included four Group Ones: All Aged Stakes, Thousand Guineas, Caulfield Sprint and Memsie Stakes.

While Atlantic Jewel was purchased as a yearling by Coolmore, international buyers are increasingly seeking out Australian breeding stock as statistics clearly show that our stakes winning fillies and mares are half as expensive as their equivalents in Europe and North America.