Australian Mare On The Front Foot At Keeneland 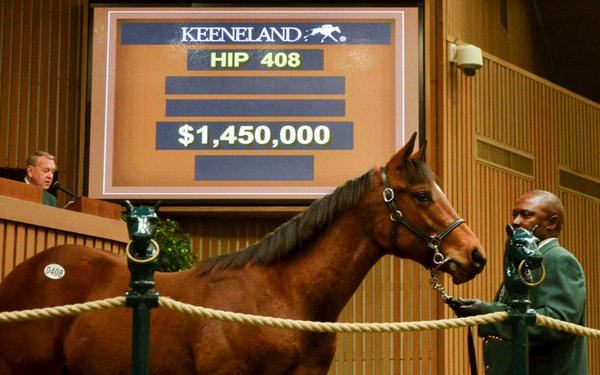 War Front colt from Hunter Valley bred broodmare, Drifting Cube, being knocked down for US$1.45 million.

The standing of top class Australian pedigrees was on display at the Keeneland November sale last week, with a War Front colt from Hunter Valley bred broodmare, Drifting Cube, being knocked down for US$1.45 million.

The purchase, by Coolmore’s M.V. Magnier, was the highest price for a weanling at the sale in 2016 and, in fact, the sixth most expensive weanling ever sold at Keeneland’s November auction.

Drifting Cube was purchased out of the Teeley Reduction at the 2014 Gold Coast Magic Millions National Broodmare Sale for A$1.1 million, by James Harron on behalf North America’s Hill ’n’ Dale Farm.

Hill ’n’ Dale also snapped up another Encosta de Lago mare in Taste of Heaven from the Teeley Reduction – this time for A$1.5 million – and, again, she is closely related to the incomparable Redoute’s Choice family.

Taste of Heaven was put in foal to Medaglia d’Oro – to Northern Hemisphere time – and her resultant filly was also consigned to Keeneland November as well where she was purchased by Julian Blaxland’s Blue Sky Bloodstock, on behalf of Queensland’s Aquis Farm, for US$525,000.

Hill ’n’ Dale owner, John Sikura, was clearly pleased with the results and told Blood-Horse: “It’s very fulfilling because I went to Australia and bought two mares … it was Southern Hemisphere and the pedigrees I bid on weren’t familiar. I took a deep breath and bought two really expensive maiden fillies from one of the best families in Australia. The Medaglia d’Oro filly sold well and this (War Front) colt sold fantastic, he’s a beautiful horse.

“When I got home, everyone wondered if I had lost my mind … but it worked out well.” Coupled with last week’s brilliant Breeders’ Cup Turf victory by Highland Reel – out of the Australian-bred mare, Hveger – you can imagine North American breeders will be taking a closer look at the Australian market in coming years.