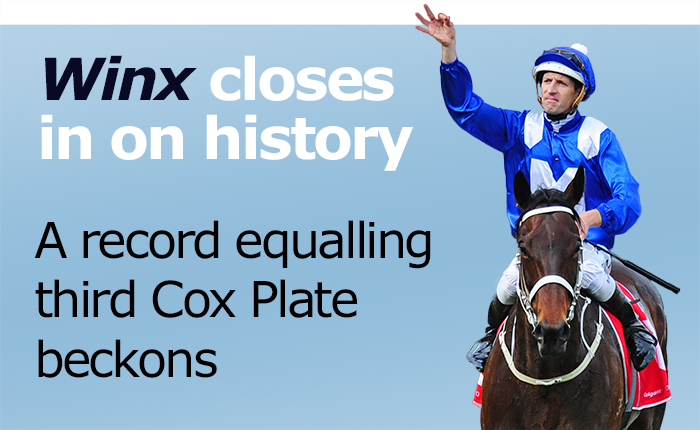 With Group One racing in both Sydney and Melbourne, last weekend signaled racing’s intention to dominate the Australian spring sporting landscape for the next six weeks.

It helps that all other major sports Down Under (Aussie Rules and Rugby League) have just finished their seasons – leaving a void for a sports-hungry population..

And into that space strode the mighty mare Winx. Recent wobbles (three wins all by less than two lengths) were banished from memory with an emphatic win at Flemington.

In Sydney – where nearly all the focus is on the final preparations ahead of this weekend’s inaugural Everest – three-year-olds with staying potential contested the Spring Champion Stakes, won by Ace High in a style that has quickly become a trademark.

The most-anticipated race of Winx’s spring so far confirmed her standing alongside the great racehorses of the Australian turf.

In winning the Turnbull Stakes, a Group One race over 2000m where top class horses clash with those heading for the major Cups handicaps, Winx (Street Cry) erased any concerns about her well-being ahead of her bid for a third Cox Plate.

Eased down by her jockey Hugh Bowman for a 6-1/2 length winning margin, it was the mare’s 14th Group One victory, her 21st win in succession and took her earnings to an incredible $13,777,925, with the promise of much more to come.

She now shares that haul of top-level wins with Kingston Town, a horse regarded as one of the greats in Australian racing folklore. Coincidentally, her next opportunity to add to that tally comes at Moonee Valley in three weeks, when she will attempt to match his thus far unique feat of winning three  Cox Plates in the early 1908s.

Her average winning margin in Melbourne now stands at 5.3 lengths and it would be a brave pundit to tip against her improving that statistic in the $3 million Cox Plate at Moonee Valley on October 28.

Left in Winx’s wake in the Turnbull were the English import Ventura Storm (Zoffany) and Humidor (Teofilo) but in finishing second and third respectively they remain at the forefront of betting on the $3 million Caulfield Cup over 2400m on October 21.

Sydney three-year-old Ace High has perfected an uncompromising style of racing that may well take him all the way to Victoria Derby success.

The son of High Chaparral made his own luck out in front at Randwick to win the $500,000 Spring Champion Stakes, a Group One race over 2000m for middle-distance three-year-olds that is often a stepping stone towards the $1.5 million Victoria Derby over 2500m on the first day of the Melbourne Cup carnival (November 4).

Trained by ex-South African David Payne, Ace High mixed it with some of Australia’s better two-year-olds earlier this year.

Despite being caught short on speed against his more precocious rivals, Ace High gave his trainer enough confidence to declare the Victoria Derby a long-range target.

Ridden from the front, Ace High steadily built the tempo to defy his opposition and the tactics worked again as he held off Tangled (Snitzel) in the Spring Champion.

Payne is well versed in training a Classic winner, having guided subsequent international traveller Criterion (Sebring) through two-and-a-half seasons of racing that counted the 2014 ATC Australian Derby as a standout win.

While the Australian racing season began in August, it is only in the past fortnight that two year-old racing has commenced.

And although it may have been new territory for the two-year-olds lining up for Victoria’s first juvenile race, the Maribyrnong Trial Stakes at Flemington, there were some familiar names in the winning connections.

Two-year-old racing also made its way to metropolitan level in Queensland at the Gold Coast.

You Know The One (Bullet Train) hugged the fence to win the colts and geldings division while Pony Power (Foxwedge) won the fillies section.

At Morphettville in Adelaide, Crockett (All American) justified an odds-on quote to win for trainer Tony McEvoy.

There are many races given the label ‘stallion making’, though, even in Australia, the Group 2 Roman Consul probably wouldn’t be the first to come to mind.

But as the honor roll for the 1200 metre sprint includes Exceed And Excel, Fastnet Rock and young stallions Brazen Beau, Exosphere and Zoustar, it has certainly an outstanding record of producing top class winners.

That list now includes Godolphin three-year-old Viridine, after the colt kept an unbeaten record at Randwick.

Despite wanting to fight his jockey Brenton Avdulla early in the race, the son of Poet’s Voice drew clear for a decisive win.

Trainer James Cummings has the Group One Coolmore Stud Stakes, a 1200m straight-course test at Flemington during the Melbourne Cup carnival, as Viridine’s spring goal.

Husband and wife training team Trent Busuttin and Natalie Young have strength in numbers for the Victoria Derby.

The Cranbourne stable could have as many as four runners in the Classic with UCI Stakes winner Main Stage (Reliable Man) rated the best of the quartet.

Despite his rider Michael Walker having to contend with a slipped saddle, Main Stage made it two wins from three sophomore starts when he swept widest from the back of the field to win the UCI, a Listed race over 1800m at Flemington.

From a VRC Oaks perspective, Bring Me Roses (High Chaparral) looks readymade for the Classic distance after winning the Group Two Edward Manifold Stakes over 1600m at Flemington.

Former champion jockey turned trainer Ron Quinton, who had a successful stint as stable rider with John Oxx in Ireland in the late 1980s, prepared another quinella in a stakes race for mares while lamenting the need to race Dixie Blossoms and Daysee Doom against each other.

It was a reverse of the result in the Group Two Golden Pendant over 1400m at Rosehill last month.

Both horses are heading to the Myer Stakes, a weight-for-age Group One race for fillies and mares over 1600m, run on the first day of the Melbourne Cup carnival.