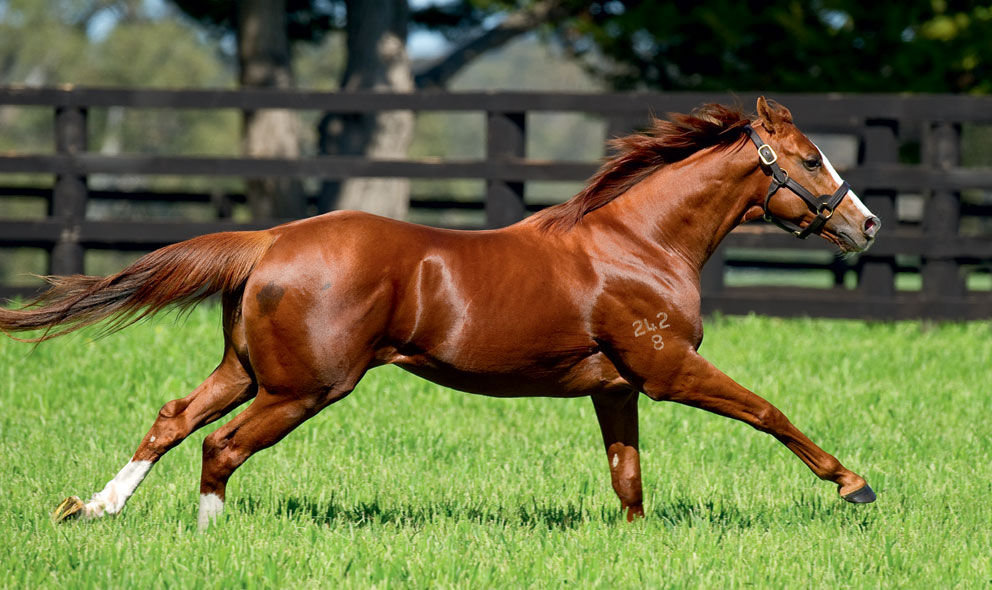 While a number of Australian racehorses have made their presence felt on the North American breeding landscape over the years – Shannon, Bernborough, Noholme, Pago Pago and Strawberry Road – the traffic to the United Kingdom has largely been one way,  i.e. north to south.

However, the breeding world is beginning to align with much more focus on Australian-bred stallions reverse-shuttling to the UK and Europe.

Having just completed his 12th consecutive season of shuttling between his northern and southern bases, the Darley Australia stallion has been ably supported by Choisir, Starspangledbanner and Fastnet Rock (sire of 2015 UK Group One winners Qualify, Diamondsandrubies and Fascinating Rock), but it’s a son of Exceed And Excel that has captured the imagination thus far in 2016.

Helmet (pictured), a dual Group One winner at two and Caulfield Guineas winner at three, has been a little bit slow off the mark with his first Australian-bred two year olds, but has had the opposite effect in the United Kingdom with four winners from his first five starters including the promising Kreb’s Cycle last week.

Darley Australia’s Head of Sales, Alastair Pulford, is clearly buoyed by Helmet’s success in the UK but is at something of a loss as to why it hasn’t been replicated in Australia: “It’s one of those anomalies of breeding. Who knows why stallions have success at different times in different hemispheres? It could be anything from the ground they race on to the genetics of the broodmare bands. We are confident that success will come in this part of the world though.

“Helmet has been quite popular over there, averaging around 100 mares per season and Danehill-line stallions seem to really work. Of course, Exceed And Excel has laid the groundwork with his tremendous record and hopefully Helmet ends up doing him proud on both sides of the equator.”

Newgate Farm also welcomed the recent news of Foxwedge’s first winner in the United Kingdom with 2YO filly, Seafront.

“Foxwedge (by Fastnet Rock) has been a regular shuttler to Whitsbury Manor for the past three seasons,” Newgate’s Bruce Slade points out. “He is having a year off from shuttling, but with five winners in Australia and New Zealand and now a winner in the northern hemisphere, we’re looking forward to a busy season.”