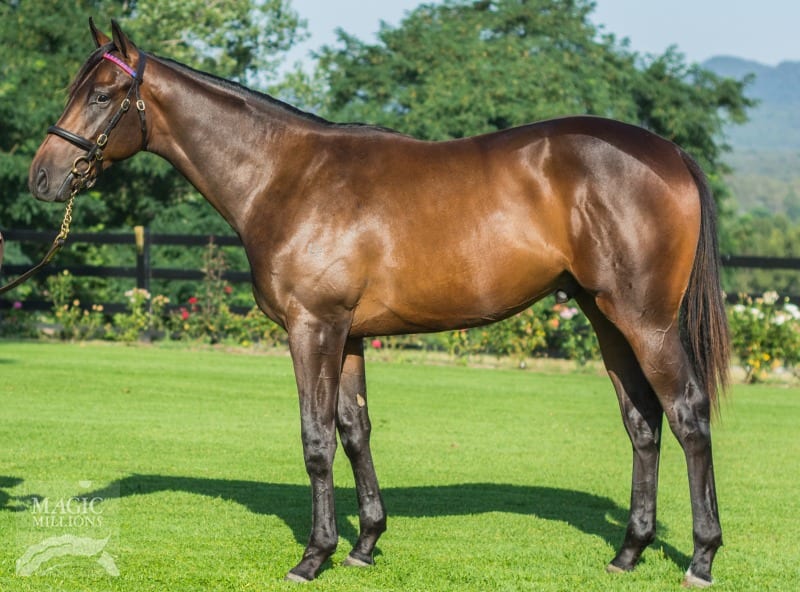 Just four weeks on from Oleksandra’s success in the Jaipur Stakes at Belmont Park, Australian-breds have gone close to securing a Group One double in the USA after the Chuck Lawrence trained, Paret, ran a blinder to grab second in the United Nations Stakes over 2200m at New Jersey’s Monmouth Park on Sunday morning.

A 5YO by the Acclamation stallion, Harbour Watch – who stood just the two seasons at Emirates Park – Paret was bred by Qatar Bloodstock and sold to Guy Mulcaster for $110,000, via the Tyreel Stud draft, at the 2016 Gold Coast Magic Millions Yearling Sale.

Originally racing out of the Chris Waller stable, Paret posted four wins from 16 outings (including three on the trot at Rosehill in July-August 2018) before heading to the States in April last year.

Although failing to shine at his first outing in North America – in the Group Two Pimlico Dixie Stakes – Paret’s subsequent six starts have all been at stakes level and he’s produced two wins (including the Listed Belmont Tiller Stakes leading into the United Nations), two seconds and two thirds.

All of which is great news for Willow Park Stud which will offer a Snitzel half sister to Paret at the Gold Coast Magic Millions National Broodmare Sale commencing next Monday.

Among 38 mares at the sale for Willow Park, Paret’s half sister, Grand Ariana was a winner at two and is in foal to All Too Hard.

Australian-breds have enjoyed remarkable success in the Macau-G1 Macau Derby with five of the last six winners of the richest race in Macau.

SACRED MAGNATE becomes the 5th Australian-bred winner of the Macau Group One Derby in the last 6 years. Bred by @MatthewSandblom, Sacred Magnate was sold by @NewgateFarm to Malua Bloodstock for $155,000 at the 2017 @mmsnippets Gold Coast Yearling Sale. #ItPaysToBuyAustralian https://t.co/lU8f5zhPxA

It’s doubtful though any of the previous winners produced a more exciting finish than Sunday’s 2020 chapter with Foxwedge 4YO, Sacred Magnate, getting up in the very last stride at Taipa racecourse.

Racing as Expansion in Australia, the Leon and Troy Corstens trained bay won at Yarra Valley on debut and filled the top three in four of six starts before heading to Macau.

Bred by Matthew Sandblom, Sacred Magnate was sold by Newgate Farm for $155,000 at the 2017 Gold Coast Magic Millions Yearling Sale and is a half brother to the stakes placed pair of Windjammer and Mediterranean, from the stakes horse, Ekali. Sacred Magnate is also closely related to Golden Slipper winner and sire, Capitalist.