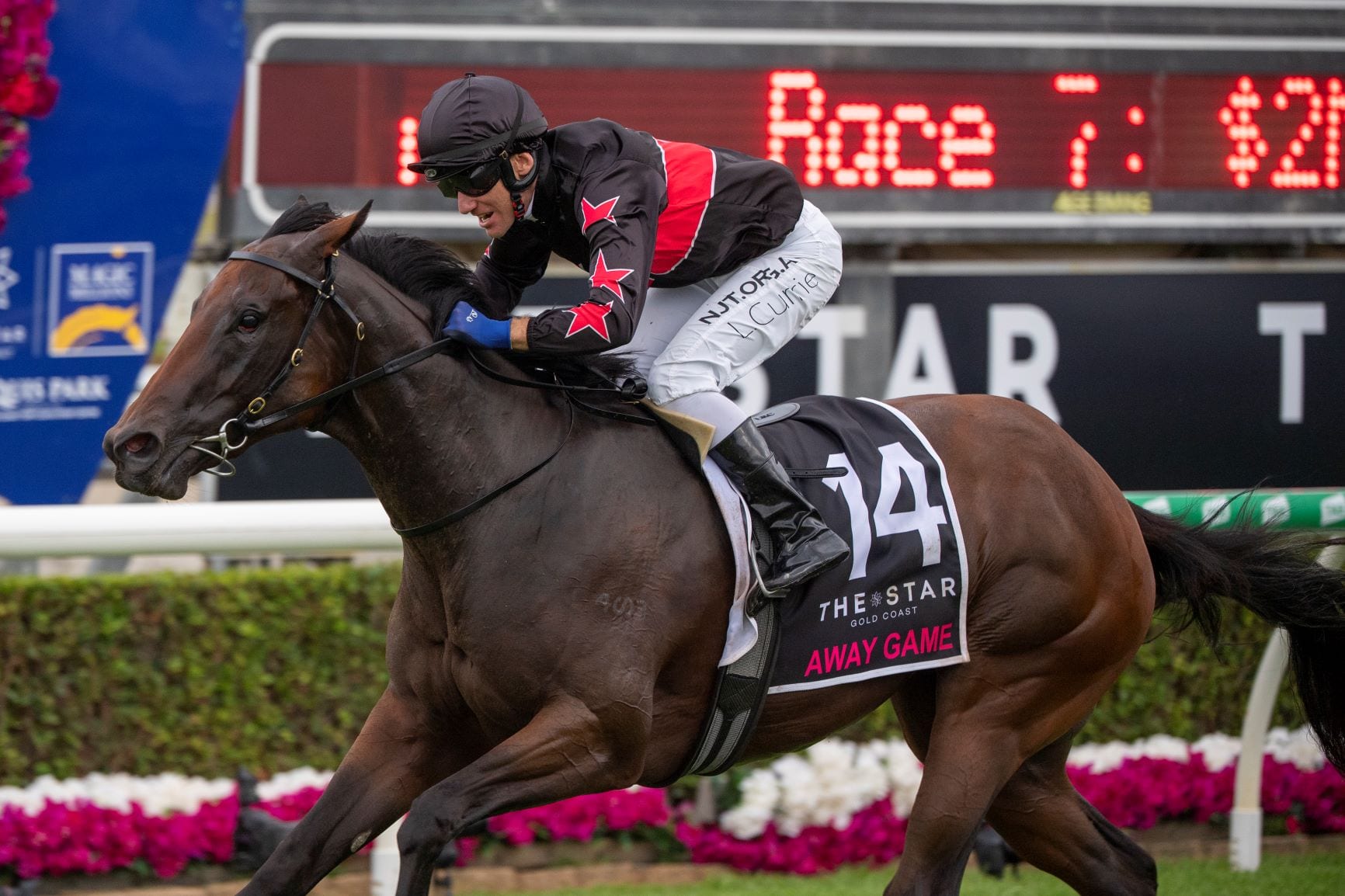 When Ciaron Maher welcomed a retired college volleyball player from the United States to his stable, thinking he would be sharing one of his best moments in racing with her was probably furthest from his mind.

Although her stay was brief, Hannah Mathiesen was a valued employee in the office of Maher’s Melbourne stable.

And as good fortune would have it, Mathiesen is now an even more highly regarded member of Maher’s team – as a Magic Millions-winning owner.

Maher and his co-trainer David Eustace have reaped a significant reward for their spend at last year’s yearling sales after the filly Away Game claimed the Magic Millions 2YO Classic at the Gold Coast.

Away Game was one of the outsiders but she won like a warm favourite to continue a trend of fillies having the better of the colts in the $2 million race for Millions sales graduates.

Her win will go down as a pivotal moment for Maher and Eustace and is seen as a triumph for overseas grassroots investment in Australian racing.

International owners winning Australia’s biggest races is nothing new but success on our shores is usually reserved for the sheikhs and dual-hemisphere stud operations.

It was almost that way again in a global finish to the Millions with the United States-based Stonestreet Farms providing the runner-up Stellar Pauline and the Godolphin colt Conceited taking the minor placing.

But with a curiosity for racing that turned into a passion after a chance meeting with leading United States trainer Bob Baffert and his Triple Crown winner American Pharoah, Mathiesen and her family are well on their way to leaving their own mark in the bloodstock world.

As part of a desire to learn more about thoroughbred racing as she established a small pinhooking business that operates as Oakmont Horse Club, Mathiesen arrived at Maher’s stables in 2018.

Her time in Australia was fleeting but she left to return to Rancho Santa Fe, California, having made two Magic Millions purchases to be trained by Maher.

It must have been some education.

Whether Maher is a brilliant teacher or Mathiesen is a fast learner isn’t known but it probably doesn’t matter as they celebrate a racing moment to savour.

The win was made even sweeter for the filly’s all-female group of owners who collected an extra $325,000 as part of the Magic Millions Racing Women’s Bonus.

At $425,000, the Snitzel filly sold out of the South Australian-based Mill Park Stud draft who now races as Away Game was easily the more expensive.

Away Game is a sister to the Adelaide Listed winner and Group Three-placed Modern Wonder as the sixth foal of two-year-old winner and stakes-performed Elusive Quality mare Elusive Wonder.

“She is the first Australian horse I have ever bought, ever owned so it is very special,” Mathiesen told a national television audience after Away Game romped away with the Millions.

“There’s seven women in the ownership. All our friends and family and our neighbours back home.”

Maher, who has expanded his stable in quickfire fashion over the past year, says he can only shake his head at the sliding doors moment that led to Away Game becoming the eighth filly in the past 11 years to win the Classic.

“Hannah only worked for me for a little bit, only a short time and she’s hit the board,” he said.

“This is one of the big two-year-old races of the year and it’s fantastic to get it and even better for Hannah and her family too.

“To come back out here and experience the whole thing and experience her first Magic Millions sales last year and to win the big race basically straight away, it’s phenomenal.”

Maher and Eustace are becoming a formidable training partnership, running stables in Victoria and NSW while developing an affinity for winning Queensland’s biggest races.

They had four stakes winners during last year’s Brisbane winter carnival and Away Game added to their 2019 Queensland haul with a Listed win in a Magic Millions lead-up race last month.

But the best is likely still to come after a buying spree at the 2019 yearling sales,

“We bought a lot of (now) two-year-olds last year and that was our main focus for this year,” Maher said.

“The filly (Away Game) is already a stakes winner and now to win the Magic Millions it is absolutely fantastic.”