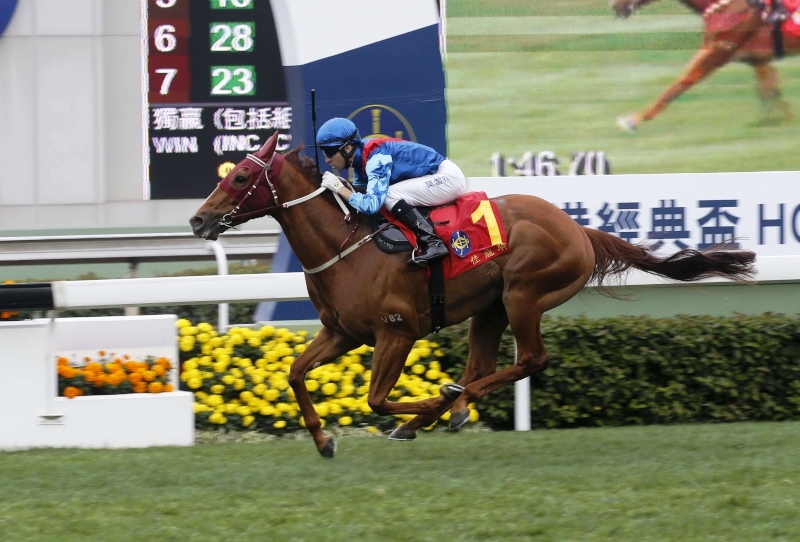 In less than a minute after Australian-bred, Rapper Dragon, crossed the line to win Sunday night’s Listed Hong Classic Cup at Sha Tin, the term ‘serious horse’ had been invoked at least twice by commentators.

‘Serious’ has entered the racing vernacular as something of a precursor to ‘champion’ and the referral appears to be spot on given the authority of Rapper Dragon’s victory: his sixth from 10 starts since arriving in Hong Kong in mid 2015.

(Runnerup in the 2015 Group One Champagne Stakes, Rapper Dragon has won seven from 15 overall for the equivalent of A$3.1 million in prizemoney).

Resuming with a midfield finish in December, Rapper Dragon won the Listed Hong Kong Classic Mile on 22 January in emphatic fashion and was a red hot favourite to repeat the dose on Sunday.

The Street Boss 4YO clearly justified the faith and never looked like he would do anything but win throughout the 1800m journey.

Rapper Dragon will now line up – almost certainly as favourite – in the Group One BMW Hong Kong Derby (2000m) on 19 March and both trainer and jockey rate highly his chances of completing a 4YO Classic Series clean sweep.

“He’s pretty smart, relaxed nicely in the race and indicates he’s going to handle the Derby distance, so I think I’ve got the best horse. In fact, he’s pretty close to the best horse I’ve ridden,” Joao Moreira claimed after Rapper Dragon recorded 1:46.98 for the 1800m … both a race record and the fastest time for that journey this season.

Trainer John Moore was similarly effusive and added: “We’re going into the Derby full of confidence. He’s definitely the horse to beat and is going to be joining the elite brigade in Hong Kong.”

Rapper Dragon was bred and initially raced by Henry Cojuangco – brother to Gooree Park Stud’s owner, Eduardo – who sold the horse to Hong Kong shortly before he passed away in 2015.

As Gooree Park’s Monica Cummings pointed out after Rapper Dragon won the Hong Kong Mile in January: “It was a real win-win for Henry. The horse had to be gelded early on and, as such, didn’t fit into Henry’s breeding plans, but he very much enjoyed racing the horse.

“Hong Kong made a significant offer for Rapper Dragon … too good an offer to refuse for a gelding and so he was sold, but Henry would have been very excited at the horse’s continued success.”