Local Lowers The Boom On Internationals 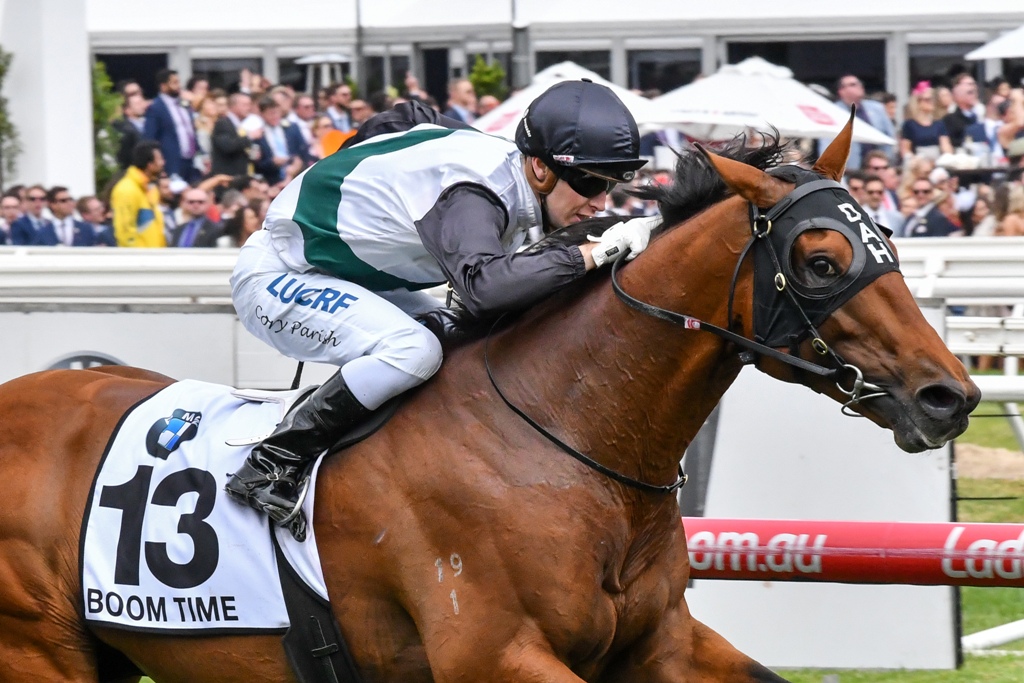 Talk about a Boom Time. The 2017 $3 million Group One BMW Caulfield Cup lineup was dominated by ‘internationals’, with 11 of the 17 runners, including favourite Johannes Vermeer, bred outside these shores.

However, history will record that the Australian-bred pair of Boom Time and Single Gaze would run one-two in Australia’s second most famous staying contest: both with what are nominally speed pedigrees. Go figure!

A Boom Time indeed. Co-trained by David Hayes, son Ben and nephew, Tom Dabernig, the 6YO, Boom Time, won a genuine contest, sneaking up along the rail over the final stages after sitting just off the leaders turning for home. Plaudits aplenty too for the small-statured, big-hearted, Single Gaze who held on gamely despite all the attention from the cap catchers.

Ironically, heading to the barriers, Boom Time was the least likely of the Lindsay Park Racing runners which also fielded Harlem (8th), Ventura Storm (13th) and He’s Our Rokkii (16th).

Boom Time would be sent out a $51 shot for the Caulfield Cup, only earning his place on the back of a promising fourth in the Group Two Herbert Power Stakes over the same journey just a week earlier.

“He (Boom Time) pulled up well from the Herbert Power but we weren’t going to run (in the Caulfield Cup),” Hayes reveals. “We thought he’d run well in the Caulfield Cup and beat more than would beat him, but I thought the stablemates had a bit more.

“When we realised that it wasn’t going to be a full field in the Caulfield Cup, we thought we may as well have a go … we did the sums and if he finished 10th or better, we’d get our money back.”

What’s more, Hayes owns Boom Time outright and “if he pulls up OK”, the horse will next tackle the $6 million Emirates Melbourne Cup at Flemington on 7 November.

Joining his legendary father, Colin, in the Australian Racing Hall of Fame in 2008, David Hayes is no stranger to spring success. Just months on from taking out his own training licence in 1990, Hayes won the 1990 Cox Plate with Better Loosen Up and would then capture a record six Group races on the 1990 Derby Day program.

Hayes trained in Hong Kong for nine years from 1996, returning to Australia’s training ranks in 2005 and, while winning a Caulfield Cup twice previously – Fraar (1993) and Tawqeet (2006) – he freely admits that he won’t forget Caulfield Cup day 2017 in a hurry.

“I had a couple of big days in Hong Kong (money-wise), but this would have to take the cake,” Hayes adds. “It’s not often that you not only get to train the winner of a ‘major’ but own the horse as well.”

Originally raced in West Australia by breeder, Kim Loxton, after the colt was passed in for $65,000 at the 2013 Perth Magic Millions Yearling Sale, Boom Time won for the first time at his 13th attempt, in the Listed Melvista Stakes.

Shortly after, Boom Time was sent east to the Peter Moody stable (having just the three outings from his Caulfield base) before switching to Lindsay Park in 2016.

Since then, Boom Time has won six of 15 outings, including the Listed Mornington Cup Prelude in February.

Boom Time is by the now retired, Golden Slipper winning, Danehill stallion, Flying Spur, whose 99 stakes winners include another Golden Slipper winner in Forensics, Mentality, Casino Prince, Sacred Star, Sleek Chassis and Juanmo. However, just two of his 13 individual Group One winners has won at the elite level in races further than a mile (Boom Time and Rosehill Guineas [2000m] winner Dealer Principal).

Meanwhile, Boom Time is one of three winners from the 7-time winner, Bit of a Ride, who is, in turn, a daughter of renowned speed source, Snippets.

Bit of a Ride is a three quarter sister in blood to Group Two winning sprinter Scandinavia, the dam of Group One winning sprinter and sire, Magnus (also by Flying Spur) and granddam of our greatest ever sprinter, Black Caviar.