Brave Win For In Tune Sprinter 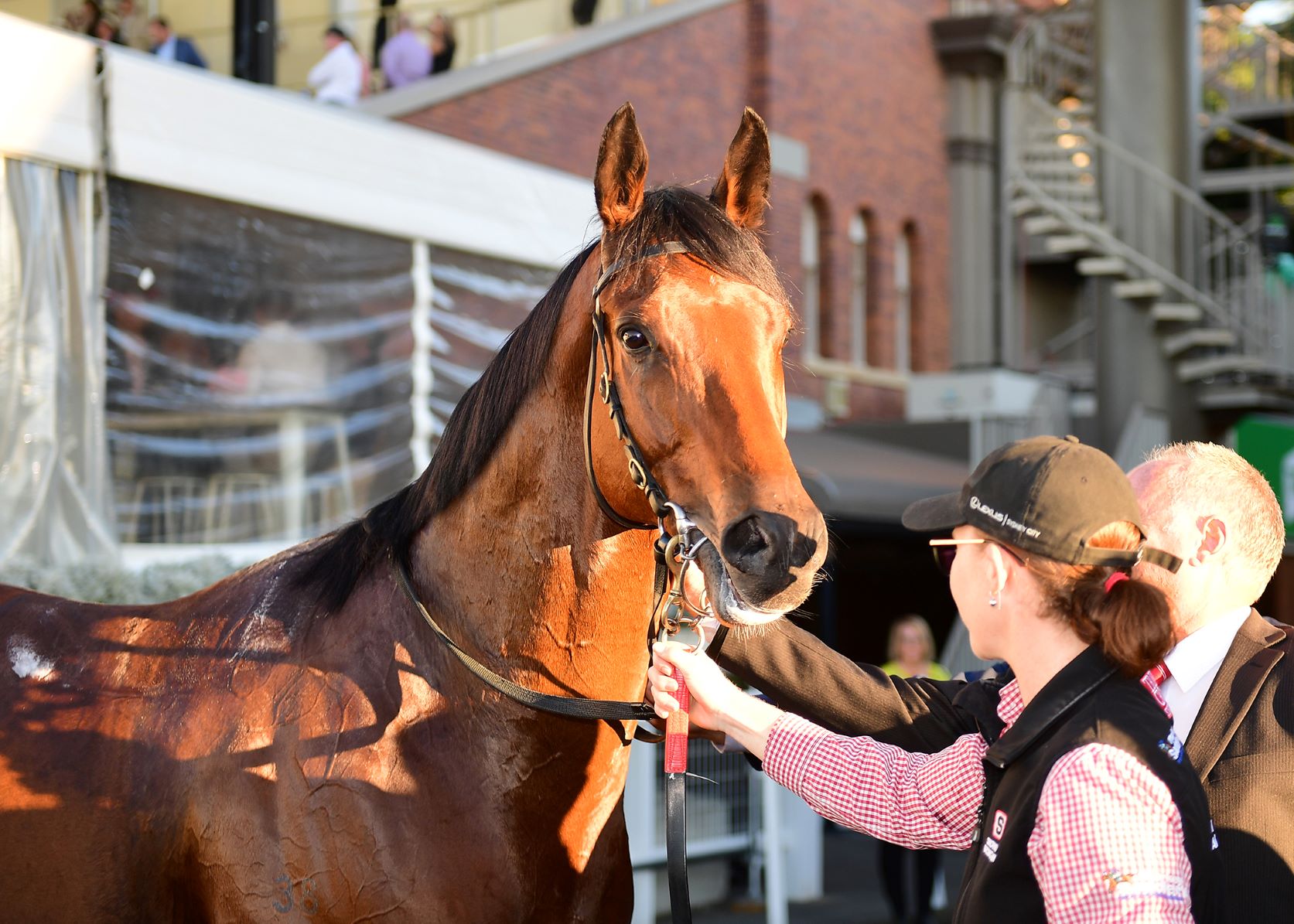 There’s every chance Michele Morley didn’t need a plane to fly back to Sydney on Sunday.

Morley had ventured to Brisbane on Saturday to watch Brave Song go around in the Group Three WJ Healy Stakes over 1200m at Eagle Farm but, 300m from home, it appeared her 4YO sprinter was going to need a fair amount of luck.

Ah, the irony. In Brave Song’s previous three starts this campaign the flashy bay had run second in the Group Three Hall Mark at Randwick – beaten a long neck after drawing barrier 10 in a field of 11; finished second at Scone in the Listed Luskin Star, three quarters of a length off the winner after jumping from the next to outside gate and; then, in the Group Two Moreton Cup at Doomben on 1 June – barrier eight in a field of eight – he missed by a lip.

In the Healy however, the gods were smiling as Brave Song drew barrier one, yet – wouldn’t you know it – he still found himself behind a wall of horses approaching the business end of the race.

Even sweeter then for Morley and her fellow owners when Brave Song powered through, taking the lead at the 100m mark and scoring with plenty in hand.

Saturday’s victory brings Brave Song’s tally to six wins and seven placings from 18 starts for $537,870 in prizemoney, with the Your Song gelding’s previous best being the Listed Ladbrokes Village Stakes last October.

“You simply can’t describe the feeling when your horse wins a race like that,” said an elated Morley. “We bought into Brave Song through Triple Crown Syndications and we’re in with a terrific bunch of owners … and I reckon about two thirds of them were there at Eagle Farm. Incredible!”

“My husband grew up around horses and he got me interested, but you have your priorities with a young family. However, with the kids all grown up, I started doing quite a bit of research into ownership,” Morley explains. “Chris and Michael (Ward) have done a fantastic job at Triple Crown and I’ve currently got four small shares in horses with them. Brave Song’s my first stakeswinner though and what a fantastic horse … he’s taken us from Sydney to Melbourne, back to Sydney, to Scone and now Brisbane. Some people can go a lifetime without a horse like this and we know how lucky we are. It’s been an amazing ride.

“I’ve always been a huge fan of (trainers) Peter and Paul Snowden too and probably even a bigger fan after Saturday. They’re really down to earth.

“A few of the other people in Brave Song live relatively close by but the thing I’ve found about Triple Crown is that even the owners in the other syndicates will ring up and wish you luck before a race.

“It’s not about the money … sure, when you get a good one it pays a few bills, but there’s no amount of money in the world that will give you a thrill like I experienced on Saturday. Highly recommended!”

Brave Song is one of three stakes winners for Widden Stud’s Group One BTC Cup winner, Your Song, and is a half brother to three winners, including another 6-time winner in Gangster’s Choice.

“It was a pretty good day at the office for Triple Crown with Smartedge winning his fourth race earlier in the Eagle Farm program,” Chris Ward enthused. “As for Brave Song, he’s got quite a few options following Saturday’s win … he’ll go out for a short break now, but will stay up at Washpool Lodge in Queensland and try and catch some of that sunshine.

“Brave Song will most likely be targeted at those new million dollar sprints in November: The Hunter at Newcastle and The Gong at Kembla.

“He’s always been an ‘eye catcher’ … a magnificent physical type and a really good mover. Basically ticks all the boxes. He’s from the first crop of Your Song and while a lot of them go early, as Brave Song did, they seem to get even better as they mature.

“Brave Song is certainly on an upward trend and I really think he can take it to the next level.”

HOOFNOTE: It was announced last week that Yulong Investments has again secured Triple Crown’s star performer, Redzel, for their ‘slot’ in this year’s $14 million The Everest.

The only horse to win the two runnings of The Everest thus far, Redzel has just recently returned to work after a mixed autumn campaign which yielded no wins but included seconds in the Group Two Challenge and Victory Stakes.

“We’re rapt with the way Redzel’s come back,” Ward adds. “He had a few niggling problems last time in which we’ve got sorted and he’s really got that old attitude back. The plan at this stage is for him to resume in the (Group Three) Concorde Stakes (over 1000m at Royal Randwick) in September.”

Redzel won the Concorde last year when resuming, then ran fifth in the Group Two Premiere later that month before going on to capture the Everest.