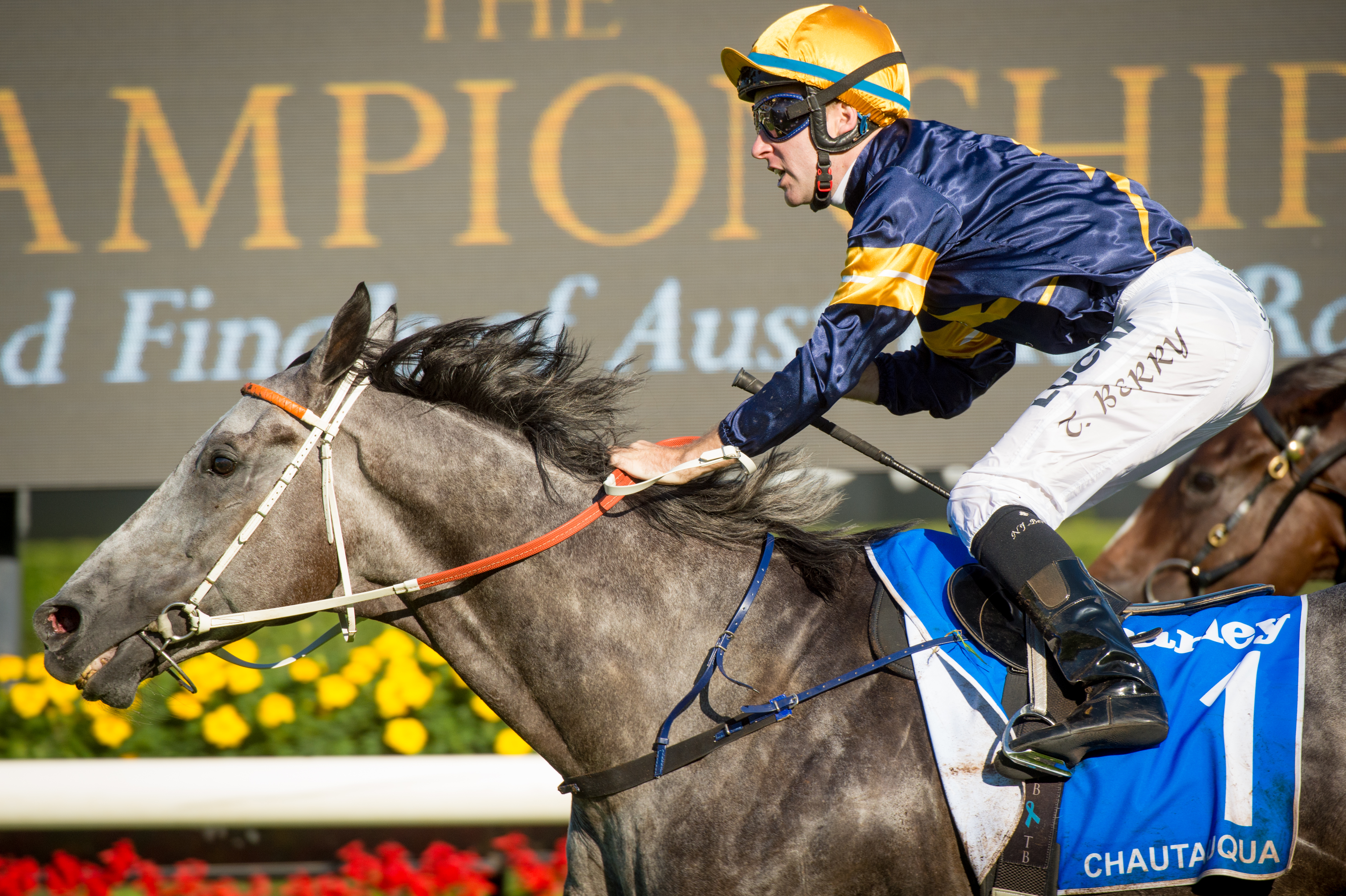 The late, great sportswriter, Red Smith, once famously opined that the only way to make the America’s Cup interesting would be to start it 100 yards upriver from Niagara Falls.

Smith was quite the horse racing tragic though and wouldn’t have had a problem with the excitement levels on the opening day of The Championships at Royal Randwick on Saturday: 10 races, four of them Group Ones, five Group Twos and Threes … with no more than a length separating first and second in the final five races.

Pretty exciting alright. A promoter’s dream. But just how do you describe the one minute and 12.44 seconds that was Chautauqua? Red Smith might have been able to. Maybe Les Carlyon.

Simply saying ‘goosebumps’ hardly covers it. This was Winx. It was Black Caviar. It was Kingston Town. And for the centenarians among us, we suggest they’d agree it was Phar Lap too.

This is not about comparing records, it’s about moments in time.

Seventy, maybe even fifty metres from home, you had to think it was going to be English’s day in the TJ Smith Stakes. The mare had already been accorded Champion Filly status as a 2YO and 3YO with victories in the All Aged and a Golden Slipper second, and another Group One appeared to be hers for the taking.

But, with the risk of straying into the biblical, Chautauqua came from the clouds to snatch his third ‘TJ’ in succession and, in the process, become the highest earning sprinter this country has ever seen ($8,369,435).

We all knew that Chautauqua was ‘capable’ of doing it … we just didn’t expect it. Many considered his better days behind him and the joke is on us because the only things behind him on Saturday were slipstream and rivals.

Chautauqua’s owner, Rupert Legh, wasn’t worried during the run. Well, not too much he reckons. He probably didn’t want his horse coming down the middle of the track and from THAT far back on a heavy surface, but he wasn’t looking for the panic button either.

“I was pretty confident at around the 50 metre mark, but it was touch and go until then,” Legh admits. “I’ve been going to the races for a long time now but I’ve never seen a horse do what he does at the end of a race.

“It was an exceptional training performance. To bring the horse back from 1500m to win over 1200m against that field … well, no wonder John Hawkes is a Hall of Famer.

“Chautauqua will get a well deserved rest now and the aim, at this stage, is to bring him back with the Everest in mind. Let’s put it this way, we’ve already booked a spot.”

In light of his effort to become the only horse to win three TJ’s when many thought the task insurmountable, few would doubt that Chautauqua is not ready to climb another mountain.

Unfortunately for Legh, he wasn’t on hand to watch Chautauqua at Royal Randwick given that he was confined to bed after recent surgery.

Yet, he’s had plenty of runners to keep him occupied with Milwaukee brewing up his first stakes success in the Listed Bendigo Guineas, just 20 minutes after the TJ Smith and, ironically … leading throughout.

Legh was also pretty pleased with the run of Tivaci who finished fourth behind Chautauqua in the TJ (“Tivaci had the second fastest sectionals”), while War Legend had little luck in the Listed Golden Mile at Bendigo, flashing home for third.

Legh’s second favourite yarn from the past week however relates to the win of his grey 3YO gelding, Tribal Wisdom, who took home the Listed Gosford Guineas on Friday.

“My surgeon came in to see me on Friday and said ‘I’m not very happy with you’. When I asked him why, he said ‘because your horse has just beaten mine in the Gosford Guineas!’.”

Legh is not about to seek out a second opinion on Chautauqua, but he might want to be a bit more careful with his doctors.

HOOFNOTE: Both Chautauqua and English are by Coolmore Australia’s now retired stallion, Encosta de Lago, and Paddy Oman, from Coolmore Australia’s Sales & Nominations was, not surprisingly, happy with the TJ result: “The Chautauqua story is a great one as he was bred on a nomination that was purchased by the Throsby family as part of the Coolmore Bushfire Appeal back in 2009.

“It’s therefore very fitting that their kind gesture would be rewarded with such an amazing horse. He is a fantastic ambassador for Encosta de Lago, as is the runner-up English.

“To their credit, they both display the same appetite for racing that the progeny of Encosta de Lago are famous for and obviously both are incredibly durable horses.

“Given that Encosta has some exciting sire sons and with the effectiveness of his daughters as producers (the first two home in the Sires’ were out of Encosta de Lago mares), his influence is going to be felt for many years to come.”