Cockram Stakes Proves To Be Ocean Of Eden 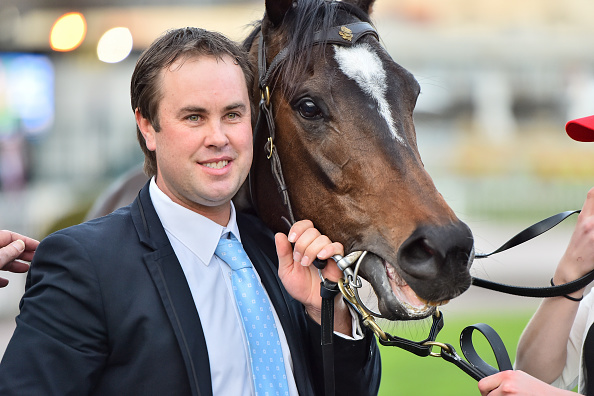 If you had to pick a winner of the ‘Feel Good Stakes’ at Caulfield on Saturday, it would be hard to go past Ocean Embers.

The mare’s trainer, Shea Eden, was quietly confident Ocean Embers would figure in the finish of the Group Three Ladbrokes Cockram Stakes, but then again she did have the widest barrier and this was a step up in class from her win at Caulfield two weeks previously.

What’s more, the young trainer had to contend with the weight of owner expectations – quite substantial when you consider the post-race celebrations – and to top it all off, it was Eden’s father’s birthday.

No wonder he sounded nervous when interviewed pre-race.

However, the only burden for Ocean Embers was 55 kilos and despite facing a sea of rumps until turning for home, jockey Dwayne Dunn charted a clear passage in the straight to score in a thriller.

It was the first stakes winner for Eden Racing and the trainer pretty much summed up how far he had come in a relatively short time: “Two years ago I trained the Mildura Cup winner on my father’s birthday and now I’ve managed to get a Group winner with this horse (Ocean Embers),” Eden enthused. “I guess this must be my lucky day!

“This is very special … Ocean Embers is only a tiny filly but she’s got an exceptional attitude. She’s had a few issues along the way but I’ll likely target the (Group Three) How Now Stakes with her in three weeks time.

“Who knows? If she gets through that OK, maybe the (Group One) Manikato Stakes.”

Offered by Cornerstone Stud at the 2014 Adelaide Magic Millions Yearling Sale, Eden purchased the filly for just $23,000 – an astute purchase to say the least, given that her record now stands at four wins and a second from seven outings and $216,150 in stakes.

Laying claim to some well credentialed, northern hemisphere relations, Ocean Embers is out of the Tabasco Cat mare, Burningwood and is a half brother to Japanese Group winner, Fireflaught.

Significantly, Ocean Embers hails from the first of only two crops by Redoute’s Choice stallion, Beneteau.

A Group winner at two before being retired to Arrowfield Stud, Beneteau was sadly euthanised after developing a neurological condition, leaving behind just 86 foals and 50 mares in foal.

Remarkably, Ocean Embers is Beneteau’s sixth individual stakes winner and 19th stakes horse overall, a figure not lost on Arrowfield’s Paul Messara: “Beneteau’s death in 2013 was a major blow for Arrowfield at the time and the 19 stakes performers he’s now left only increases our sense of loss. He’s not finished yet, either – Ocean Embers is clearly a serious talent, Weatherly is very exciting and Bacarella is progressing nicely in Gary Moore’s stable. Prompt Return, a Group winner at two in Melbourne, has also won his first two starts this campaign.

“Beneteau’s success and the rise of Snitzel and Not A Single Doubt give us a lot of confidence in our selection of Redoute’s Choice sons. Scissor Kick and Panzer Division, new to our roster this year, both have similar profiles to Beneteau: superb physiques, untapped Group One ability and strong female families.”