Cousin Ivan – The Short And Long Of It 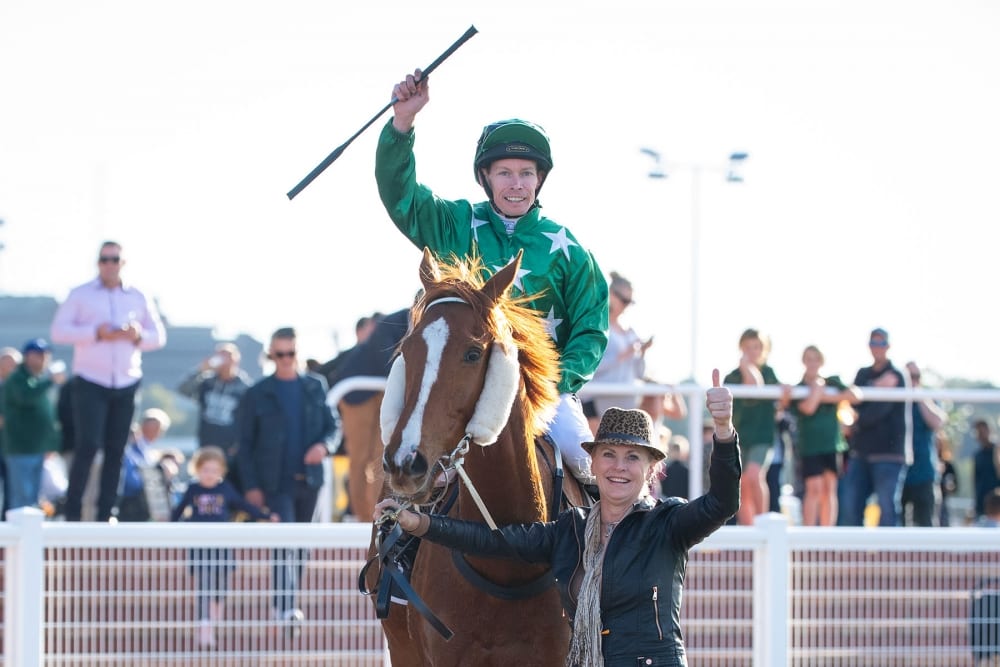 There’s a lot of history surrounding the coastal city of Albany.

Once famous for its whaling, Albany is the oldest colonial settlement in Western Australia and sits some 400 kilometres from Perth.

In 1914 it was the last port of call for troops heading off to fight in World War 1.

On Saturday at Belmont Park, it was Albany’s own – the 3YO chestnut, Cousin Ivan – who managed to land a whale by capturing the Listed Aquanita Stakes over 2000m: showing plenty of fight along the way.

Firming from $20 to $14, Cousin Ivan wasn’t expected to trouble the hot favourite, Uncle Dick, but after hitting the front with 200m to go, the Fiorente chestnut refused to cave … much to the delight of breeder, Grant Gibbs, and an understandably emotional trainer, Holly Taylor.

This was not only the first stakes winner for Taylor – who turned 30 last week – but her first city winner to boot.

“I took out my trainers’ licence two years ago and currently have eight in work at Forrestdale (30 minutes drive from Belmont Park),” Taylor points out. “Cousin Ivan won at Belmont on debut – at the end of May – but that was actually classed as a provincial meeting after being transferred from Northam due to coronavirus.

“That was Cousin Ivan’s fourth run on Saturday and to win a black type with him is just a huge thrill. Amazing.”

Although Cousin Ivan only ‘officially’ joined the stable at the start of his current prep, both Taylor and the Fiorente galloper have a history.

“Cousin Ivan was bred by Grant Gibbs and his partner, Annette Crump and they’re based at Albany,” Taylor explains. “I spent a bit of time down there when the horse was having his early education and then they contacted me about taking the horse for a short prep last year.

“He went back to Albany and I thought that was that, but then they phoned me in May about taking Cousin Ivan on full-time. It couldn’t have worked out better!”

While the journey has barely started for Taylor, the road for Gibbs – conversely – has been fairly lengthy: ever since he started out as an apprentice jockey in New Zealand, “the day after I turned 14”.

“I was a jockey in New Zealand for around eight years before shifting to WA in my early 20s,” Gibbs reveals. “I rode quite a few winners in the bush and also won the 1988 Bunbury Cup on Muromoon, who ran third in the Perth Cup too.

“I gave riding away at 43 due to arthritis, which resulted in a double hip replacement, but I still manage to ride trackwork.

“My wife is a licenced trainer but we’ve scaled right back and these days we only race what we breed.”

Gibbs’s actual journey getting to Cousin Ivan has had some winds and turns too.

“I was sitting in a pub one day back in the 1990s and chatting to a bloke who asked me if I remembered a horse called Spring Moss, who was a Group winner of 13 races in New Zealand,” Gibbs recalls. “Long story short, he said he had the full sister (Miss Trapani) and I could buy her for $500.

“Miss Trapani produced Waxed Lyrical for me, who didn’t race due to a bowed tendon, but Waxed Lyrical’s second foal was Chong Nonsi, who won six of her first nine starts. Chong Nonsi’s first runner is Cousin Ivan.

“You’ve got to be patient in this game.”

Interestingly, Belmont Park’s two stakes races on Saturday – both over 2000m – were won by Victorian based stallions: Cousin Ivan becomes the fifth stakes winner for Sun Stud’s Fiorente, while the exciting, unbeaten 3YO filly, Chantrea took her tally to five from five in the Belmont Oaks and is by Swettenham Stud’s Puissance de Lune.

Although winner of the Australian Cup and Group One placed over 1400m, Fiorente is best remembered as winner of the Melbourne Cup, while Puissance de Lune would win eight from 1400m to 2600m, including the Group Three Queen Elizabeth, and was regarded one of the best stayers of his generation.

“You’ll note with both Cousin Ivan and Chantrea that they weren’t pushed early and it’s paying dividends now,” Gibbs adds. “Cousin Ivan is getting tipped out for a few months and we’ll bring him back for the Cups circuit in the south west … he could be our retirement fund.

“All things being equal I’d like to give him a shot of winning the Perth Cup as a 5YO … who knows, I might just win a Perth Cup yet!”

HOOFNOTE: Cousin Ivan is not only the toast of Albany but has something of a fan base in Walpole, some 120 kilometres west.

“My partner in the horse is Darren White and he named him after his actual cousin, Ivan, who is local hairdresser in Walpole and something of a legend around town,” Gibbs reveals. “We’re sticking with the theme though because Cousin Ivan’s full brother – an unraced 2YO – has the stable name, Boris.”