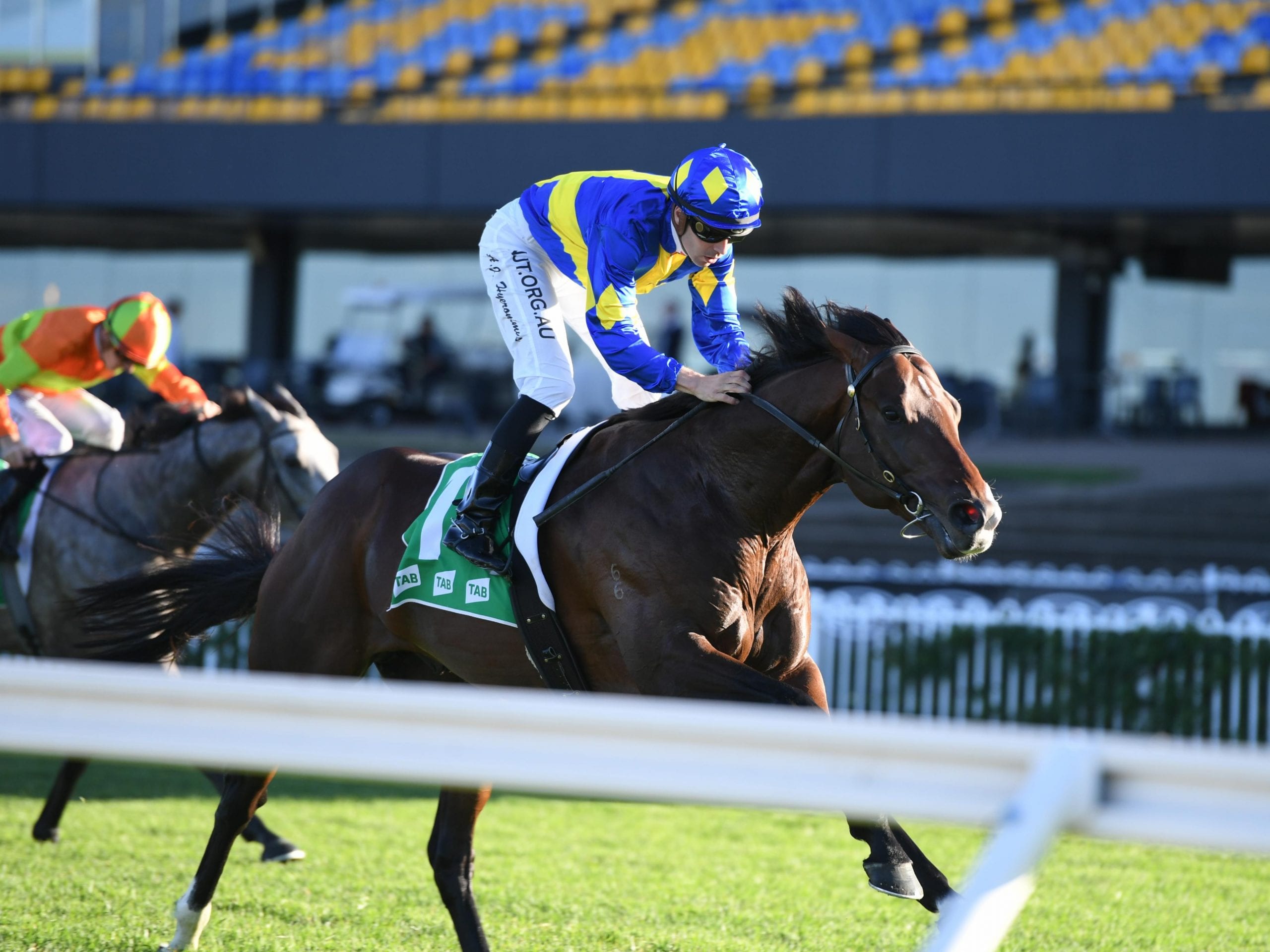 Cairns based businessman, Darren Halpin, could be excused a bout of the ‘yips’ as he sat down to watch Saturday’s Group Three Blacktown Workers Hawkesbury Guineas over 1400m at Rosehill Gardens.

Halpin is a part-owner of 3YO colt, Dawn Passage, who won impressively on debut as a juvenile and, upon resuming in the spring, the Listed Rosebud Stakes, but has had a run of outs ever since. His start prior to the Hawkesbury Guineas saw Dawn Passage finish 8th of 10 in the Group Two Arrowfield Sprint.

“I reckon the colt has a ton of ability and his record could easily read a lot better than it does,” Halpin points out. “He tends to get way back in races and really hasn’t had that much luck in running.”

All the ‘luck’ was on Dawn Passage’s side on Saturday though with the Gai Waterhouse and Adrian Bott colt unleashing a withering burst over the final 400m to score with nearly three lengths to spare.

3YO colt Dawn Passage trained by the @GaiWaterhouse1 -Bott stable looks to have a bright future.

Dawn Passage has now raced on eight occasions – seven at stakes level – for three wins and two placings, yielding close to $500,000 in stakes.

“I have to confess I was more hopeful than confident about his chances because I had four runners at the Gold Coast on Friday – three of them favourite – and they all finished second,” Halpin says with a laugh. “It was hardly a confidence booster heading into a Group race, but Dawn Passage certainly got the job done in fine style in near record time.”

Racing horses for around 30 years and with 24 gallopers in work at stables in Queensland, NSW and Victoria, Halpin also part-owned Magic Millions 2YO Classic and 3-time stakes winner, Houtzen. A self confessed ‘racing tragic’, Halpin is a founding shareholder of miRunners too, the fledgling ownership group with over 5,000 owners across 13 horses whose runners include multiple winning 2YO, Dusty Tycoon.

“I love my racing. Coronavirus has affected so many people but thank god racing has continued,” Halpin adds. “After all, how else would you differentiate between Friday and Monday?”

Halpin believes Dawn Approach is next likely to target the $200,000 Inglis 3YO Guineas over 1400m at Rosehill Gardens on 16 May, but is unsure as to where the colt will head after that.

“A tilt at the Brisbane winter carnival is up in the air, but looking ahead to a spring campaign, I wouldn’t think a race like the ($7.5 million) Golden Eagle at Rosehill in October is out of his reach,” Halpin reckons.

Dawn Passage is among 11 stakes winners for the Group One English Two Guineas winner, Dawn Approach – who stood at Emirates Park for five seasons and is also the sire of 2019 black type winners Diamond Thunder and Tahitian Dancer.

Meanwhile, Dawn Passage is out of the immensely prolific Group winning 2YO, Raja Lane who has had seven to race for seven winners.

Aside from Dawn Passage, Raja Lane has also produced a Group winning 2YO in Dinkum Diamond, in turn the dam of Group winner and million dollar earner, Graff, along with Rick Worthington’s stakes placed, Steel Diamond.

“Dawn Passage really caught our eye at the sale,” Blaxland explains. “Nice, neat colt – well quartered – with the temperament of a 5YO gelding.

“We purchased a lot of nice yearlings in 2018, which include (2YO stakes winners) Unite and Conquer and Bellevue Hill, and I reckon this bloke (Dawn Passage) is a serious horse who just hasn’t had much luck.

“Hopefully Saturday has turned that all around. Apart from Darren, who is my accountant, and his wife, Noelle, some other good friends in Dave and Susan Healey race Dawn Passage too. Dave and Susan have had a lot of good runners with Gai including (Golden Slipper winner and sire) Vancouver.”

One of the nation’s most successful farms for the past three decades, Mill Park’s stakes winning graduates in the past 12 months have included Group One Victoria Derby winner, Warning, Danny O’Brien’s Flemington stakes winner, Banquo, Adelaide Guineas winner So We Are and Magic Millions 2YO Classic, multiple Group winner and Golden Slipper runnerup, Away Game, along with South African stakes winners Run Fox Run and Crown Towers.

“Ecumenical was sold for just $14,000 at last year’s Adelaide Magic Millions, while Dawn Passage and Dalasan ($80,000) were both in the same draft at the 2018 Inglis Melbourne Premier Yearling Sale,” Watson explains. “It was a great day for such terrific supporters as Harry Perks (Toorak Thoroughbred Breeding) who bred both Dawn Passage and Dalasan, but a particularly great day for South Australian breeding as each of the three was raised and prepared on farm.”

Usually offering 30-35 yearlings annually, Mill Park will have drafts for Round 2 of the Australian Easter Yearling Sale and Magic Millions Gold Coast National Yearling Sale – both set down for July – while the farm also has multiple Group winner Arabian Gold (in foal to I Am Invincible) and Ravenous Lass (in foal to Zoustar) catalogued for next week’s Chairman’s Sale and Broodmare Sale respectively.

“Both Arabian Gold and Ravenous Lass are based at Sledmere Stud in NSW to assist with any inspections and we’re really looking forward to both the Chairman’s and Broodmare Sale … particularly with Ravenous Lass as she’s the dam of Group Two winner San Nicasio and is carrying a full relation to Zoushine, who was only beaten a neck earlier this month when second to Ecumenical in the Listed Dequetteville Stakes,” Watson adds.