Derby Prize Is Another Family Icon 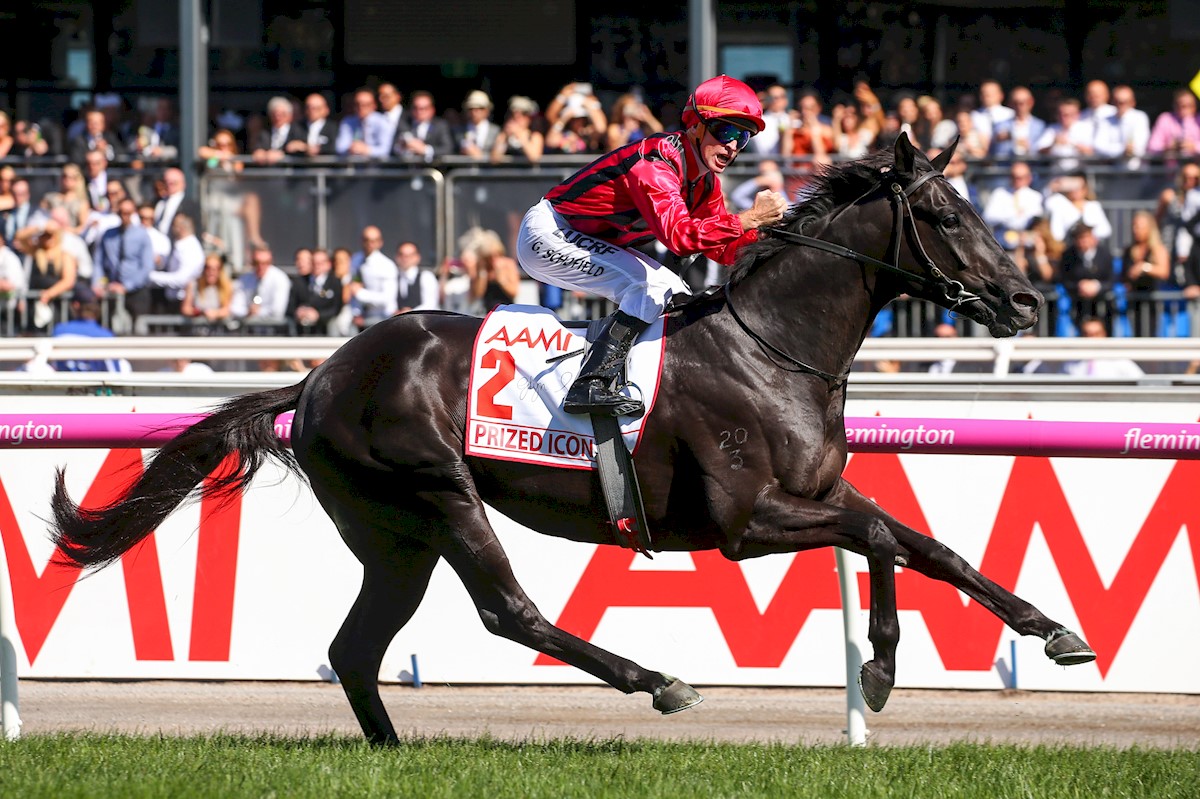 There would be a lot of photos taken of Bart Cummings over the years. Millions probably.

Great shock of hair, happy smile and, as Les Carlyon, so aptly put it, ‘eyebrows that appear to be climbing in search of a trellis’.

But there’s one of him long before he became famous: an old black and white of him sitting on a fence feeding hay to a horse called Comic Court.

At that time, Cummings was strapping Comic Court for his father Jim and proudly looked on as the stallion won 23 ‘principal’ races, including the 1950 Melbourne Cup.

Two years before that though, Comic Court won the Victoria Derby … Jim Cummings’ only  victory in the race, but setting in train a dynastic ‘hold’ that is probably unequalled in a major race anywhere in the world.

After all, Bart would win five Victoria Derbies in his own right, son Anthony won in 2012 with Fiveandahalfstar and, now, namesake of the original, James Cummings has won it with his first runner in the race.

Certainly the name of the 2016 winner – Prized Icon – is fitting for what is one of Australian racing’s most famous ‘brands’.

Sure, James Cummings has been part of stable life since day dot and, enhanced by a two year training partnership with his grandfather from 2013, has clearly learned the lessons well.

That said, some things can’t be taught, and Cummings showed a grace and style beyond his years after the Derby and was quick to point to the advice he had taken from veteran jockey, Glyn Schofield, who convinced the trainer to back up Prized Icon after a disappointing fifth in the Group Two LUCRF Super Vase at Moonee Valley the previous Saturday.

Consequently, they offered $17 about Prized Icon’s chances before the Derby and while he carried little of punters’ expectations, the historic moment wasn’t lost on the huge crowd. It doesn’t take a statue of Bart Cummings at Flemington to keep the memories alive – especially at this time of year.

(Ironically, Prized Icon had won the Fernhill Handicap just seven days prior to his other Group One success in the Champagne Stakes, as a 2YO, back in April).

Prized Icon’s Derby victory was a family affair in more ways than one … or four. Cummings’ wife, Monica, is the granddaughter of Eduardo Cojuangco who has been a major presence in Australian racing and breeding for several decades and whose Gooree Park foaled, raised and races Prized Icon.

The decision by underbidders to not up the ante has proven costly with the colt’s earnings now hovering at the $1.5 million mark after the Derby and, in light of his breeding, several million more as a breeding prospect.

After all, Gooree’s homebreds certainly appear to have a penchant for stud careers with recent examples including the ill-fated Northern Meteor, Smart Missile (Arrowfield), Your Song (Widden) and Hallowed Crown (Darley).

“That was a tremendous result on Saturday … not just for James but for the entire operation,” Monica Cummings enthused. “There is a heavy burden that goes with the Cummings name but I believe that the Derby win of Prized Icon has gone a long way to gaining James recognition in his own right.

“I know that my grandfather was very pleased with not only the way that Prized Icon won, but especially with the way he looked on the day.

“That was a very strong field in the Derby and, while it might sound cliched, in terms of history it was quite another thing.

“Our respective teams (Gooree & James Cummings Racing) are only relatively small but it all works very well together and we’re fortunate enough to be getting the results on the track … and in the breeding barn.”

“Gooree itself is only a boutique operation and we don’t operate with huge numbers, but we’re very proud of our success, particularly with colts, and believe Gooree’s record for producing stallions would be difficult to beat.

“Naturally enough, there has been a lot of interest in Prized Icon in terms of standing him at stud I’m confident he will continue to improve over the next 12 months.

“He (Prized Icon) has earned a well deserved break and we’ll re-evaluate over the next couple of weeks as to what and where his next campaign will be.”

One thing is for sure: James Cummings might have four Victoria Derbies to go and a lot more photos, but Saturday was a very good start.

Prized Icon Is More Than Ready

While it might have been a first for James Cummings, Prized Icon’s sire, More Than Ready, has now produced two Victoria Derby winners, having been represented by Benicio in 2005 (who, coincidentally, was from More Than Ready’s first Australian crop).

More Than Ready is currently working his way through another bumper book of mares at Vinery Stud in the Hunter Valley and, according to Nominations & Sales Manager, Adam White, the gloss doesn’t appear to be about to fade anytime soon.

“This season More Than Ready broke the record for consecutive shuttle seasons, 16 in total,” White points out. “No other horse has done more. This is a testament to how successful and popular the horse has been in both hemispheres. It didn’t take long for his book to fill up this year after announcing his fee ($66,000).

“His record at stud is phenomenal … More Than Ready has now had 164 stakes winners world wide and Prized Icon is one of 19 individual Group One winners.

“We all know how good a sire of two-year-olds he is, having been the only stallion to become a Champion Juvenile sire both in Australia and the USA.

“But in 2016 he has shown just how versatile he is by producing the Queensland Derby and now Victorian Derby winners. Just incredible.

“He’s pretty popular in other regions as well and, after Prized Icon’s Derby win, he backed up in South Africa on Saturday night with Ektifaa taking out a Group Two over 1400m at Kenilworth.”

HOOFNOTE: The success of Australian-bred gallopers in South Africa’s feature races continued at Kenilworth on Sunday with the Group Two Choice Carriers Championship and Group Three Cape Classic – both over 1400m – added to the honour roll.

It was the first black type victory for More Than Ready 3YO, Ektifaa who proved too strong in the Choice Carriers Championship and has now won the last three in succession from just six starts.

Out of the Redoute’s Choice mare, Stellar Vinia, and closely related to English Wonder, Ektifaa was sold by Segenhoe Stud to Shadwell Australia for $600,000 at the 2015 Inglis Easter Yearling Sale.

Trained by Joey Ramsden and sold for $120,000 at the 2015 Inglis Melbourne Premier Yearling Sale, Table Bay has now won two Group races from his six starts.