Despatch Has The Write Stuff 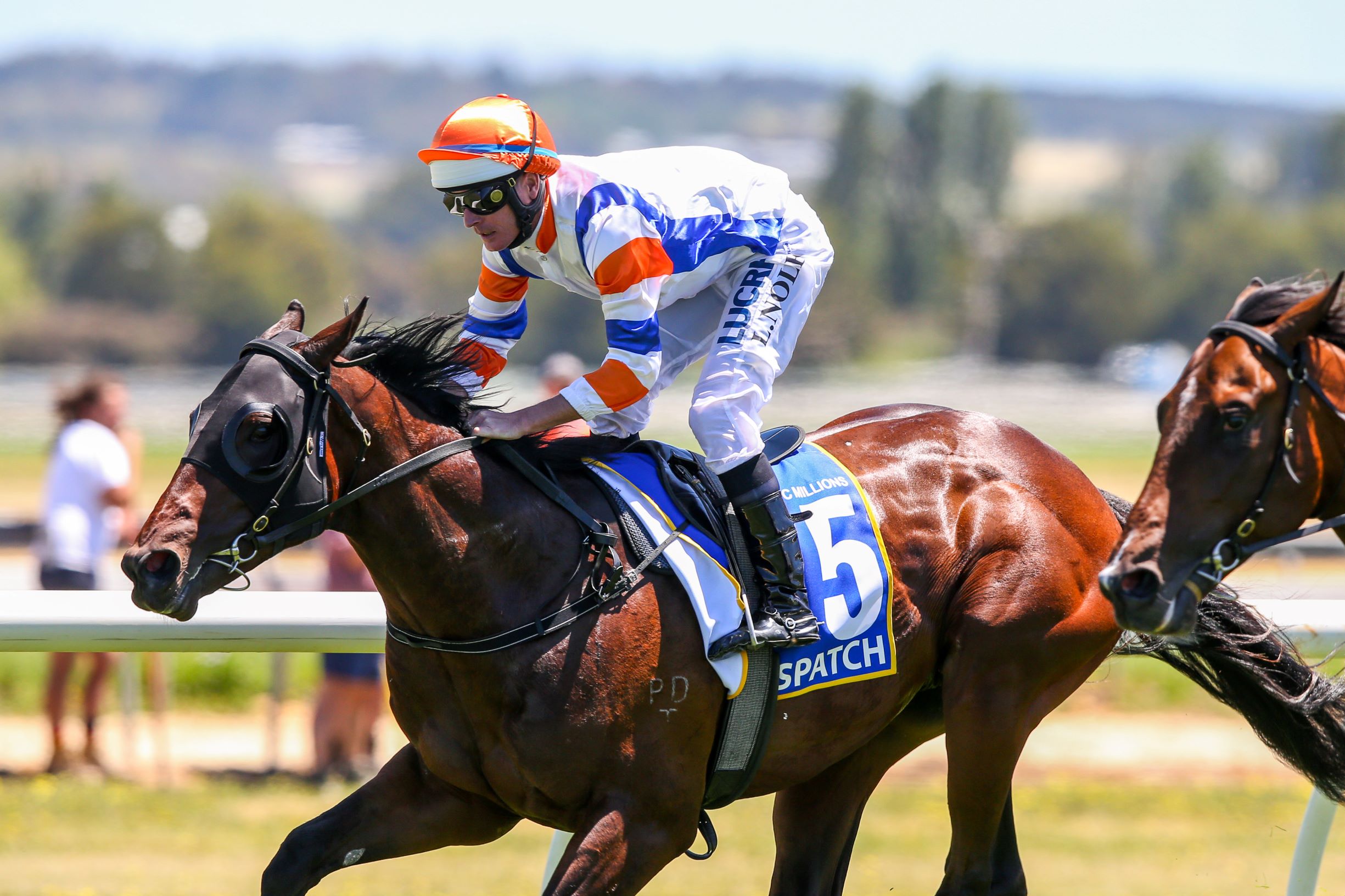 The biggest question before Saturday’s Listed TAB Oakbank Stakes was just how smoothly – if at all! – the Tony McEvoy-trained, Despatch, would despatch from the barriers.

The 4YO flyer has been something of a problem child for the stable, having been a late scratching on multiple occasions due to his ‘fractious’ behaviour.

What’s more, Despatch was on the sidelines for 15 months after commencing his career with a victory in the Ballarat Magic Millions 2YO Classic before injuring himself at his next start when third in the Listed Phelan Ready Stakes at Doomben.

Still, when a horse wins five from nine starts, including two at stakes level, and $375,960 in stakes, he’s worth persisting with.

This time around, kitted with a blindfold which was removed just as the gates opened, Despatch produced a power packed performance to score convincingly on the historic Oakbank program and will likely be targeted at the Group Three DC McKay Stakes over 1100m at Morphettville on 4 May and, who knows, maybe even a crack at the $750,000 Group One Goodwood a fortnight later.

Front and centre at Oakbank, and not just a little bit nervous, was Despatch’s part-owner, Graham Fischer: a long-time veteran of the industry but relatively new to the ownership caper.

A racing journalist for many years at the Adelaide News and later editor of TABForm, Fischer currently contributes to the McEvoy/Mitchell website and was somewhat relieved writing up Despatch’s win on Saturday night.

“Back in the day, I actually owned greyhounds and raced a very good dog called Ascapella Miss, who equalled the legendary, Zoom Top, for number of consecutive wins at (Sydney’s) Harold Park,” Fischer recalls. “I remember thinking to myself that I’m never going to do any better than that, so I resisted the urge to take a share in a racehorse for a long time.

“Because of the association with Tony (McEvoy), he kept saying he’ll get me into a horse and eventually I folded, taking a share in a tried horse, Prince of Capers.

“He won his first race for me – at Oakbank ironically – and then won races at Morphettville Parks, Caulfield and Flemington – all in the space of four months. If that doesn’t get you in, nothing will, and he’s still my favourite.

“The next horse was Grand Armada who won for me as well and then there was a multiple winner, Lucky Lucky Lucky.

“After Despatch’s 2YO campaign, Tony rang me and said there was a share going, so I climbed on board. Pretty lucky ‘streak’ that’s for sure, but all credit goes to Tony for selecting them.

“Also, I need to thank Tony’s business partner, Wayne Mitchell, who lets me sneak into the ownership through his share in the horses.”

Four horses, four winners and the latest is a dual stakes winner … yep, we’d consider that pretty lucky too!

Bred in Victoria by Paul Dillon, Despatch is among 28 stakes winners for Woodside Park Stud’s Written Tycoon and is out of the Fasliyev mare, Zoccoletta, a daughter of multiple stakes winning 2YO, Vita.

And if ever there was a poster boy for ‘pinhooking’ it’s Despatch!

The manager of Baramul Stud for the past 21 years, Paul Thompson had considered Despatch a good get when he snapped up the youngster on the Gold Coast, but didn’t reckon he would pull that kind of return just nine months later.

“I was pinhooking a couple each year around that time and was doing my best to identify types by up and coming stallions,” Thompson reveals. “Written Tycoon was just starting to hit his straps and while I definitely thought he was a stallion on the rise, if you’d told me he would be standing for $110,000 just four years later, I would have thought you had rocks in your head.”

While Despatch proved to be a great result for the Thompsons, their mother lode came a year later when they purchased an I Am Invincible weanling for $55,000 before selling said filly for $260,000 at the 2017 Gold Coast Magic Millions Yearling Sale, some six months down the track.

“Baramul is my first priority but (owner) Gerry (Harvey) wasn’t selling many weanlings at the time and I had the opportunity to have a decent look around at what was on offer,” Thompson adds. “I thought the I Am Invincible filly was particularly good value and, straight after she was sold, Brett Howard came up to me and said he really liked the filly too and would I be interested in selling half, which I did.

“If I was a great judge I would have kept the whole lot myself,” Thompson says with a laugh.