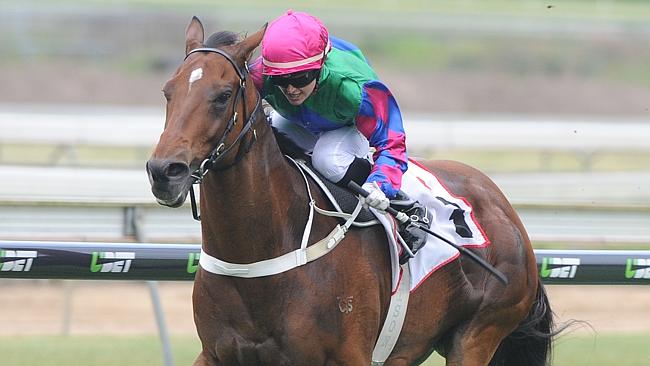 Recording his tenth race victory and first at black type level, the Tony Gollan-trained Didntcostalot will now be aimed towards the $1 million Magic Millions Sprint at the Gold Coast in January after the $3000 yearling purchase claimed the Group 3 George Moore Stakes (1200m).

One of five runners for the Gollan stable in Saturday’s Doomben feature sprint, race favourite Didntcostalot led home a stable 1-2-3 in the race for Brisbane’s 2014/15 Metropolitan leading trainer.

Jump, lead and run, they’re pretty much the race day tactics for Didntcostalot and with ten wins from 36 starts and over $500,000 in earnings, who’s to argue that these are the wrong tactics.

Certainly not jockey Tegan Harrison, who had to make the decision between riding Spirit Of Boom who had supplied the jockey with her first Group 1 success during the Brisbane Winter carnival, or stick with speedster Didntcostalot, who she had ridden three times in his last five starts.

Originally based with Marc Conners in NSW, Didntcostalot was transferred north to the stable of Gollan in August and since then has now raced on six occasions for four wins, all with Harrison aboard.

Recording the third quickest time ever run in the race behind Champion Takeover Target’s track record of 1:7.88, suggests that Didntcostalot’s performance to win by three and a half lengths had plenty of merit.

The performance will now see the son of Danerich head towards the Magic Millions $10m race day in January where he will target the $1 million Magic Millions Sprint (1100m).

The aptly named Didntcostalot was purchased from the draft of Eldon Park Stud at the 2010 Magic Millions National Yearling Sale for only $3,000.

Bred by J D Ritchie & Partners, the seven-year-old is the second foal out of the Encosta de Lago mare Costi, herself a half-sister to the Listed Malaysian Selangor Cup winner Southern Rock (Magic Wish (Mal)).

The current two-year-old out of the mare, the first foal by Danerich since Didntcostalot, is named You Wan Sum and is in the stable of Cranbourne-based trainer Darryl Horner, while Cosi has a yearling colt by Elusive Quality’s Cardinal Virtue and foaled a colt in September by Bianconi.