Princeton’s Divine Mare Is Of The Highest Quality 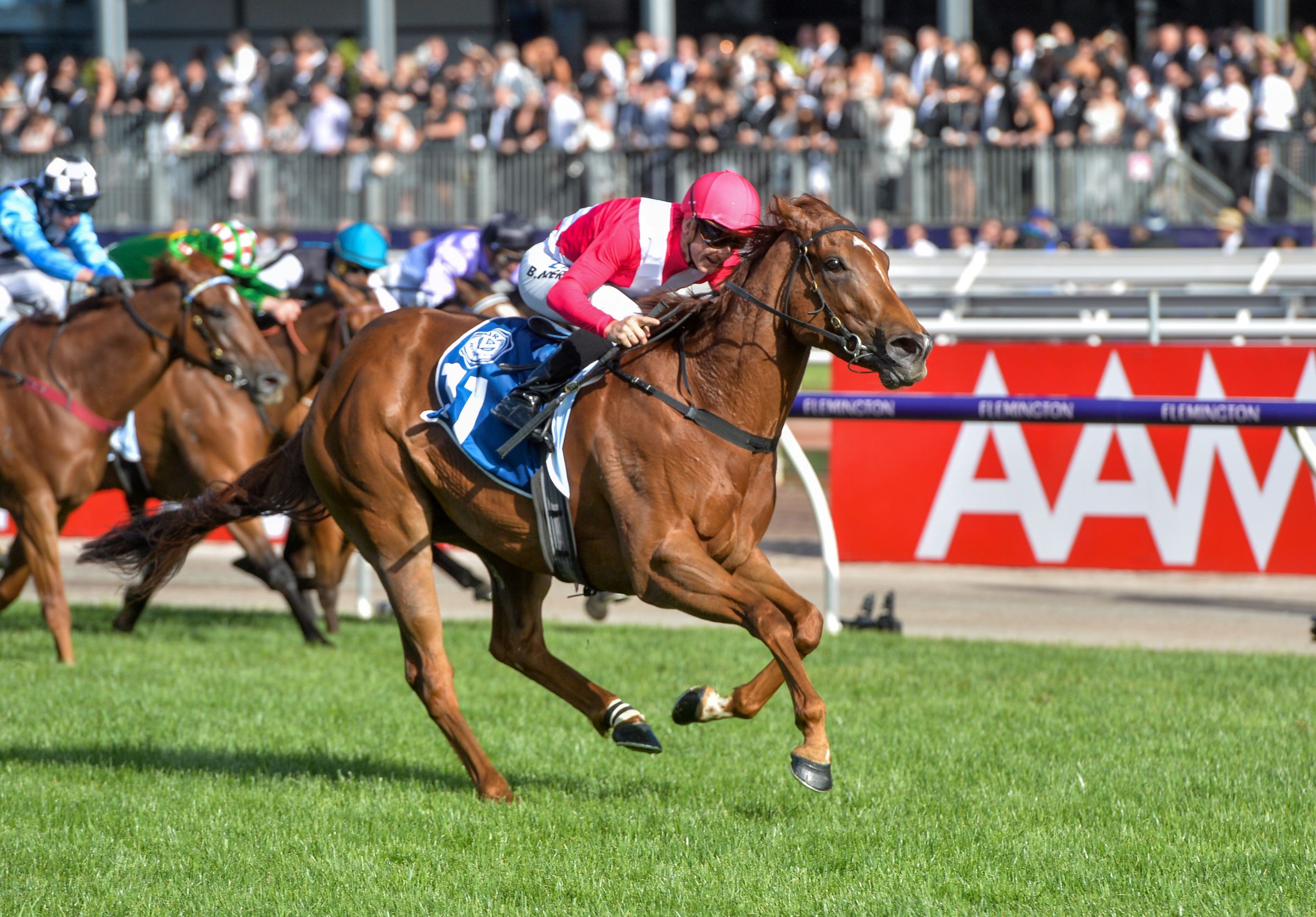 Horse racing can have its share of disappointments, but then again, it sure knows how to turn a frown upside down.

Princeton Stud’s Craig and Kath Pearce were entitled to be exasperated, miffed even, when their homebred colt, Alessandro, didn’t make the final cut for the $2 million AAMI Victoria Derby at Flemington on Saturday after ending up first emergency.

It was even more frustrating watching the race, given that the Derby was run in a manner which would have ideally suited their Fiorente youngster.

So, it was with considerable delight that the pair cheered on as their 5YO, Divine Quality, lived right up to her name by capturing the lucky last on the Derby Day program – the 1100m Group Three Furphy Sprint down the Flemington straight.

It was the first black type win (and fourth overall) for the Robbie Griffiths trained mare, although Divine Quality was a length second to First Among Equals in the Listed Straight Six at Flemington in May.

Winning a race down the Flemington straight has added meaning for the Pearces as 2016 Group One Newmarket Handicap hero, The Quarterback, also provided both Princeton Stud and Griffiths with their biggest winner to date.

“Getting a winner on any day is terrific, but to win one on Derby Day is really special,” Craig Pearce points out. “She (Divine Quality) has had her issues with maturity and intermittent problems with her feet across her career, hence why she’s a 5YO and only had the 14 starts.

“She runs very well fresh though and in fact has won three of her four first up runs.

“We’d targeted this race (Furphy Sprint) over two months ago and it all came together on the day. No firm plans have been set but we’ll likely keep her fresh and maybe run in the (Group Three) Standish at Flemington in January and the (Group One) Robert Sangster next May.”

Bred by Uluru Stud, Divine Quality hails from the first crop of Darley’s Golden Slipper (and Coolmore Stud Stakes) winner, Sepoy, and is out of the winning Fastnet Rock mare, Nun Faster: in turn a half sister to Melbourne stakes winner Vatican and closely related to New Zealand Horse of the Year, King’s Chapel.

“We had looked at quite a few Sepoys and they were out of our price range, but we saw her (Divine Quality) at the (2015) Gold Coast Magic Millions Yearling Sale and managed to pick her up for a reasonable price ($185,000),” Pearce reveals. “I thought she’d end up more of a 3YO and likely to run over a mile, but while she could get to 1400m, she’s really better suited to the shorter courses. And, as it turned out, she didn’t race until she was an April 3YO but did show a lot of talent early.”

Princeton Stud, a 55 acre property at Moorooduc in Victoria, commenced operations in 2007 and currently plays host to 12 mares, while the Pearce’s also have 10 racehorses in work.

The majority of the runners are with Griffiths but Princeton – with its distinctive racing colours of hot pink and white crossed sashes – also has the Lindsay Park trained 2YO filly, Judgement, who debuted in the Inglis Banner at Moonee Valley on 27 October and 3YO filly, Bubbles’n’troubles with Chris Waller in Sydney.

“We’ve had a handful of stakes winners in recent years with The Quarterback being the best of them so far, but I’ve always felt that Divine Quality is Group One quality and hopefully she’ll prove it in the next 12 months,” Pearce adds. “As for the breeding side, we’ve got a dozen babies on the ground and there will be about seven or eight yearlings heading to sales in 2019,” Pearce reveals. “One of our mares is Divine Quality’s mum, Nun Faster which we picked up for $180,000 at last year’s Magic Millions National Broodmare Sale.

“Divine Quality had won two of her three starts by the time we got Nun Faster and she recently produced a Written Tycoon filly and will be covered by Real Impact this spring.”