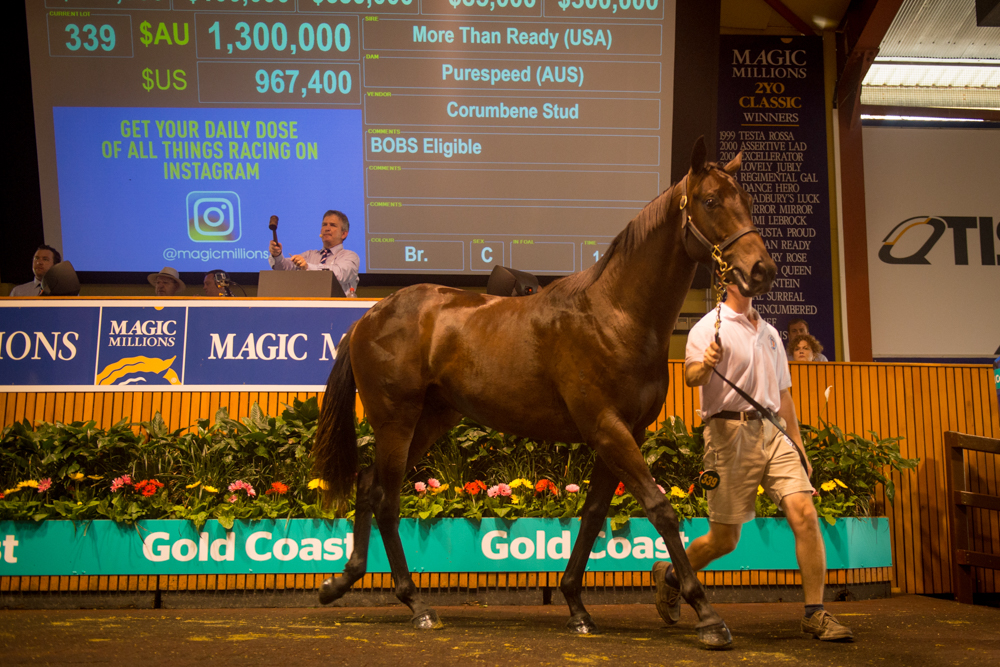 A yearling sale can’t be defined by numbers alone.

However, if #MagicMillions17 is to be remembered for anything, it would be atmosphere. A warm sense of the health and wealth of Australia’s thoroughbred industry.

The Magic Millions week (two weeks if you want to throw in inspections) is an ‘event’ in every sense of the word: barrier draws on the beach, polo, gala launches, a $10 million race day and, just for good measure, a yearling sale that is now a ‘must attend’ for buyers from all over the globe.

Ultimately, there were 649 yearlings sold in Book One – which ran from Wednesday to Saturday – with buyers representing 12 countries and every state of Australia: Hong Kong spent $11 million, China $3.8 million, USA $2.2 million, United Kingdom nearly $2 million … even New Caledonia chipped in.

Vendors, in the main, were satisfied with what they took away from the four days of Book One, or more specifically, with what they didn’t have to take home (the clearance is currently 87% and rising).

Perhaps the happiest marriage of all though was that of vendor/buyer, Aquis Farm, which purchased a More Than Ready colt for $1.3 million and sold a Medaglia d’Oro colt for $1 million.

While Aquis Farm eventually came away with several purchases, Aquis Head of Sales, Jonathan Crowley, was arguably prouder of his farm’s performance behind the auctioneer’s stand.

“We’re only a relatively young operation and this (the 2017 Gold Coast Magic Millions) was our first significant offering as a vendor,” Crowley points out. “We brought down 23 yearlings to the Gold Coast – sold one for seven figures, another for $525,000 and ultimately sold every one of them.

“We’ve got a terrific team of people at Aquis and to have a 100% clearance says a lot for both the quality of the horses and for the work that staff have put in.

“And full marks to Magic Millions: they definitely managed to get all the right buyers here for the sale.

“There was a lot of competition out there, as we found out when we had to go to $1.3 million for the More Than Ready colt. He might eventually race in Hong Kong but for the moment he’ll race in Australia as it’s such a commercially appealing pedigree.”

Luskin Park Stud principal, Paul Whelan, departs the Gold Coast as one happy camper too given that his was the leading draft by average – selling six of seven for a gross of $2.6 millions and average of $435,000.

“I got a nice surprise on the Sunday evening when David Chester (Magic Millions Sales Director) came up and told me the news,” Whelan explains.

“We’re only a boutique stud and much of the focus this time around has been centred on the Magic Millions and we knew that we had some very good horses to offer. All of them well bred and real athletes. So, we were fairly confident of having a good sale but had even higher expectations when you saw all the prospective buyers walking around the complex.

“Luskin Park started parading on the Friday and it was just so busy. Ultimately, the Snitzel colt we sold for $925,000 to the China Horse Club, Winstar and Newgate was inspected on 152 individual occasions.

“There was such a great feeling about this sale. After it was announced that we’d topped the averages, there were so many other vendors that came up and congratulated us. A real sense of camaraderie.

“Magic Millions did a great job and I believe with the sale, the $10 million race day and all the other events, it typifies the strength of racing and breeding in Australia.”