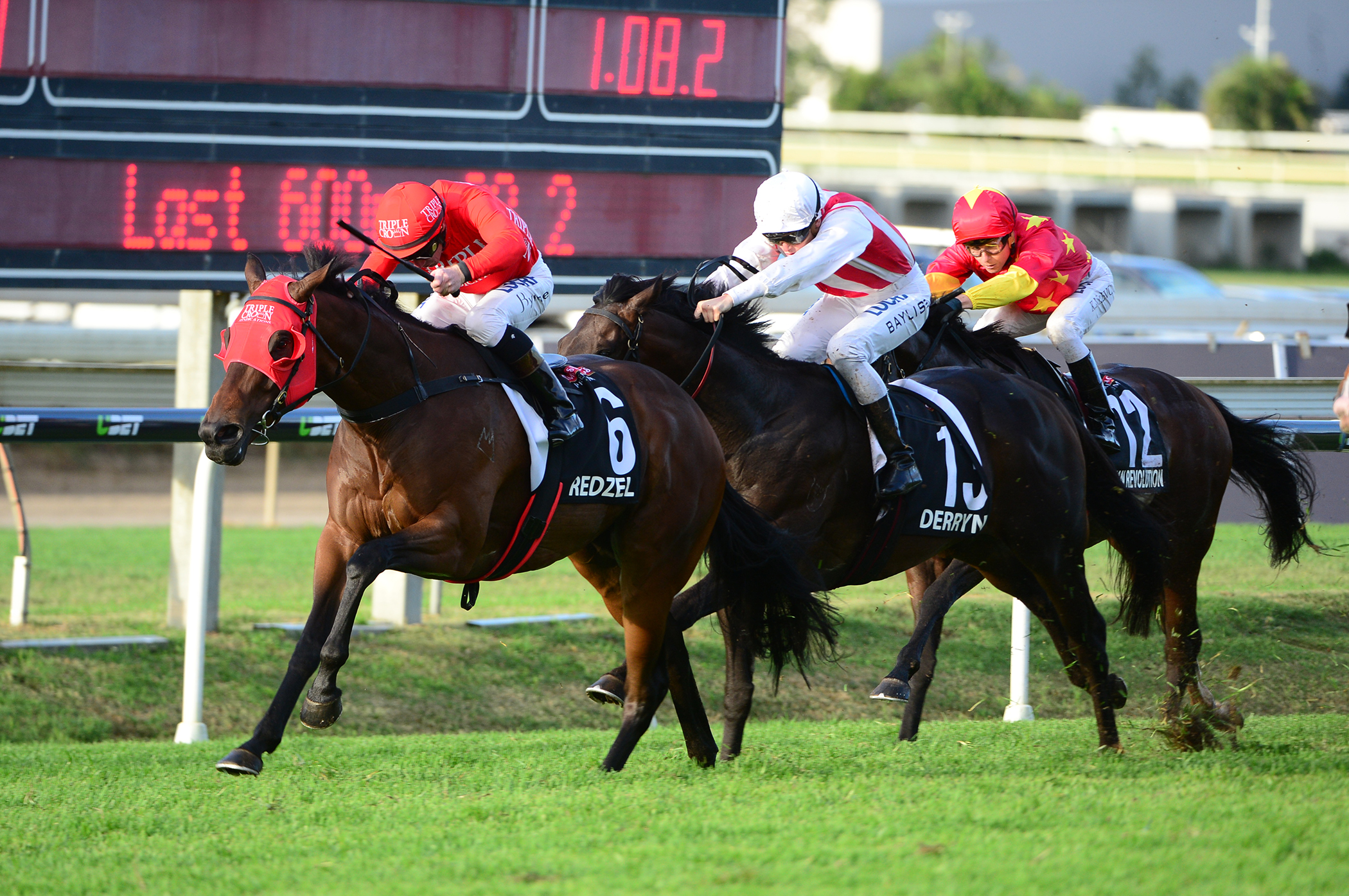 Usually the first thing you have to keep your eye out for in the winners’ enclosure is the actual winner. A 500 kilo horse still high on adrenalin is not always the healthiest thing to park yourself behind.

But at Doomben on Saturday it wasn’t safe for bystander or beast as the excited owners of Doomben 10,000 winner, Redzel, mustered a Group One display of high fives and hugs.

John Medland claims he was a tad more subdued than most of his compadres, but not by much.

“It was a tremendous result and even as we headed back to the airport, I reckon some of the owners could have flown home under their own steam!,” Medland enthused. “It’s a wonderful group of people … there’s about 15 or 16 in the ownership which includes a doctor, a taxi driver, even a former trotting driver. And they come from all over the place … Tasmania, Gosford, Melbourne, Adelaide, Queensland, Tamworth. From far and wide.

“I’ve raced horses for around eight years and been fortunate enough to have a couple of good ones: horses like El Sasso who has won six and nearly $270,000. I’ve had some other winners too and a couple on their way up.

“I didn’t know any of the other owners when I first got involved with Redzel however and full marks to Chris and Michael Ward of Triple Crown Syndications for bringing it all together … two nicer blokes you wouldn’t meet. They’ve been very successful since they started out and have syndicated horses like Hot Snitzel and Peggy Jean, which also won Group Ones, along with Dothraki, Charlie Boy, Gold Symphony, Flying Snitzel. They’re real professionals.

“Same goes with Peter and Paul Snowden – they’ve done a great job with this horse and they really make you feel involved with the entire process.

“People thought I might have been upset to have not won the Galaxy but it was a top run and that Russian Revolution is a very good horse.

“It was our day on Saturday though.”

Recently retired after being involved in the construction industry for 50 years, Medland is a keen follower of sports, having coached the NSW cricket team to Sheffield Shield success in 1982-83 following a 16 year drought and doesn’t mind the odd hit of golf either.

Indeed, one of the first among many congratulatory emails Medland was sorting through on Sunday came from some mates at Oatlands Golf Club in Sydney who used to race Millrich, the dam of Redzel.

“Funny how things work out,” Medland adds. “We only put two and two together after I got involved with Redzel, but Millrich was a very good racehorse who won a (Group Three) Sweet Embrace and ran third in the Golden Slipper. She was an outstanding broodmare as well … she’s had something like seven winners and is also the dam of another Group winner in Danerich.

“Must admit, every time I run into Millrich’s former owners they ask me how Redzel is going … I’m looking forward to telling them just how good he’s going next time we catch up!”

Snapped up by Triple Crown for $120,000 from the Marquee Stud draft at the 2014 Gold Coast Magic Millions Yearling Sale, Redzel was originally offered by Eliza Park (now Sun Stud) at the 2013 Inglis Sydney Weanling & Broodmare Sale where he was purchased for $45,000.

“He (Redzel) was bred by Lee Fleming (former owner of Eliza Park) and was a lovely style of horse … plenty of quality,” Sun Stud’s Sales & Nominations Manager, Phil Marshall recalls. “Probably would have made six figures but he had a couple of issues on his x-rays which held a few back. Clearly hasn’t held him back though.

“It’s actually been a big week for horses sold by Sun Stud … we also sold Vienna Miss for her breeder, Alastair Macfarlane of Tori Park Stud, and last week, Barney Ross, who we bred and sold in the northern hemisphere, ran second in the (Group One) Newmarket Two Thousand Guineas.”