Duryea’s Victory … From Grey To Sunny 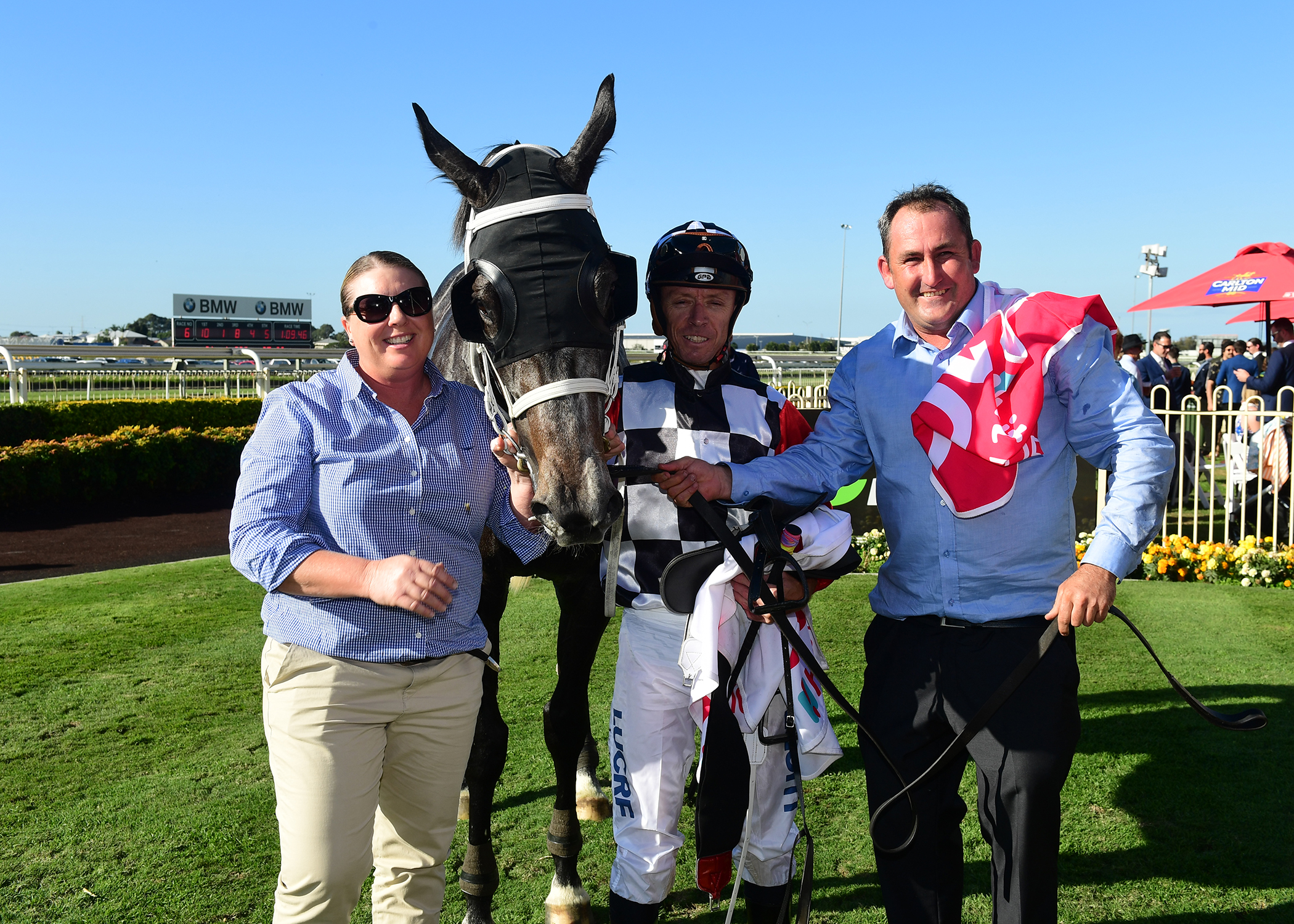 No-one would have blamed Beaudesert trainer, Darleen Duryea for having a drink or three after the races on Saturday night.

After all, her speedy 4YO, Sunny Victory, had got up in a thriller over 1200m at Doomben, taking his record to six wins and three placings from 19 starts.

It hasn’t all been smooth sailing though.

Purchased by Hong Kong interests for $80,000 at the 2014 Magic Millions National Yearling Sale, after having earlier been passed in at the Inglis Melbourne Premier, Sunny Victory turned out to be a grade five roarer.

A clearly impressed, Michael Cahill, suggested the horse was worth operating on however after riding him to a trial victory on the Gold Coast: and so they did.

Seven months later, Sunny Victory won his maiden at Ipswich and connections were entitled to think he might be something special.

Unfortunately, after Sunny Victory finished last of nine at his next outing, they discovered the flashy grey had an irregular heart beat – arrhythmia – which put the horse back to square one.

“It really affected him … I don’t think he wanted to really let go in his races for a while there, but he eventually got himself sorted and, since July last year has won five, including three in town,” a delighted Duryea points out. “He’s a big horse, but is absolutely stunning and very good natured.

“The intention, originally, was to race him in Hong Kong, given that we do a lot of educating and pre-training on behalf of clients up there, but with those earlier problems, they’ve decided to keep him here with me.

“And, it’s fair to say, that I’m pretty happy with that decision.”

Duryea has been training for 11 years, with usually around 30 in work, and also guided the handy galloper, Ongoing Venture to nine victories and over a quarter million in stakes, but Sunny Victory has shortened in the betting in terms of stable favourites.

“He (Sunny Victory) just needed a bit of time, a bit more maturity and now it’s all starting to come together,” Duryea adds. “He pulled up well from Saturday and I’ll probably give him another start before a let up. All things being equal, he might get a trip to Sydney and, fingers crossed, a tilt at the all greys race ($101,500 Apia Celebrating Greys) at Flemington on Oaks Day (11 November).”

Given her galloper’s roaring issues and arrhythmia, a visit to Flemington on Ladies Day would indeed be a Sunny Victory for Duryea.

Sunny Victory is one of 95 winners for the Yarraman Park based Fastnet Rock stallion, Hinchinbrook (Press Statement, Whispering Brook, Derryn etc.), while his dam, Mis Excitabull is a half sister to US stakes winner Tabletobetold and to the dam of of 2017 Group One winner Russian Revolution.