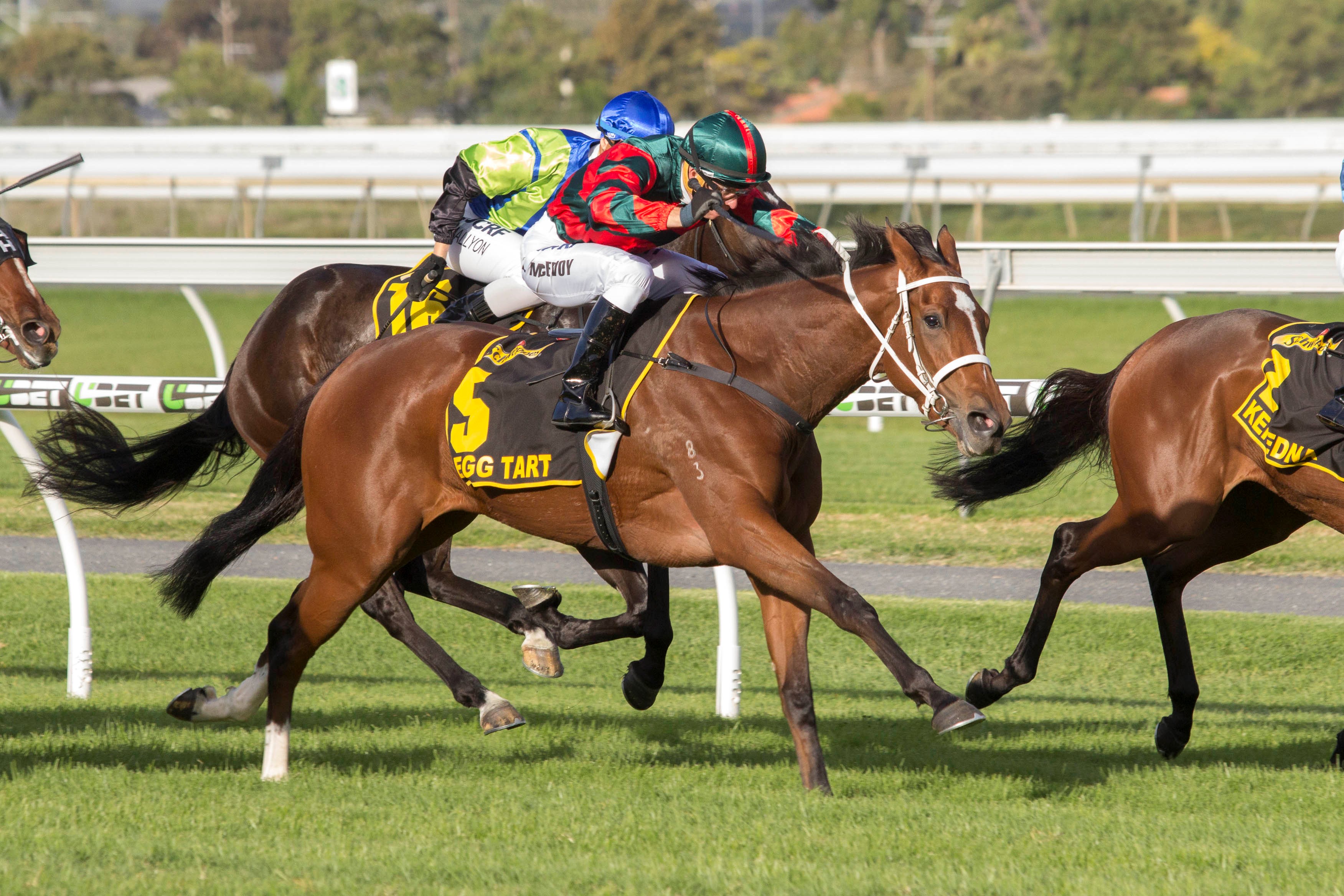 “Late foal. Late November as a matter of fact,” Egg Tart’s breeder, Tony Brown explains. “She was a nice enough type, slightly turned out, but time was against her. It’s hard to stand out at a sale like Easter and she was out of her league, but we’d just run out of options.”

Egg Tart didn’t escape the eye of astute agent, Anton Koolman, however, who snapped up the Sebring filly for Hermitage Thoroughbreds and watched on as the rising 3YO captured the Group One Schweppes Oaks over 2000m at Morphettville on Saturday.

It was Egg Tart’s fifth victory from seven starts – fifth win in a row actually – and the Oaks takes her earnings to $467,750.

Steadily moved up in distance (and class) by trainer Chris Waller, the Oaks was Egg Tart’s first time over 2000m but rather than feeling the last furlong, she appeared to relish it and flew home to nail hot favourite, Kenedna, right on the line.

The win provides the filly with a number of options including the SA Fillies Classic over 2500m in a fortnight or a trip north to Brisbane for the winter carnival.

“It will be left entirely up to Chris,” said Oliver Koolman, speaking on behalf of Hermitage Thoroughbreds’ Chinese owner. “He (Chris) has the infrastructure to successfully campaign his horses for all the major carnivals and whatever call he makes on Egg Tart will be fine by us.

“We’re very happy about the win in the Oaks. For a cheap horse, she has certainly delivered. She appears to have a very exciting career ahead.”

Koolman manages Hermitage Thoroughbreds – a boutique, 250 acre property at Camden in NSW – that was originally purchased in 2010 and which currently hosts around 40 horses and 50 head of cattle.

But what about the name, Egg Tart? “She’s named after a Chinese dessert … the others we bought that year were all colts, so she ended up with Egg Tart,” Koolman reveals.

It might have been applicable at the time, but there’s definitely nothing light and fluffy about the filly now!

Despite the whole late foal/low price experience, Egg Tart’s breeders are happy for the owners and, as a showcase for their Jorson Farm at Wondai in Queensland.

“She was a lovely foal, albeit late, and I’m not surprised she’s done so well,” Brown adds. “It was actually a pretty good year for us … we sold eight and six of them have won.

“Our property foals down around a dozen each year and we also prep a few breeze up horses … we’ve got 100 acres just north west of Toowoomba and look after it all ourselves. It’s very good when you end up with results like Saturday.”

The Browns purchased Mrs Windsor, who was carrying Egg Tart at the time, for $21,000 at the 2013 Inglis Broodmare Sale.

“Egg Tart is the second winner out of Mrs Windsor, a half sister to Group One winners Heart Ruler and Coronation Day and daughter of Metropolitan winner, Born To Be Queen,” Brown points out. “Unfortunately, Mrs Windsor died last year but it looks like she’s got a good one in Egg Tart to carry on for the family.”

Egg Tart is the 29th stakes winner for Widden Stud based, Sebring, and his fourth Group One winner after Criterion and Dissident and, as of Sunday evening, Lucky Bubbles (Chairman’s Sprint Prize in Hong Kong).