Another Emirates Slipper Is The Right Response 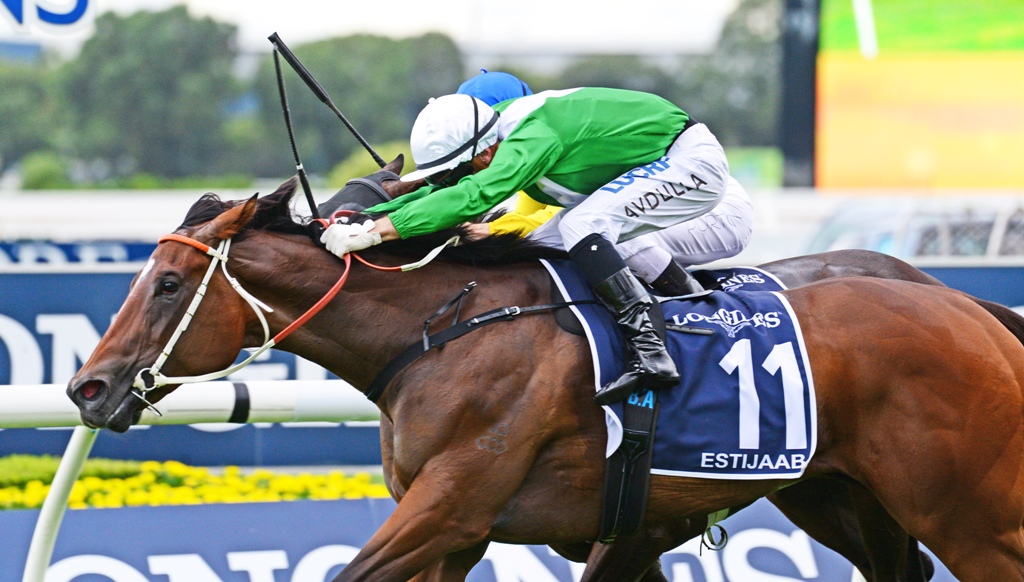 You could be excused a sense of déjà vu from Saturday’s $3.5 million Group One Longines Golden Slipper Stakes over 1200m at Rosehill Gardens.

Brilliant youngster, Estijaab – sporting the green and white silks of Emirates Park and trained by Team Hawkes – led throughout and successfully held off the challenges of Oohood and favourite, Sunlight. An all-female trifecta.

Four years earlier, Mossfun flew the green and white ‘flag’ too, lifting the Slipper from a pair of fillies in Earthquake and Bring Me The Maid.

Again, Mossfun is owned by Emirates Park and was trained by Hawkes and Sons.

However, where few had heard of Mossfun prior to her debut success in December 2013, Estijaab had already garnered a good share of the headlines before even stepping onto a racetrack.

Late on day two of the 2017 Inglis Australian Easter Yearling Sale, Estijaab was paraded in front of an expectant crowd at Newmarket and eventually knocked down to Emirates Park for $1.7 million – the second highest price for a filly at an auction which yielded an incredible 17, seven figure sales.

Comparatively, Mossfun – appearing in Book 2 at Easter ’13 – made just $85,000 in a field that was overshadowed by the $5 million for Black Caviar’s half brother.

Such are the vagaries of our (thoroughbred) world.

“Trevor Lobb, who was working for us at that time, really liked the filly (Mossfun) and we ended up getting her for good money and she was placed with Team Hawkes where she well and truly punched above her weight,” Emirates Park General Manager, Bryan Carlson, explains. “Different story with Estijaab though. We had a list of five fillies at last year’s sale and after comparing notes with the Hawkes’s, she (Estijaab) was at the top of both lists. John simply said, ‘you can’t go home without her’.

“We anticipated she’d make around $1.2 million but being such a terrific filly – she really did tick all the boxes – it was decided to go that extra mile. After Saturday, we’re certainly glad we did.”

Aside from the obvious residual value, Estijaab has now won $2,335,075 in prizemoney.

Last year Emirates Park entered into a joint partnership – leasing its farm and stallions to Aquis Farm – with Carlson and co. now concentrating on the racehorses and a steadily growing band of broodmares.

“You really can’t compare one Slipper to the other,” Carlson reveals. “All I can say is that it’s a tremendous race to win and underlines what you’re trying to achieve in this industry.

“Estijaab will eventually join a team of around 100 high quality broodmares which include Mossfun, whose Fastnet Rock filly – a yearling – is now at the breakers, while the mare herself is in England and currently in foal to Frankel.

“We also keep shares in a number of colts we breed on the farm, like Santos for instance. He won the (Group Two) Skyline and raced in Saturday’s Slipper and is by I Am Invincible out of a Secret Savings mare.

“He’s third generation off the farm.

“Ultimately, when you spend $1.7 million on a horse like Estijaab it’s comforting to know they have ability, but for Nasser Lootah and his son Hussain, this is not really about the money, but the passion for the sport.

“They love their horses and, fittingly, got the result on Saturday.”

Estijaab’s three quarter brother, De Gaulle – by Exceed And Excel – showed plenty of promise in 2YO trials but unfortunately had to be retired, unraced, due to a tendon injury.

Owned by Newgate Farm, China Horse Club, SF Bloodstock and Winstar Farm, De Gaulle was secured by Pratt last year through Tim Brown of Magic Millions and stood his first season at Brooker Farm at a fee of $2,200.

Meanwhile, Moody has several options open to him for the full sister to Estijaab he purchased for just $350,000 at this year’s Gold Coast Magic Millions Yearling Sale.

“She was typical of the family in that she was a bit undersized, but I really thought she’d end up going for around $600,000 to $800,000, particularly based on what the filly (Estijaab) made the year before,” Moody recalls.

(It should also be noted that Estijaab was unraced at that time of Moody’s purchase).

“I might keep her to race, but there’s also the chance I could put her in as a wildcard entry for the Inglis Chairman’s Sale next month or even the Magic Millions National on the Gold Coast in June. I’m in the business of trading horses these days, but she’d be a good one to race all the same. It’s always nice to have choices.”

“It turned out to be a pretty good sale for me!”