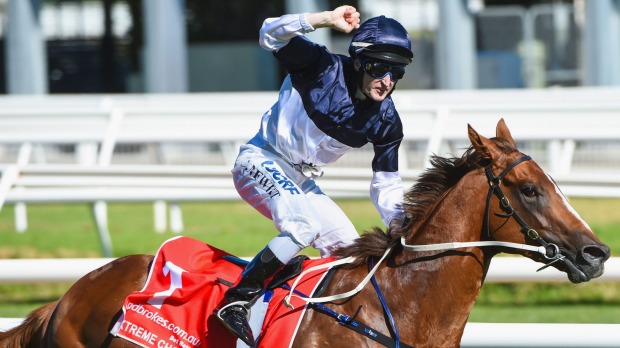 He was already celebrating, with tears, in a huddle with his wife Georgie and family.

“We were pretty reserved before the race, we knew he was a serious colt and there was an expectation from the stable that he would go well but you want to see them do it when it counts,” Ferguson said.

“But when Froggy (Craig Newitt) came around the bend with plenty up his sleeve I just burst in to tears and we were celebrating before he even hit the winning post.

“It was a surreal moment, something you’d think would only happen in a dream.”

Ferguson and Georgie run Bell River Thoroughbred’s from their Wellington base in New South Wales.

They have been tremendous supporters of Arrowfield’s Not A Single Doubt, and Ferguson has his father-in-law Bruce Reid to thank for that.

“I dragged Bruce to the races at Randwick one day, he backed four horses in a seven horse field and the three he didn’t touch ran first, second and third,” Ferguson said.

“He turned to me and said that’s it, this is a mugs game.

“Cut a long story short, soon enough he had bought shares in Not A Single Doubt, Savabeel, Econsul, Monaco Consul, he had plenty of luck that is for sure.

“But I always thought Not A Single Doubt (pictured left) was a better horse than his record suggested.

“So when I started in this game about eight years ago, he was the perfect stallion to centre my business around because his service fee was $10,000 and I had a good opinion of him.”

That opinion is certainly paying dividends now for Ferguson, who purchased Extreme Choice’s dam Extremely in foal to Not A Single Doubt.

“I never lost faith in Not A Single Doubt and early on he wasn’t getting many mares, but then he covered two big books and I saw an opportunity to buy the best mares around in foal to him.

“Like anything in this game, you need things to go your way and thankfully we’ve had a bit of luck.”

Not A Single Doubt, aided by the deeds of Extreme Choice on Saturday, is now at the top of the Australian General Sires’ premiership, edging ahead of Street Cry.

Extremely is back in foal to Not A Single doubt and Bell River Thoroughbreds have a Duporth filly and a weanling by Smart Missile on the ground.