From Tassie To Mongolia – A Horse For The Years 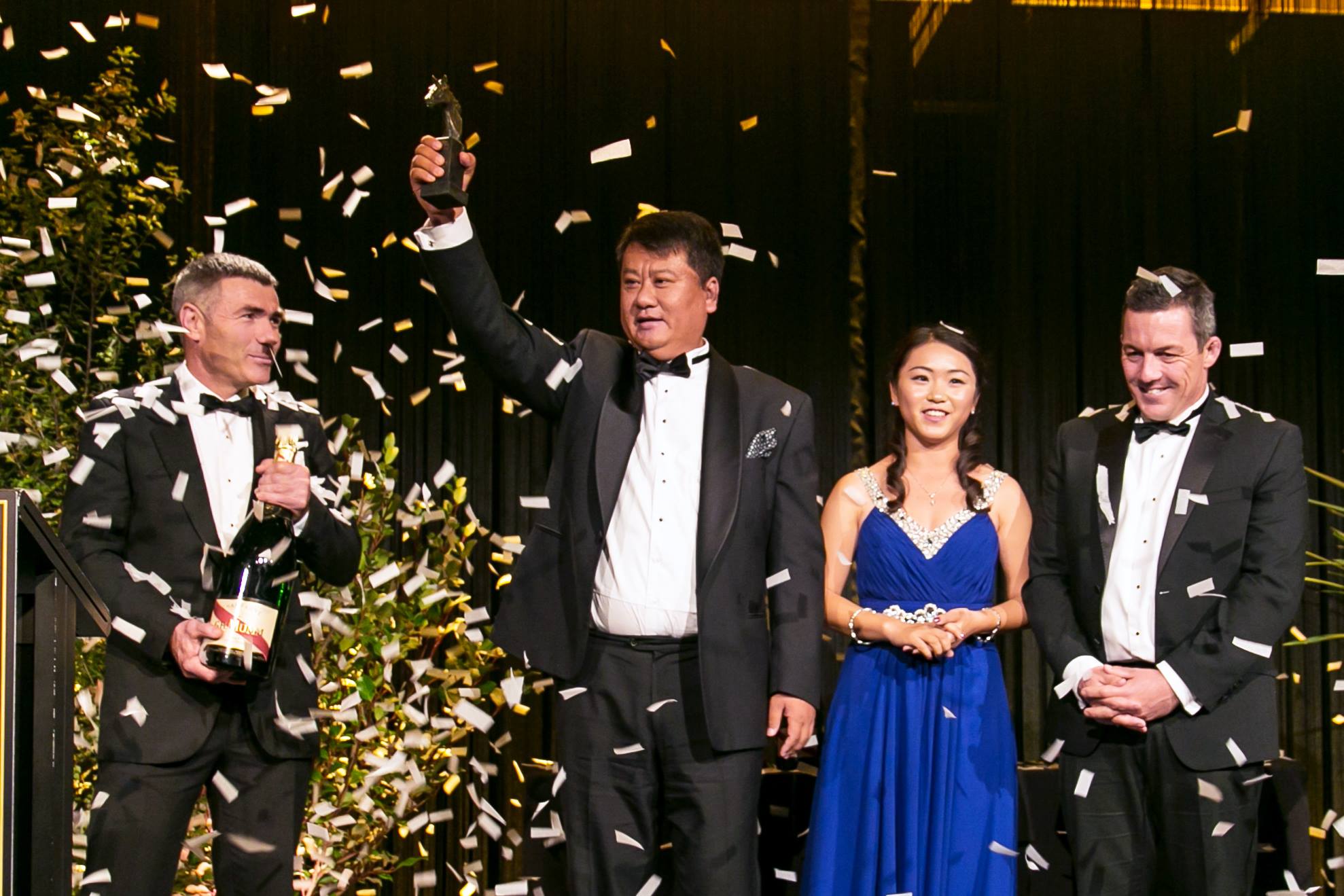 In a gala affair at Auckland’s Langham Hotel on Sunday night, Australian-bred Mongolian Khan was acknowledged as New Zealand Horse of the Year for the second year in a row.

Bred in Tasmania and winner of the NZ Derby and ATC Derby, Mongolian Khan won the 2015 Caulfield Cup and aside from his back-to-back Horse of the Year awards, the son of Holy Roman Emperor was also named New Zealand’s Champion Stayer.

Graeme McCulloch won’t forget Sunday in a hurry. McCulloch puts a new definition on ‘laid-back’ and is hesitant to big note himself, but the Tasmanian-based breeder/stallion master/owner/trainer had a very good day on the office.

Training for some 40 years from his (near) Launceston base, McCulloch produced a double at Devonport on Sunday with Sunset Party and Tara’s Gem … two more notches in a belt that stretches from both sides of the Bass Strait and includes a Hobart Cup winner.

McCulloch also calls the shots at Grenville Stud where, over the years, he has stood some leading Apple Isle stallions: foremost among them the prolific Gone West stallion, West Quest.

But it was from the comfort of his armchair that McCulloch has effectively written himself into the record books as the breeder of Mongolian Khan, the winner of successive New Zealand Horse of the Year Awards.

“It’s probably fair to say that I was more confident about his chances last year,” McCulloch confides. “Mongolian Khan had won the Waikato Guineas, Avondale Guineas and the New Zealand Derby, before heading across to Sydney and winning the Australian Derby.

“That said, it was a very good win in the (2015) Caulfield Cup and clearly enough to get him across the line as far as successive New Zealand Horse of The Year honours were concerned.”

Out of McCulloch’s Centaine mare, Centafit, Mongolian Khan was put through the 2012 Inglis Great Southern Sale as a weanling, where he was purchased for $9,000.

“I actually bought him back because I’d sent the mare on a foal share, with Coolmore, to Holy Roman Emperor.

“She (Centafit) is a pretty stout mare and you need to send her to something with a fair bit of speed and the Danehill (sire of Holy Roman Emperor) influence was obviously a factor.

“Courtney and Mandy Howells of Ainsley Downs Stud in New Zealand were also interested in Mongolian Khan and, given that his half brother – Young Centaur – had won a Wellington Cup, we decided to put him through the Karaka Yearling Sale where he sold for $NZ140,000. We thought he’d only make around $50,000.

“He later sold as a Ready To Run horse for $NZ220,000 which means that everyone has made good money out of that horse.”

Haven’t they what! By the time of Mongolian Khan’s racetrack retirement, following the Sydney autumn carnival, his prizemoney tally had nearly reached $4 million from eight wins and a third in 17 outings.

Is there another Mongolian Khan on the way?

“The mare (Centafit) is still going strong, but she’s 24 now. I sent her to Brazen Beau last spring and she’s due to foal in October, while her Magnus 2YO (Lickety Split) is with Kelly Schweida in Queensland.

“I’ll keep Centafit here in Tasmania after she foals this time and, make a decision then on whether to send her to one my stallions: Cardinal Virtue or Mawingo.”

Centafit has been an erratic breeder to say the least and, prior to McCulloch getting the mare in 2003, she had produced a colt (Orlando Flyer) – then slipped – had a dead foal – slipped again – another foal died – and missed.

Fortuitously, McCulloch purchased Centafit before Young Centaur had made his mark and, despite her ups and downs, has clearly been worth persisting with.

“She doesn’t do very well – in terms of getting in foal – when she has a foal on her,” McCulloch adds. “Ironically though, she got in foal to Holy Roman Emperor when she had a foal at foot.”

While McCulloch is reluctant to push his own barrow, he is proud of the fact that his beloved Tasmania – with its relatively small breeding industry – has been able to produce a back-to-back New Zealand Horse of the Year.

“It was a big season for Tasmania,” McCulloch enthused. “Aside from Mongolian Khan, Jenny Watson is the breeder of (2016) Australian Guineas winner Palentino.

“The Australian thoroughbred industry, deservedly, gets a lot of recognition for breeding some of the world’s fastest horses, but it just goes to show that with horses like Mongolian Khan, we can breed some pretty good stayers too!”

HOOFNOTE: Australian-bred, Bagalollies, was also crowned New Zealand Broodmare of the Year: fitting recognition for the mother of Hong Kong Horse of the Year, Werther.