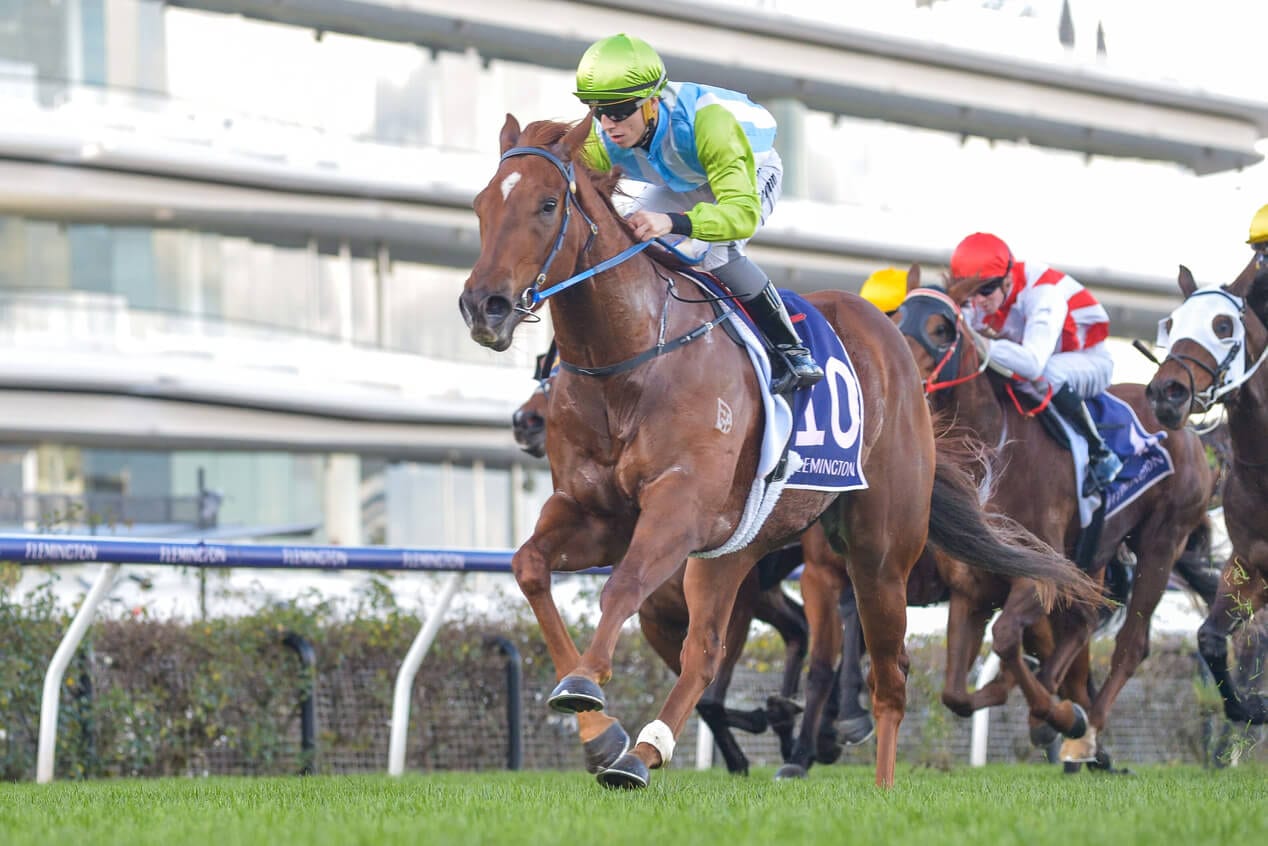 It was nearly 50 years ago that then apprentice, Geoff Duryea, rode Red Hope in the 1973 Melbourne Cup, finishing 20th behind Gala Supreme.

It was a career highlight for Duryea who, just 10 years later, would be forced to give up the saddle due to increasing weight.

Now training for the last 37 years and with just eight in work at his Corowa, NSW stables, Duryea has returned to Flemington on numerous occasions, with his last win at ‘headquarters’ in 2006.

However, last Saturday, Flemington would be the scene of his greatest triumph as a trainer when exciting 3YO, Front Page, produced a blistering performance down the famous ‘straight six’ to capture the Listed AR Creswick Stakes.

Unfortunately for Duryea, he had to cheer on from his lounge room as son, Paul – who is also the official breeder of Front Page – represented the stable at Flemington. Still, it was no less exciting.

“He (Front Page) had won well at Albury (by 10 lengths!) in May and led all the way at Wangaratta earlier this month, but I wasn’t sure how he’d handle the step up in grade on Saturday,” Duryea mused. “He certainly was travelling well throughout and I thought at the 600m he’d be hard to beat. Still, you get pretty nervous and I really didn’t think he’d win as strongly as he did.”

He did indeed. Despite the soft track, Front Page won the Creswick by nearly three lengths, taking his tally to four wins and a second from six starts. A very good time too with his 1:09.56 bettering that of the two previous Creswick title holders Nature Strip (1:10.05 in 2018) and Gytrash (1:11.40 in 2019) … who both went on to win Group Ones.

Fittingly, Front Page would be piloted by apprentice, Lewis German, who notched up a black type first at his fourth attempt.

“These opportunities don’t come around very often for apprentices,” a grateful German pointed out. “I’ve had a little bit of success for Geoff and his owners and I went up to Wangaratta to ride the horse a few weeks ago and he blitzed them up there too.”

It’s certainly been a steady rise for Front Page who was beaten in March – as odds on favourite – in a Benchmark 58 at his home track.

Front Page becomes the 22nd stakes winner for Sun Stud’s Magnus and he is out of the winning Bel Esprit mare, Stacey Lee.

Although Front Page becomes his laid-back trainer’s first stakes winner, Duryea believes the 3YO still has some catching up to his year older full sister, News Girl.

“She (News Girl) is a very good mare who has won five races and nearly $350,000 in stakes,” Duryea explains. “She’s won three in Melbourne and is Group placed in both the Kevin Hayes Stakes and Geoffrey Bellmaine Stakes.

“News Girl and Front Page are both by Magnus but are totally different types … she just jumps and runs, whereas he doesn’t care about anything … you could drop a bomb under him and he wouldn’t move.

“News Girl has been in the paddock for three weeks and Front Page is about to join her.

“We’re considering the Kosciuszko in October for the pair of them, but we’ll just wait and see. The way Front Page switched gears so quickly on Saturday opens up quite a few spring options.”

(The $1.3 million Kosciuszko is exclusive to country trained gallopers and will be staged over 1200m at Randwick on 17 October).

Duryea is also quick to acknowledge that his decision to pay $20,000 for the Bel Esprit filly – Stacey Lee – at the 2009 Inglis Weanling Sale was an astute move.

“She (Stacey Lee) was raced by friends and despite having chronic knee problems, she could run terrific sectionals and ended up winning five races for us,” Duryea reveals. “The owners weren’t interested in breeding from her and so my family and a couple of friends took her over.

“She’s our only broodmare and the first foal was News Girl and the second was Front Page. Two runners, two winners … one of them a stakes winner and the other multiple Group placed.

“We’ve got an unraced 2YO called Page Three out of the mare, a Dundeel filly that she foaled last spring and she’s in foal to Rubick. Stacey Lee didn’t get in foal until mid December so she won’t be covered again this time around, but I’d imagine we’ll have plenty to choose from in 2021 if Front Page and News Girl keep going the way they have been.”