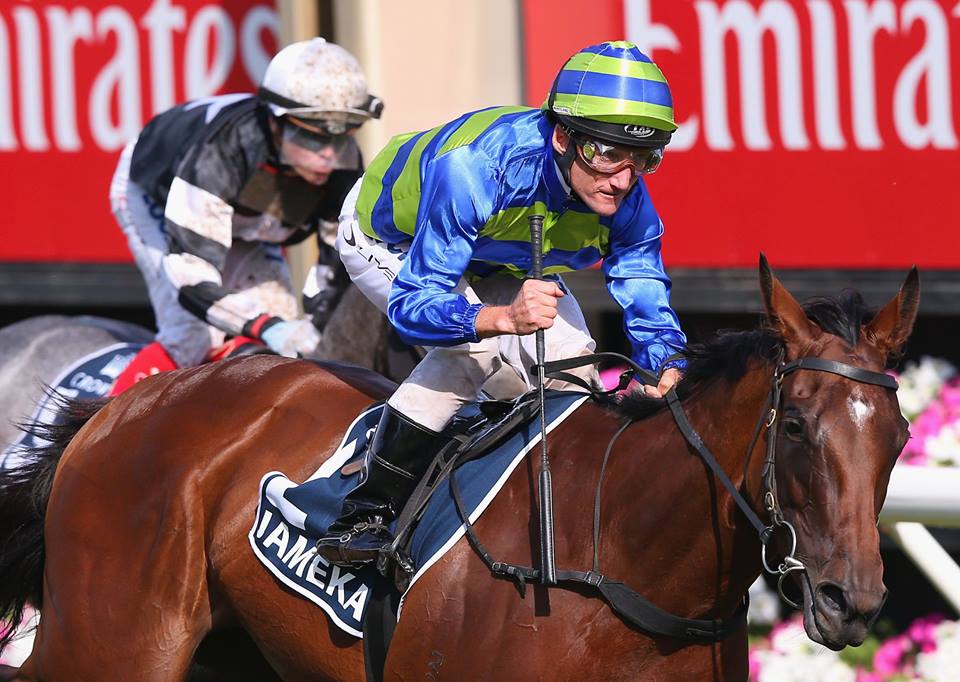 Sold by the farm at the Inglis Premier Yearling Sale to trainer Ciaron Maher for $130,000, the daughter of Vinery Stud’s Myboycharlie headed into the Oaks with some of the strongest form lines, having defeated subsequent Group 1 Victoria Derby winner Tarzino in the in Group 2 Moonee Valley Vase.

Showing superior staying ability, the victory of the filly gave Maher back to back wins in the Oaks having secured the race 12 months prior with Reset’s daughter Set Square.

“There’s nothing better than winning a big race during the Flemington carnival. That’s what it’s all about,” said Maher.

“I’m just thrilled to be able to do it for the second year with very [two] high quality fillies.

Jameka is first foal out of the General Nediym mare Mine Games, who foaled a filly this spring by Group 1 W.S. Cox Plate winner Shamus Award.

Bred along similar pedigree lines, with both Myboycharlie and Shamus Award being Danehill-line stallions, it will be interesting to see if this filly shows the staying prowess of her sister or not.

While the win was a special one for Jamieson, it wasn’t the only stakes winner from the farm successful during the Flemington week.

Robbie Griffiths’ sprinter The Quarterback, a son of Street Boss raced away to win the Listed Dilmah Stakes.

Settling a long way back in the field down the straight, jockey Matthew Allen urged the five-year-old along, and he surged along the inside rail to defeat Wild Rain who had headed towards the inside rail.

“He’s an exciting horse, he’s got a massive finish and when he unleashes it, like he did today, he’s exciting to watch,” Griffiths said.

“I was concerned with how far back he was in the run, but I can see that Matthew [Allen] had a good hold on him and he knows that he can time a run like that on him, so he’s got a lot of belief in the horse and he knows his capabilities.

Out of the Encosta de Lago mare Soorena, The Quarterback is one of two stakes winners for the mare joing half-brother Philippi (Vanilla (HK)), a winner of the three stakes races highlighted by the Group 2 Tulloch Stakes.

Soorena produced a colt by Yarraman Park’s Champion first season sire I Am Invincible back in September.