Carramar’s Garibaldi Is A Classic Result 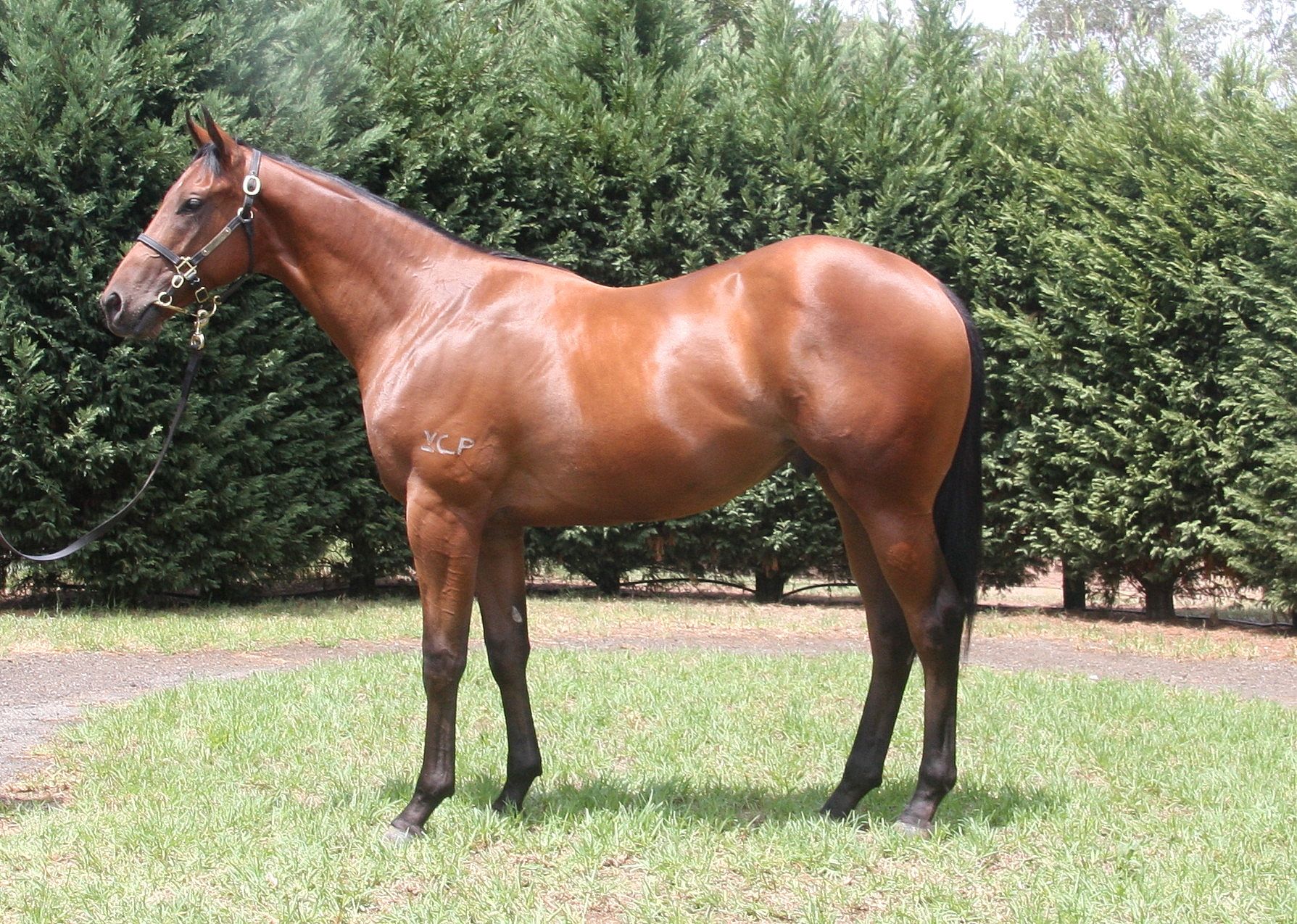 Garibaldi as a yearling (Inglis)

Alchin was a good hike away from Eagle Farm – several hundred kilometres south as a matter of fact – given that he’s busily preparing a team of 15 youngsters for this week’s Inglis Sydney Classic Yearling Sale.

However, Alchin had a special interest in the race as Garibaldi – the colt he sold for $475,000 at last year’s Classic – was making his debut for Tony Gollan.

Turns out Alchin had little cause for anxiety though as Garibaldi cruised to the lead in the straight to notch up a comfortable victory and the I Am Invincible colt will now target the $3.5 million Golden Slipper in March.

Although Alchin didn’t retain a share in Garibaldi, the pre-race jitters would have had a lot to do with the fact Carramar Park will sell a Dissident half sister (Lot 110) to Garibaldi during the first session of the Sydney Classic on Saturday night.

“I always had confidence that Garibaldi would be a good racehorse,” Alchin enthused. “He’s a big, athletic type with a really good nature … one cool dude.

“He could easily have made his way into Easter but there was quite a few I Am Invincibles there and I thought he’d stand out at the Classic and he surely did.”

The $475,000 was just $5,000 short of the eventual sale topper and the highest price ever secured by Carramar Park at a yearling sale.

A 200 acre operation spanning two properties at Grose Wold, west of Sydney, the Alchins have run Carramar Park for 30 years: primarily for spelling, but also prepping around 10 to 15 yearlings annually.

“Garibaldi’s mum is the winning Exceed And Excel mare, Sonnenblume, who is out of the Group One winner, Shindig and a three quarter sister to Group One winning sprinter in Shinzig and the multiple stakes winner Strada,” Alchin explains. “We purchased Sonnenblume privately from Philippa Duncan Bloodstock and sent her to Sebring that first year. The resultant filly, Seeblume, was a winner in Sydney and Sonnenblume has currently had three winners from four to race.

“Garibaldi is her fourth foal … I managed to get the mare into I Am Invincible when he was only standing for $25,000 and shortly after that, pretty much everything exploded around the stallion. A nearly 20 times return on service fee is a pretty good result!

“I’m very happy too with the Dissident filly we’re selling this week. She’s a lovely type of filly and the sire is off to a good start with his first crop of 2YOs. Should be a very interesting week.”

Inglis is certainly gearing up for a busy five days with Saturday’s $2 million Inglis Millennium (for 2YO sale graduates) and $1 million Inglis Sprint for 3YOs at Warwick Farm to be followed by the first session of the 2019 Inglis Sydney Classic Yearling Sale, from 6pm, at its Riverside Stables.

Having kicked off with much fanfare from its new digs just 12 months ago, Riverside will get a very good workout over the ensuing four days – Sunday, Monday, Tuesday and Thursday – with nearly 1000 Inglis Classic yearlings set to go through the ring.

Variety? The progeny of 110 stallions (14 by I Am Invincible) will be on display – including the initial offerings from 22 first season sires – while there are relations to 76 stakes winners, including Group One winners Youngstar, Your Song, Under The Louvre, In Her Time, Headway, Long John, Questing New and Signify.

Meanwhile, Inglis has almost doubled the number – up to 103 – of progeny from stakes winning mares, 10 of those Group One winners.

“Even with the inaugural Millennium and the $1 million Sprint garnering so much attention, there’s plenty of excitement about the lineup of yearlings,” Inglis Managing Director, Mark Webster enthused. “The Classic sale has long been regarded as a tremendous source of talent, particularly at value prices: Yankee Rose cost $10,000 and won over $2 million … the following year She Will Reign was knocked down for just $20,000 and won a Golden Slipper and $3.2 million … while, in 2018 alone, four Group One winners in Extra Brut, Maid of Heaven, Hellbent and In Her Time, were all graduates from Classic.

“Inspections started in earnest on Monday morning and plenty of potential buyers were there from the get go. There’s already a terrific buzz around the complex.”

HOOFNOTE: Another of the 2018 Inglis Sydney Classic Yearling Sale graduates to taste success on the weekend was the Robbie Griffiths trained, Magnicity, scoring over the 1000m at Moonee Valley on Friday night.

Sold by Edinburgh Park for $70,000 (having earlier been pinhooked for $40,000 from the 2017 Inglis Great Southern Weanling Sale), Magnicity had two previous midfield finishes in black type races during the spring, but didn’t miss a beat at the Valley.

Magnicity is by the Sun Stud based, Magnus and is from the Exceed And Excel mare, A City Girl, in turn a half sister to Magnus stakes winner Missy Cummings.

The sire of 17 stakes winners, Magnus was a Group One winning sprinter, closely related to Black Caviar, who was bred and raced by Rob Crabtree who is also the breeder and owner of Missy Cummings.

Griffiths, who is in Sydney this week for the yearling sale, has had a long association with Magnus and is, indeed, the stallion’s most ‘successful’ trainer.

“I’ve had 19 runners by Magnus and 18 of them have won!,” Griffiths reveals. “I trained one of his early stakes winners in Prettyhappyaboutit, along with horses like Roman Fizz and Scandimania.

“We’ve also bred to him several times and, as a matter of fact, our home-bred, Halvorsen, won the VOBIS Gold Carat at Moonee Valley 10 days ago and backed up on Saturday with a good second in the (Group Three) Manfred Stakes at Caulfield.

“Hopefully with that kind of strike rate, Rob will eventually send me another one of his Magnus’s to train!,” Griffiths adds with a laugh.