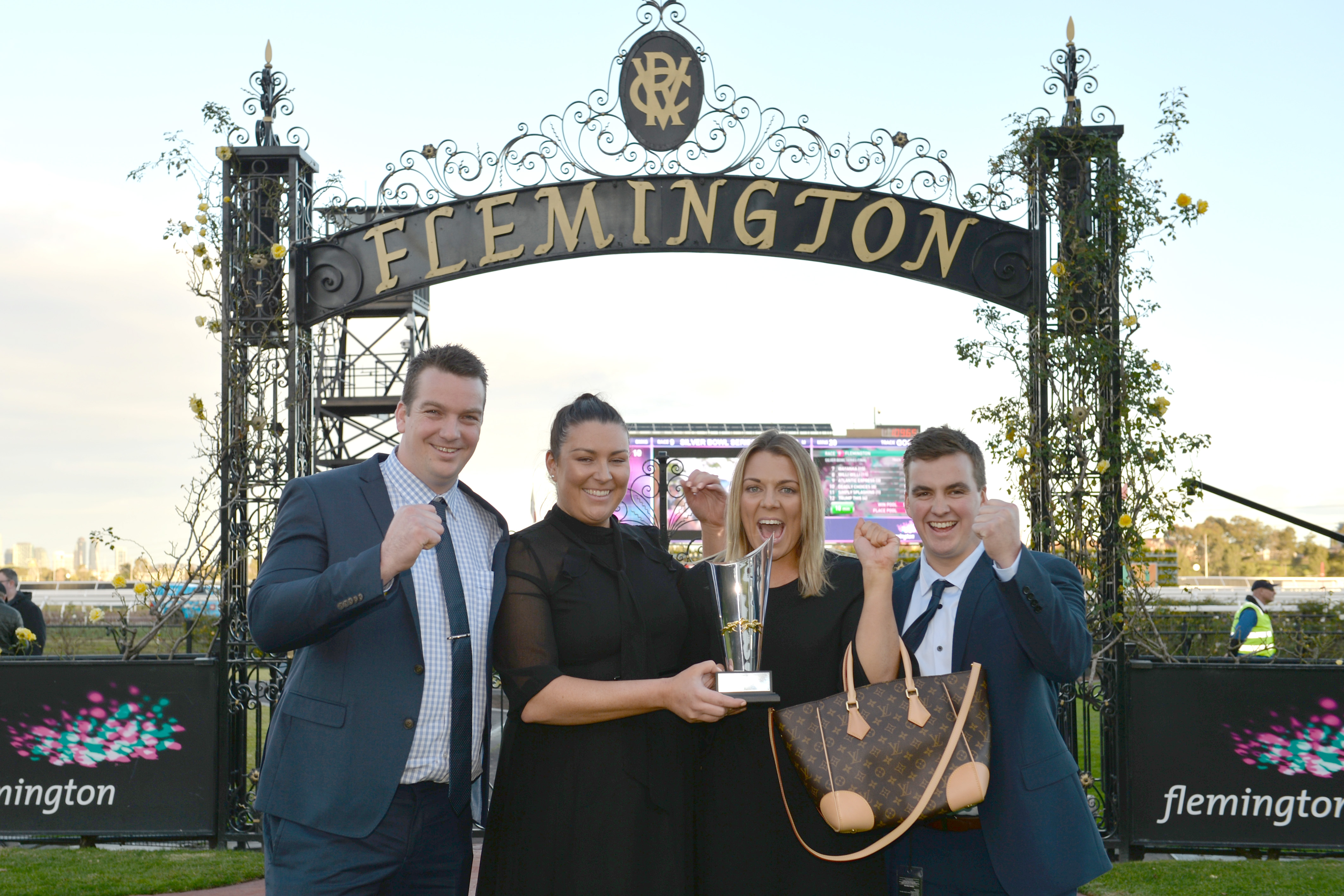 The connections of Ability celebrate the gelding's win (Racing Photos).

It’s a sad fact of life that all horses don’t live up to lofty monikers, but in the case of Robert Smerdon’s lightning quick, Ability, the ‘handle’ is more than justified.

The 4YO looked every inch the winner in Saturday’s Listed All Victorian Sprint Final down the Flemington straight, sitting just off the pace before swooping in the final furlong to capture his first black type victory.

The All Victorian Sprint Final was particularly poignant for Smerdon as he trains the horse for the family of the late Phil Sly, a larger than life industry figure who died last year after a long battle with cancer.

Sly owned many horses over the years and was a regular at yearling sales, but also raced a number of horses in Japan through his close association with Katsumi Yoshida.

While a number of stakes winners raced in the familiar white, red and royal blue silks, the 4-time Group One winner, Mosheen (VRC Oaks, Randwick Guineas etc.) and Politeness (Myer Classic and five other stakes victories) were arguably the picks of the bunch.

Described by Smerdon as unflappable in defeat as in victory, he would have had plenty to be bullish about after Ability’s run on Saturday.

While Ability might have a fair way to go before catching up with Mosheen or Politeness, the All Victorian Sprint Final is definitely a stride in the right direction.

The horse has certainly gone ahead in leaps and bounds since resuming from an eight month layoff due to having a bone chip removed. Ability’s ‘concentration’ is yet another improvement, courtesy of a gelding operation, and Saturday’s victory was his third in a row since the first week of June.

Smerdon was guarded as to Ability’s immediate future, but was leaning toward a short spell before bringing the rising 5YO back for the major sprints during the Melbourne spring carnival.

Ability provided his sire – the Chatswood Stud based Reward For Effort – with black type winners in successive weeks,  after Gold Symphony’s Civic Stakes victory at Rosehill the previous Saturday, and is the only foal to race from the Dubai Destination mare, Paeroa, a half sister to Group Two winner Well Rounded.

Offered by Yallambee Stud at the 2014 Inglis Melbourne Premier Yearling Sale, Ability was purchased – on Smerdon’s behalf – by Matchem Genetics for $150,000.

Created by Byron Rogers and stemming from his successful North American venture, Performance Genetics, Matchem Genetics has enjoyed considerable success since hanging out its shingle four years ago.

“We purchased 12 horses in that first year and four are now stakes winners including Fontiton, Chabaud, Indarra and Ability,” Matchem Genetic’s General Manager, Suman Hedge reveals. “Initially, we were assisting Robert Smerdon and John Sadler, but over the last couple of years we’ve had David Hayes and Mick Price utilising our service for all their yearling purchases as well. Another is up and coming trainer Stuart Webb who selected multiple Group winner, Legless Veuve, on Matchem’s advice.

“We now buy around eight or nine yearlings annually for our syndication arm which has approximately 25 horses on its books. Since starting out, Matchem Genetics has identified some six Group winners and another half a dozen stakes performers.

“Matchem Genetics identifies potential purchases based on three categories … cardio, biomechanical and DNA. Without going into too much detail, we measure our findings with an algorithm and rate horses from A to D.

“The important thing to remember is that Matchem Genetics is an enhancement, not a substitute. We don’t suggest trainers change their MO. They go through their normal process of inspections and usually come to Matchem Genetics when they’ve worked out their short list.

“He (Ability) definitely fell into the ‘Elite’ class and has shown potential all the way through. He’s very genuine now after having the bone chip removed and being gelded and is definitely on an upward spiral.”