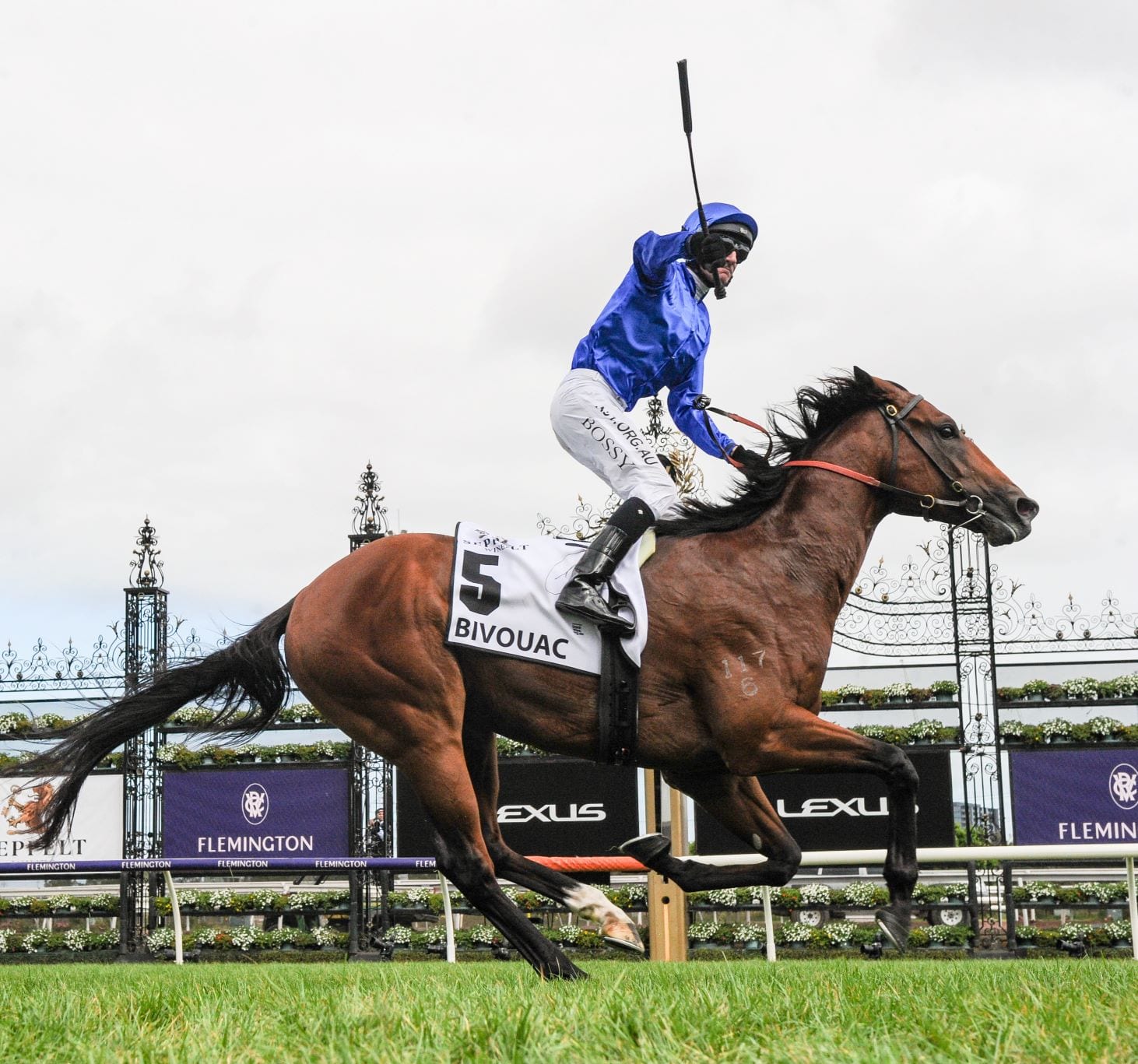 Yes, he’s by a super sire and yes, he’s from a very good black type family too. And yes, he won arguably Australia’s premier sprint, the Group One Newmarket Handicap.

Sound familiar? Well, for the moment we’re talking about Exceed And Excel – a son of the legendary Danehill – who won the 2004 Newmarket as a 3YO at his last run in Australia.

Champion Sprinter status aside, little did we know that Exceed And Excel would go on to produce 1,439 winners of $192 million (and counting), including 166 stakes winners: among them Bivouac, conqueror of Saturday’s $1.25 million Group One Seppelt Wines Newmarket Handicap down the Flemington straight.

As Bren O’Brien, somewhat presciently, pointed out in a TDN profile last Friday, Bivouac would become Exceed And Excel’s first Newmarket winner and therefore emulate the last father-son duo to capture the race … Heroic (1926) and Ajax (1938). While Heroic was a perennial champion sire throughout the 30s, Ajax would also go on to produce a number of outstanding gallopers in his own right.

It would take Exceed And Excel and Bivouac a smidge longer to replicate the Newmarket double – 16 years – but based on the dominance of his victory on Saturday, Godolphin will be giving the star sprinter every chance in the stallion barn.

Fortunately for racegoers though, it won’t be just yet as the ‘Blue Army’ intends to race Bivouac as a 4YO, with his next target either the Group One William Reid Stakes at Moonee Valley on 20 March or the Group One TJ Smith Stakes at Royal Randwick on 4 April – both races over 1200m.

Winner of six from 13 starts, including four placings and $2,147,000 in stakes, Bivouac was a dual stakes winner at two, but has really left his mark at three, capturing the Group Three Vain Stakes, Group Two Run To The Rose and Group One Golden Rose before signing off in the spring with a long neck second to Exceedance in the Group One Coolmore Stud Stakes.

Indeed, it’s been something of a duel between Exceedance (favourite for the Newmarket but eventually finishing sixth) and Bivouac with the score currently sitting at 3-2 in the latter’s favour.

The Golden Rose alone would have been enough to earn Bivouac a berth in the Godolphin breeding shed, but his impeccable pedigree only adds to the lustre. Bivouac is out of the multiple 2YO winning More Than Ready mare, Dazzler (3 winners from 3 to race) and is, in turn, a half sister to Champion 3YO Filly Guelph, also by Exceed And Excel, and the dam of Group Two winner and Group One placed, Encryption.

For pedigree buffs, Bivouac is also linebred to Danehill through a son and a daughter.

Godolphin Australia’s managing director, Vin Cox, couldn’t be more delighted with Bivouac’s prospects, both as a racehorse and sire.

“That was an outstanding win on Saturday and he’ll run in either/or the William Reid and TJ Smith,” Cox reveals. “As for long terms plans there are some very nice races for him in the spring. Godolphin has a slot in the ($14 million) The Everest and Bivouac is our No. 1 pick at this stage.

“Looking even further ahead, there’s obviously some terrific Group Ones he can chase down next autumn and, who knows, maybe even a campaign in Europe.”

(While Exceed And Excel would ultimately finish down at the track at his only start in England – the Group One Newmarket July Cup – Newmarket winners have an excellent record at Royal Ascot including Takeover Target, Miss Andretti and Scenic Blast [all winners of the King’s Stand Stakes] and Black Caviar [Diamond Jubilee]).

Hanseatic won his first three starts before a lip second to Tagaloa in the Group One Blue Diamond Stakes last month.

“They are very strong form lines heading into the Slipper and Hanseatic will trial this week,” Cox points out. “Hanseatic has a very exciting profile: he’s by our sire, Street Boss (39 stakes winners), hails from an outstanding family and will soon hopefully add a Golden Slipper to the resume.”

HOOFNOTE: Cox was particularly keen to get out the message about the Godolphin Stud and Stable Staff Awards, the nominations for which close this Friday (13 March).

“Look, I can’t be any more emphatic about this,” Cox enthuses. “There are no Bivouacs or Hanseatics OR Exceed And Excels without a dedicated team of people working behind the scenes.

“They truly are the unsung heroes of our industry and hopefully the awards go some way toward recognising these people.

“So be a mate and nominate. To paraphrase the late Bob Hawke, any boss who doesn’t nominate is a bum!”