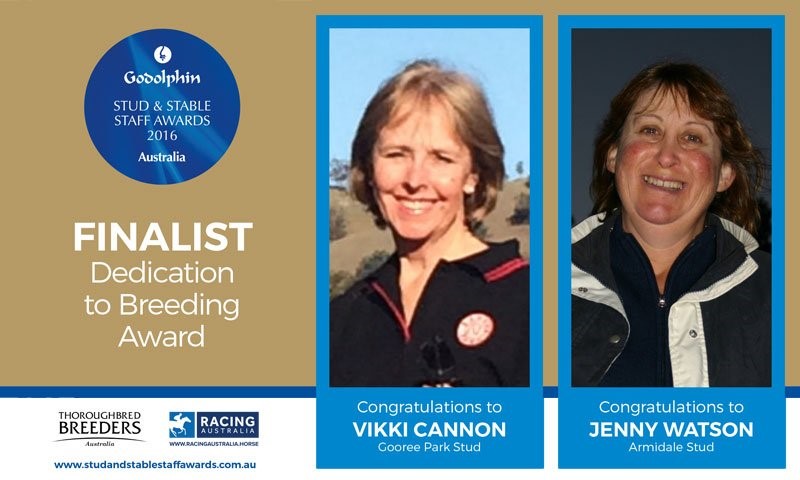 The 2016 Godolphin Stud & Stable Staff Award winners are to be announced this Friday (2 December) at Moonee Valley Racecourse and, once again, will give voice to the Australian thoroughbred industry’s often unsung heroes.

While these awards showcase the depth of talent and professionalism available, they also serve to highlight the dedication from the many thousands of staff throughout Australia.

Armidale Stud’s Jenny Watson, is a finalist for the ‘Dedication to Breeding Award’ – along with Gooree Park’s Vikki Cannon – and is a prime example of what the Godolphin Stud & Stable Staff Awards set out to achieve.

Watson has done ‘foal watch’ at Armidale Stud for the past 35 years and, as many of you would know, it can get a bit nippy in Tasmania in the wee hours … particularly in July and August. However, Watson is as keen as she was at day one and Armidale’s principal, David Whishaw, reckons she would still be fronting up each night, even if she had a walking frame!

Indeed, as a small breeder in her own right, Watson bred a dual Group One winner in 2016 but would much rather talk about helping out students and work experience as her enduring legacy.

The Godolphin Stud & Stable Staff Awards feature five other categories aside from Dedication to Breeding: ‘Leadership’, ‘Dedication to Racing’, ‘Administration’, ‘Thoroughbred Care and Welfare’ and ‘Horsemanship’.

Two worthy finalists in Wattle Brae Stud’s Ian Brady and Analese Trollope (Chris Waller Racing) will vie for the Leadership Award; Hayley Nichols (Schweida Racing) and Mick Burling (MC Conners Racing) are the two finalists for the Dedication to Racing Award; Nikki Cook (Shory Park) and Lee Purchase (Darren Weir Stables) are acknowledged in the Thoroughbred Care and Welfare section; Godolphin’s Scott Eeles and Gerard Ryan from Coolmore will make it a difficult choice for the Horsemanship Award; while Melanie Caban (Vinery) and Lyn Dressing (International Racehorse Transport) boast an incredible 72 years of experience between them in the Administration Category.

As mentioned at the outset the Goldolphin Stud & Stable Staff Award winners will be announced this Friday, but the great thing is, that among all the nominees and finalists, there are no losers.