Golden Slippers at Half The Price 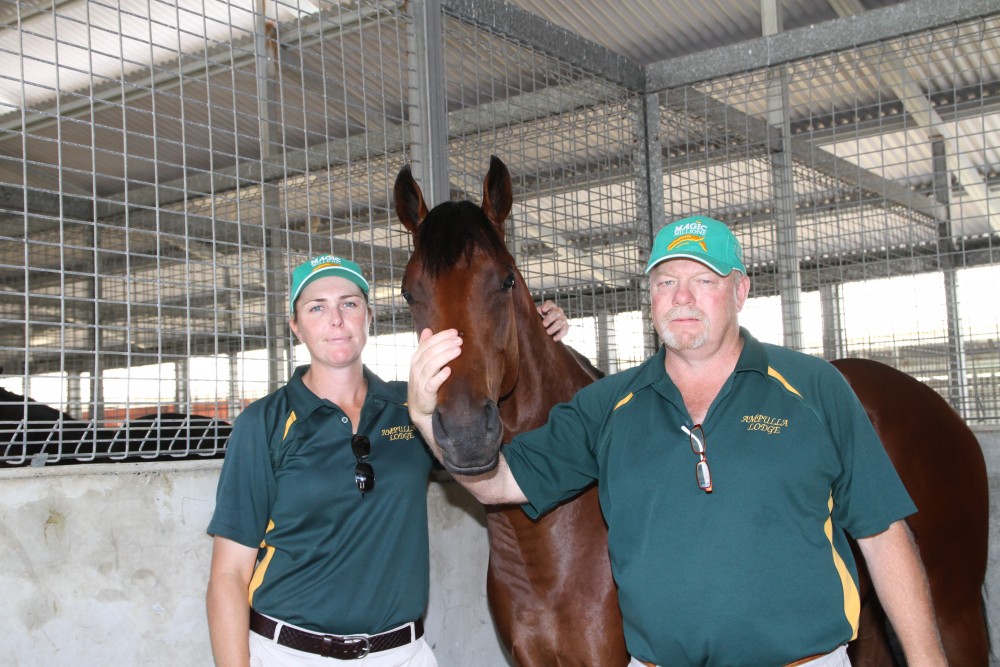 Originally it was a name given to speculators in the American tobacco industry who would buy young plants cheaply from farmers and sell them at a profit when they matured.

These days “pinhooking” refers to the less contentious practice of buying young horses and doing the same.

And for a growing group of industry specialists it is offering rewards that are making the risks worthwhile.

Around 100 of the yearlings sold at this month’s Magic Millions Gold Coast Yearling Sale had previously been purchased as weanlings, and at the coming Inglis Classic and Melbourne Premier sales, there are many more.

The big winner for pinhooking at the Magic Millions was a colt by Exceed And Excel from the Snippets mare Common Smytzer who sold for $800,000, having cost its vendor Steve Jostlear’s Ampulla Lodge $300,000 as a weanling eight months earlier.

The colt was one of three, Book 1 yearlings Jostlear pinhooked as weanlings and who sold so well at the Gold Coast that Ampulla finished the sale in second place on the vendors’ averages.

“We expected a good result with the Exceed And Excel colt, but it was a better one than we imagined,” said Jostlear.

“A lot of people said we were mad when we bought the colt as a weanling, and they might have been right.

“But he was the best we’d seen in Australia. He was a beautiful colt, something right out of the box, and he just grew and grew into a lovely yearling.”

As handsome as the profits may be, pinhooking is more than simply picking a weanling with four legs and a reasonable pedigree, getting it into shape as a yearling and taking it to the next sale.

Pinhookers must be as bold as they are astute when buying a weanling.

“Like most things in racing, it’s risky,” says David Johnson, who along with his wife Kayley has built up a specialist pinhooking business they run in conjunction with their agistment property Rushton Park in Victoria.

“It can also be pretty nerve-wracking. You know that every bid you make when you’re buying them means that you need two more bids when they sell.”

“It’s like going to a casino, no different to having a bet,” he says.

“And you have to be aware of the fashions, and the thoroughbred industry can be more fashionable than the fashion industry.”

Like Jostlear, the Johnsons inspect almost every weanling offered for auction in Australia – usually around 1200.

“Usually I don’t look at the catalogue until after I’ve inspected them,” Johnson says.

“You look at them and try to imagine how they’ll look in eight months time. Then you look at the catalogue and then work out what you think will be a good price.

“Then you have to stick as closely to that figure as you can. You have to be disciplined.”

Johnson mostly concentrates through the lower end of the weanling market, looking at colts and trying to pick a stallion who, like his young offspring, might be underrated.

“I’ve bought a few by Nicconi lately. He’s a stallion I earmarked because he had big numbers of mares to him,” he says.

“I really don’t care what I pay for a weanling, I just want to buy a horse that I think trainers will want to train.”

“We’ve had the occasional disaster, but that happens in all areas of racing,” he says.

While pinhooking is a familiar and accepted part of the thoroughbred breeding and sales industry in America, the UK and Ireland, there can be a feeling among some in Australia that it is a less-than-honourable form of horse trading.

“I have people come up to me at sales and ask me how much I paid for a horse I’m selling,” Johnson says.

“They could look it up if they wanted, all the sales results are public knowledge, but they’re sort of saying ‘why should you get more than you paid’.”

Johnson points to two of Australia’s most notable racehorses of the past few years as examples of why pinhookers are entitled to their place in the system. The practice he says, can be a legitimate step in a process in which there can be several winners.

“Horses like Pierro and Zoustar (pictured right) were both pinhooked as weanlings and went on to make a lot more than what they cost as yearlings,” Johnson says.

Pierro sold for $115,000 as a weanling at the Darley Stud reduction sale to David Kobritz of Musk Creek Farm who sold him as a yearling eight months later for $230,000.

Pierro went on to win the Golden Slipper and earn more than $4.5 million prior to being syndicated as a stallion for somewhere in the region of $30 million.

Prominent pinhooker Rhys Smith of Kulani Park bought Zoustar as a weanling for $85,000, then sold him for $140,000 as a yearling.

Zoustar won six of his nine starts, including two Group 1s and was later sold as a stallion.

Pinhooking also has its share of ironical and unfortunate stories.

Like the one concerning the Irish galloper Gordon Lord Byron who was purchased for 2000 Euro as a weanling and 5000 Euro as a yearling. Having failed to recoup their costs, his owners retained him.

But their disappointment was short-lived as the horse went on to win three Group 1 races, including the George Ryder Stakes at Rosehill, and A$2.8 million.

And there is always The Green Monkey.

The colt gave his pinhookers Randy Hartley and Dean de Renzo a monumental windfall when they turned the US$425,000 they paid for him as a yearling in Kentucky in 2005 into US$16 million, the highest price paid for a thoroughbred at auction, a year later.

The Green Monkey retired a maiden after three starts and now stands at stud where he’s been more successful, siring 35 named foals and producing 25 winners from 32 runners.

No Green Monkeys are likely to pass through an Australian sale ring any time soon, but for the pinhookers whose sights are set at the right level, there is plenty of opportunity to make a living and play a useful role.