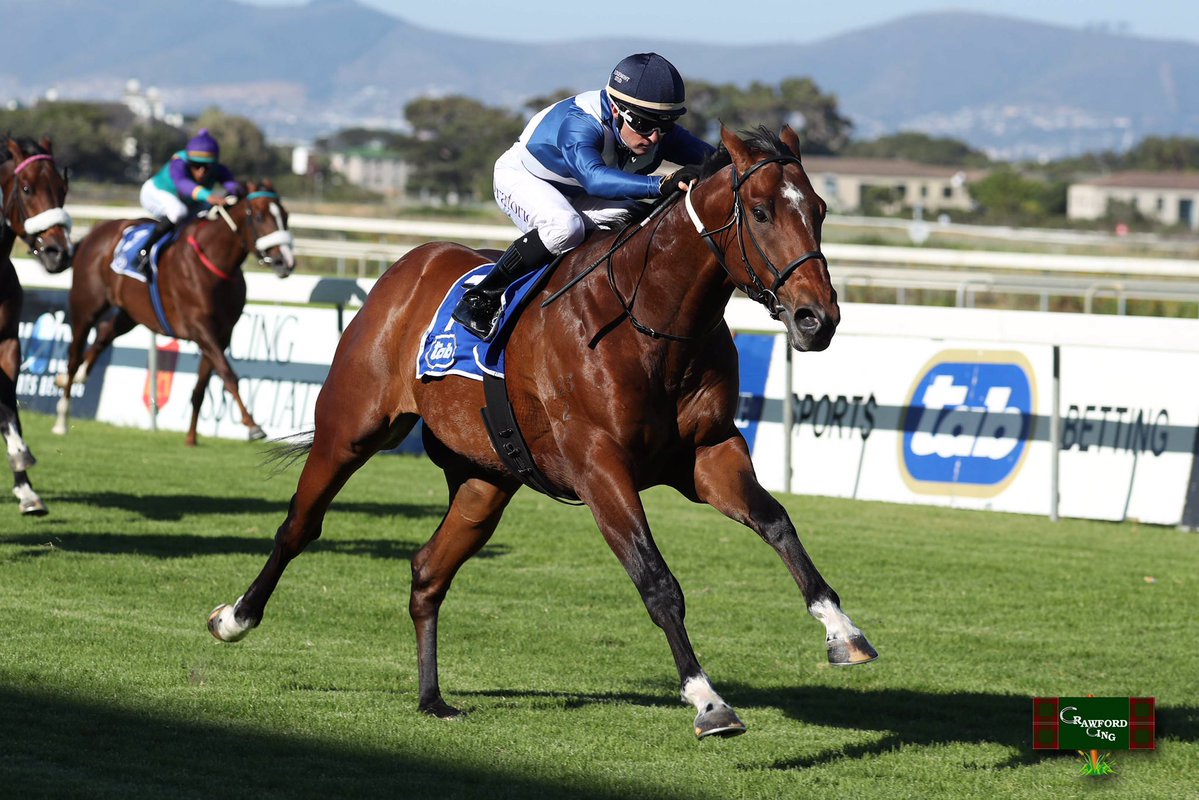 Australian-bred, Whisky Baron, is now poised for a tilt at Group One glory following a resounding victory in the Group Two Peninsula Handicap at Kenilworth on Saturday night.

The Brett Crawford trained son of Manhattan Rain has now won four straight and is likely to start a clear favourite in the Group One Sun Met at Kenilworth on 28 January.

The ninth stakes winner for Manhattan Rain, Whisky Baron was sold by Arrowfield Stud to Craig Roscoe and Joey Ramsden for $50,000 at the 2014 Inglis Easter Yearling Sale and is owned by Craig & Ross Kieswetter, who race their horses in the same colours as the Scottish flag.

They certainly flew proudly on Saturday night as Whisky Baron swiftly makes his way up the rank of South Africa’s elite with five wins, six placings and a fourth from his 12 outings to date.

Crawford was certainly impressed with Saturday’s performance and believes he’s a very good chance in the Sun Met: “His record is flawless since he was gelded and I’m very confident about the Sun Met and that he can take the step up to Group One class.

“I’ve been to the Melbourne Premier sale a couple of times and Whisky Baron is one of four Australian-breds in my stable, the others all being fillies.

“Hopefully we’ll be talking again after the Sun Met!”
Whisky Baron is the fourth foal of the unraced Sinndar mare, Tazkara, a half-sister to French Group winner Tashelka and Listed winner Tashkandi. Like this season’s debut 2YO stakeswinner Azazel (by Snitzel), he is a result of the Aga Khan/Arrowfield joint venture.
Tazkara has a 3YO filly named Pretty Snitzel (by Snitzel) in training with Kelly Doughty on the Gold Coast and, after returning to France in 2014, foaled a second filly by Snitzel. Now a southern hemisphere 2YO, that filly will be prepared by leading French trainer, Jean-Claude Rouget.
Tazkara also has a yearling colt by Excelebration and is in foal to the Shadwell stallion Muhaarar (by Oasis Dream).
Whisky Baron is Manhattan Rain’s third stakeswinner this season, following on from Group Two-winning sprinter Wild Rain and brilliant juvenile She Will Reign, an early favourite for the Golden Slipper.
Manhattan Rain, a Group One winning son of Encosta de Lago, has three yearlings on offer at this week’s Gold Coast Magic Millions, including a colt from Group One winner Macedon Ladyand the full sister to Group Two winner Scarlet Rain.