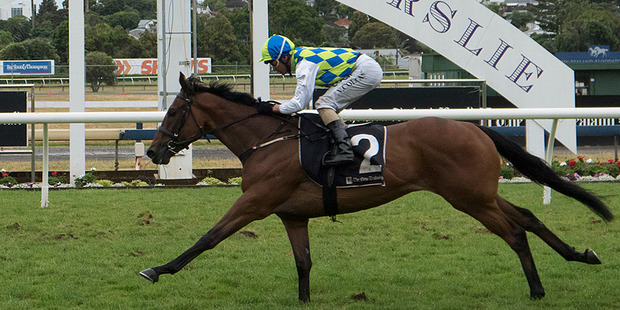 With Group 1 plans on the horizon for Rangipo, the three-year-old could join an illustrious list of previous Guineas winners to go on to record success at the top level.

As the weather set in and the track was downgraded from a Good 2 to a Slow 7, trainer Tony Pike contemplated scratching Rangipo, but luckily for connections a decision was made to run, resulting in the talented gelding taking home the prize.

Having his first start since finishing fourth in the Group 3 Wellington Stakes (1600m) over a month prior, the John and Margaret Thompson-bred Rangipo indicated his ability with a length and a quarter victory over fellow Australian-bred Get That Jive (Street Sense), who worked home very well late.

“We were pretty close to scratching him after the track downgrade as we felt the slow going would be a little tough for him given he hadn’t raced for over a month,” explained Pike.

“The weather settled a little and the times they were running said the track wasn’t as bad as we first thought so I said to his owners we should start and they agreed.”

With four of the last five winners of the Great Northern Guineas graduating to Group 1 success, Pike is confident that his quality galloper is capable of joining that list.

Always touted as a quality three year old that would appreciate a Classic trip, Pike feels that the NZ$1 million Group 1 New Zealand Derby (2400m) on March 5 is the race to target, but the path to that race is still undecided.

“He’s in the Levin Classic but I’m not keen on going to Trentham to take on Xtravagant, we’re more likely to stay local,” Pike added.

“He’s always given me the impression he’ll get a staying trip.”

“He has a sharp turn of foot and relaxes. He cleared the gates quickly today and Vinny dictated the pace outside the leader and he relaxed.”

Being out of Holloway Castle, a daughter of Zabeel, Rangipo has the stamina in his pedigree to suggest he will excel when stepped up in distance.

A victory in the Derby would emulate the feat of fellow Australian-bred Mongolian Khan who was successful in the 2015 Classic before heading to Australia and winning both the Group 1 Australian Derby and the Group 1 Caulfield Cup before injury ruled him out of the Melbourne Cup, a race he was the favourite for.

Rangipo is a member of the first Australian-bred crop of Stryker (pictured below), a Group 3-winning, Group 1 placed son of Fastnet Rock and joins Listed winner Strykum as one of four stakes performers for the stallion.

Bred by Sledmere Stud and sold through the draft of Segenhoe Stud at the Inglis Easter Yearling Sale, Stryker was purchased by Ingham Racing for $600,000 and had the honour of being the first stakes winner in the cerise silks trained by Chris Waller when winning the Listed Heritage Stakes.