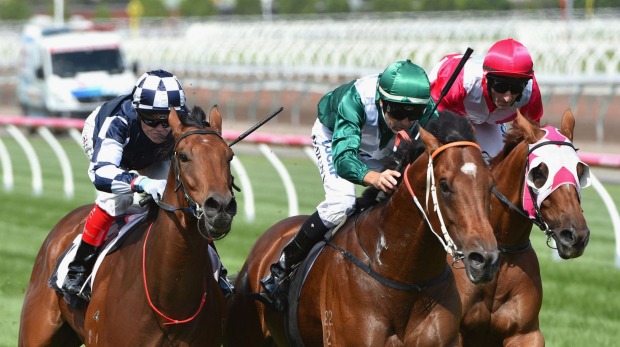 It is often said an outstanding mare on the track is far from a recipe for success in the breeding barn. But even the problematic River Dove, who has proved much more of a headache for a stud farm manager than a racehorse trainer, is doing her best to disprove the theory.

An Oakleigh Plate winner on the track, River Dove has been faced with her fair share of challenges at stud despite potentially leaving her best progeny in Headwater, the listed Kensington Stakes winner at Flemington on Saturday. It continued to shore up Headwater’s stallion suitability for owners Vinery Stud.

The Exceed And Excel Silver Slipper winner is a full brother to stakes placed mare Fare Well and a half brother to Fastnet Rock’s $4 million yearling colt Emaratee, which is still a maiden after two starts.

But despite only ever being served by two of the country’s leading stallions, River Dove has proved more than a handful for Cressfield Stud.

“She has been problematic as a breeder to say the least and is quite often difficult to get in foal, especially when she has one at foot,” said Cressfield Stud’s general manager Wayne Bedggood. “She is currently in foal to Exceed and Excel, but was unfortunately a dry mare heading into last season.”

It is why Cressfield have had to make contingencies to ensure the family line remains strong, deciding to retain River Dove’s Fastnet Rock filly foaled in the 2014 season which is “growing into a lovely animal” as well as purchasing her first progeny.

“We only recently bought out full ownership in the mare Dove Lake, who is the Flying Spur x River Dove from 2007,” Bedggood said. “She has a Sepoy filly at foot and is in foal to I Am Invincible. We just love the family and could not be happier that our friends at Vinery are having success with Headwater.”

As for Headwater? He is just adding to the embarrassment of sprinting riches father and sons training team John, Michael and Wayne Hawkes have heading into the autumn – Our Boy Malachi won the group 2 Expressway Stakes feature at Rosehill – which is spearheaded by dual group 1 winner Chautauqua. Headwater will again be plunged into group company at his next start.

“It is fair to say [Headwater] has his mother’s nature as she is a kind natured mare,” Bedggood said. “He was always a good type but a little later to develop than some of his siblings. He was a quiet and well behaved colt who was liked by everyone that worked with him.”