Holler Throws His Name Into The Sprint Ring 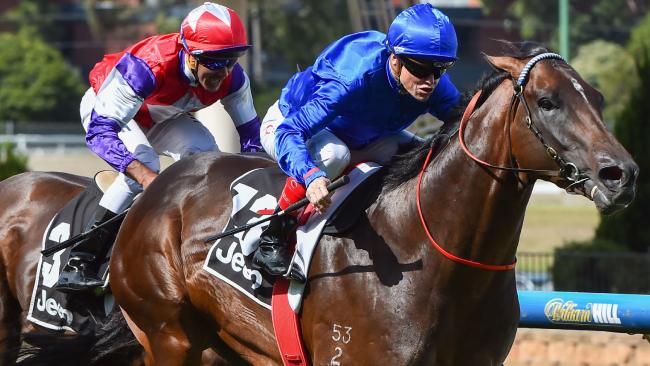 A new name challenged for entry into the ever-changing ranks of Australia’s elite sprinters when Holler emerged as a possible member of the group in the Group 2 Australia Stakes (1200m) at Moonee Valley.

Holler scored the best win of his career at the Valley, having won the Group 3 Red Anchor Stakes against his own age at the same track in October.

But in a performance anticipated by the stable, the colt accounted for several older and more experienced Group 1-winning rivals on Saturday.

While trainer John O’Shea’s pre-race instructions were issued from Europe, they were on the mark and perfectly followed by jockey Craig Williams.

“John told me to trust the horse, that he was ready to run very well, and he was right,” Williams said.

The logical path for the son of Commands is to move on to the feature sprints of the Melbourne autumn where he could be joined by the stable’s outstanding three-year-old sprinter Exosphere who impressed in  a trial at Warwick Farm today.

Exosphere hadn’t appeared in public since finishing fourth in the Group 1 Coolmore Stud Stakes at Flemington last October, but his trial effort suggested he has come back in good order.

The son of Lonhro cruised past some top-flight Group 1 horses to finish second in a trial he could have by many lengths had he been asked to.

O’Shea is considering a Group 1 Lightning Stakes resumption at Flemington on February 20 for the star Godolphin colt.

Should he again fail to handle the Flemington straight track as he did in the Coolmore, O’Shea would be likely to return to Sydney and prepare the colt for the Group 1 TJ Smith Stakes.

In an 800m dash that would qualify as one of the best fields of the autumn, Exosphere’s trial also featured the Blue Diamond Stakes and Sires Produce winner Pride Of Dubai, Coolmore winner Japonisme and the Caulfield Guineas winner Press Statement.

In Australia’s other stakes races over the weekend, Zin Zan Eddie (Zizou) claimed the Listed Carrington Stakes (1400m) at Randwick and Tina Melina became the seventh stakes winner for her sire Jet Spur when she won the Listed Nudgee Handicap (1200m) at Doomben. Jerilderie Letter (Bushranger) also confirmed his status as a Tasmanian Derby prospect taking out the Hobart Guineas (2100m), the first for trainer Adam Trinder.

A sister (Lot 531) to Zin Zan Eddie will be offered by Turangga Farm at the 2016 Inglis Classic Yearling Sale that begins in Sydney on February 6, and Brooklyn Park will present a half-brother (Lot 29) to Jerilderie Letter at the Magic Millions Tasmanian Yearling Sale on February 18.