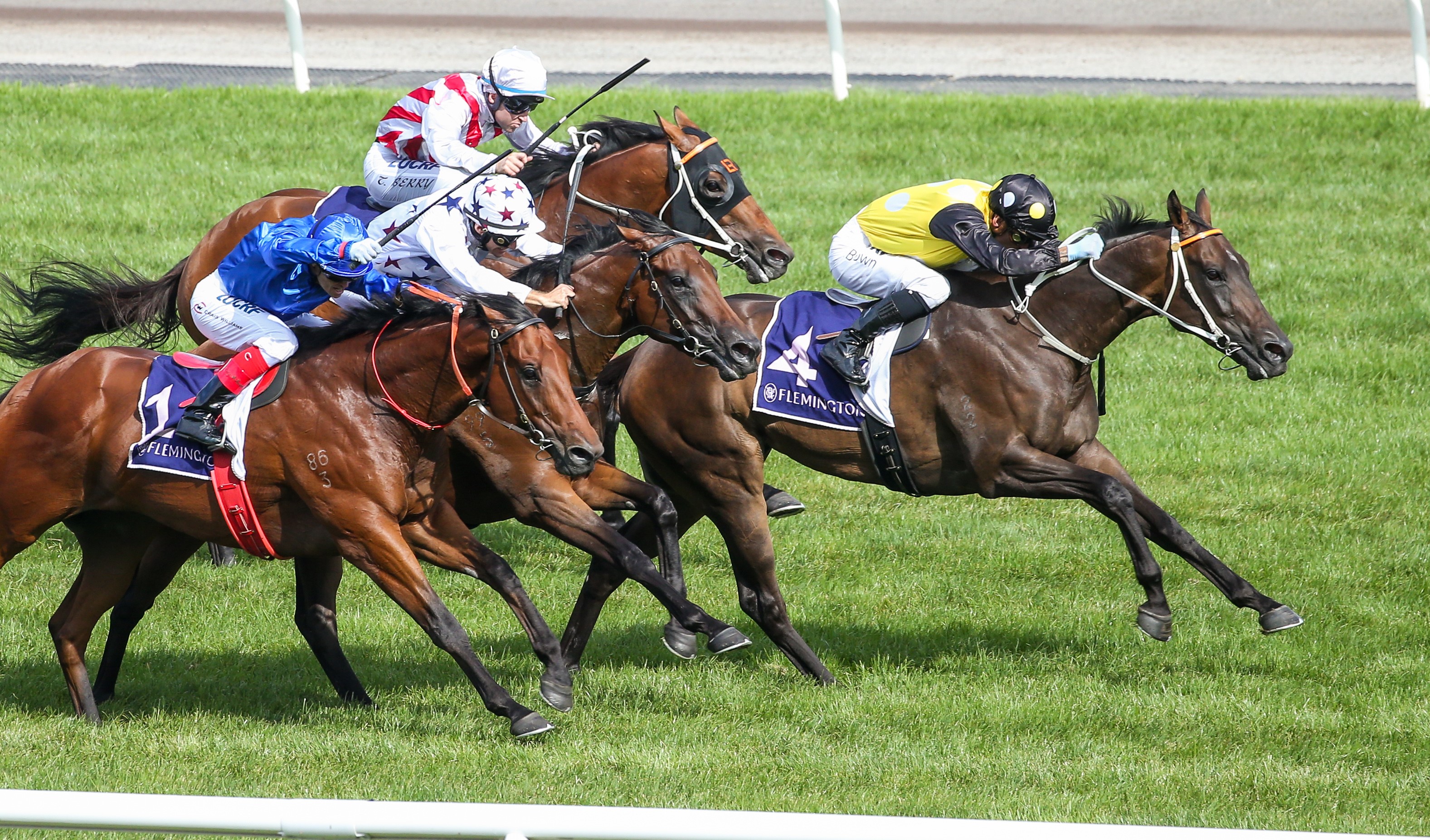 Often called the “Winx of Newcastle”, In Her Time was at it again on Saturday, capturing the Group One Black Caviar Lightning Stakes over 1000m at Flemington in a thriller.

Accentuating the win was the opposition: Osborne Bulls, Sunlight and Graff – second, third and fourth respectively – all putting in blinders.

Sure, In Her Time will need to win her next 29 straight to match strides with Winx, but the 6YO flyer has been an incredible performer: the Lightning was ‘only’ her second Group One victory after winning the Galaxy last March, but she has also won a Premiere, Millie Fox and Breeders Classic – all at Group Two level – along with Group One placings in the Sprint Classic, Stradbroke, Manikato, TJ Smith and Tatt’s Tiara.

Even more impressively though, since winning the Breeders Classic just on two years ago, In Her Time has only thrice been out of a top three finish and all bar two of those 16 starts – one of them being the $13 million The Everest – was at Group One or Group Two level.

In Her Time was resuming in the Lightning, having last been sighted finishing a neck second to Santa Ana Lane in the Group One VRC Classic last November.

“She’s been knocking on the door and I’ve got to thank (former trainer) Ben Smith who has done a wonderful job with this mare,” a jubilant trainer, Kris Lees, enthused. “Well done to (assistant trainer) Cameron Smith too and obvious thanks also to owner Peter Brown for entrusting me with the mare.

“In Her Time is next likely to run in the ($1.25 million Group One Seppelt) Newmarket Handicap (on 9 March) but she’s won two Group Ones now so we’ll see what the handicapper gives her.”

Not surprisingly, Peter Brown was buoyed by the result: “She’s one mighty fine mare and I’m very lucky to have her. We are in a great position now to be able to look at all the big sprint races and see where we want to go.

“None of this would be possible if it wasn’t for breeders, John and Denise Cobcroft and also to Kanangra, which did all the early work with her.”

Renowned for industry philanthropy, the Cobcroft Estate has donated many hundreds of thousands of dollars to the National Jockeys Trust.

“John died in 2005 and Denise passed away in 2010 and both were such terrific people and such great contributors to the industry,” Kanangra’s Fred Moses points out.

“The Estate has been looked after by Peter (Brown), Bob Charley and Kanangra … the horses all still carry the Cobcroft brand and In Her Time pretty much epitomises what they tried to achieve in racing and breeding.”

Situated on 250 acres, some 10 minutes north of Scone in NSW, Kanangra has been in operation for over 20 years and its graduates include dual Stradbroke winner, Black Piranha and another Cobcroft bred in Under The Louvre, yet another Group One Stradbroke winner.

However, Moses clearly has a soft spot for In Her Time.

“In Her Time is a fantastic racehorse and really deserved that win on Saturday,” Moses adds. “She’s out of the winning Zeditave mare, Hell It’s Hot who has produced five winners from six to race.

“It’s a good family too as Hell It’s Hot’s dam, Steam Heat produced 13 winners from as many to race and three of those were stakes winners.

“I really think Hell It’s Hot is carrying more than her weight in these matings as In Her Time would have to be the best runner by her sire, Time Thief (the former Darley horse who now stands in South Africa).

“Hell It’s Hot has a nice Artie Schiller filly who was passed in at the Inglis Sydney Classic Yearling Sale last week, while she also has a weanling filly by Under The Louvre, who is likely to be retained. She’s now in foal to Impending.

“The Under The Louvre mating was a touch sentimental as both sire and dam were bred by the Cobcrofts … nice filly too.”