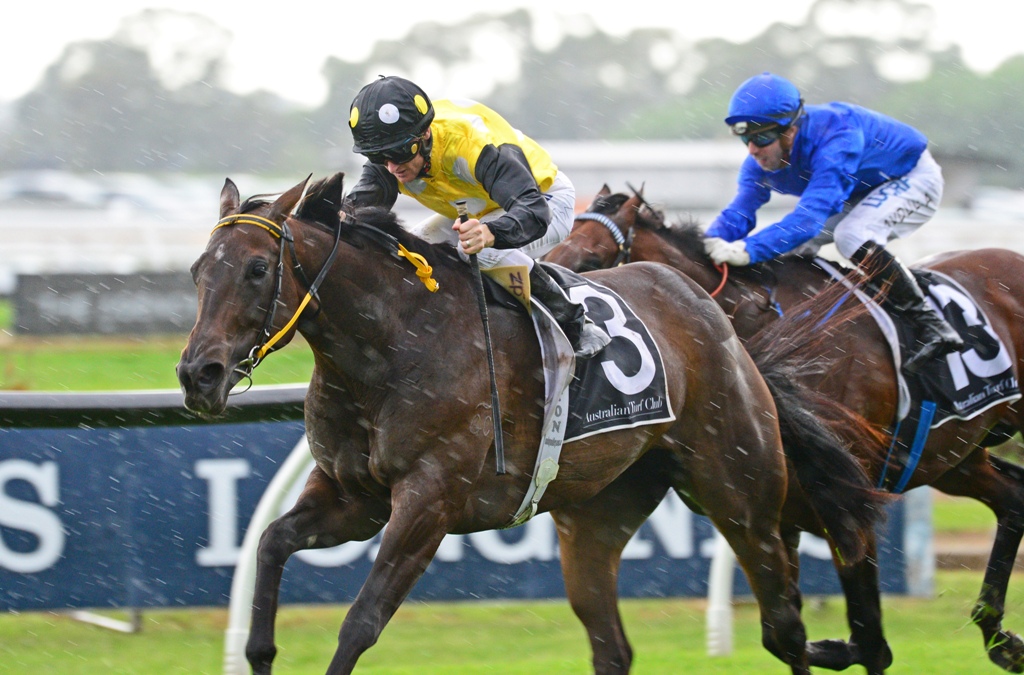 According to part-owner, Cath McDonald, In Her Time’s victory in the Group One PFD Food Services The Galaxy over 1100m at Rosehill Gardens on Saturday didn’t come a minute (and four point three seconds) too soon.

“She (In Her Time) should have won five Group Ones by now,” McDonald enthused immediately after the race.

Given some 36 hours for the nerves to settle, McDonald admits that five might be a stretch, but there’s a decent argument that the “Winx of Newcastle” could easily have had three victories at the elite level under her girth strap by now.

The 5YO mare, In Her Time, really is in her time: trained out of Newcastle by Ben Smith, In Her Time had three Sydney wins on her CV before breaking through for a victory in the Group Two Breeders’ Classic over 1200m at Royal Randwick in February last year.

A Group Two Millie Fox followed, as did a fifth in the Group One Coolmore Classic behind Heavens Above and, after a short let up, a trip to Brisbane for the Group One trio: the Doomben 10,000 (fifth), Stradbroke Handicap (second, beaten a neck) and Tatt’s Tiara (third, beaten a length).

Some might suggest that winning any one of those Group Ones would have earned In Her Time a spot in the $10 million The Everest, ultimately won by Redzel, but the mare would resume in the Group Two Premiere Stakes at the end of September, beating Group One winners English and Clearly Innocent – running a class record – and was again successful in the Listed Sydney Stakes at Randwick on 14 October finishing, as it turned out, a tenth of a second quicker for 1200m than Redzel did in the The Everest just 40 minutes later.

Smith then took In Her Time to Melbourne where she threw a plate in the Group One Manikato Stakes at Moonee Valley and took off a bit of the hoof in the process, but still ran a head second to Hey Doc in a thriller.

“Her feet have always been a bit of weak point and the original plan was to take her from the Manikato to the Darley (won by Redzel) but throwing that plate might have been a bit of a blessing in disguise,” Smith points out.

“She’s had a good rest up and the feet are terrific now … she really showed what she’s capable of on Saturday.”

For Smith, who struggled early on after taking out his license around seven years ago, In Her Time has been a real game changer and he currently has 16 in work at his Newcastle stables, with some seven horses at the pre-trainers.

“In Her Time was passed in at the (2014) Inglis Classic Yearling Sale and Peter Brown, who was looking after the estate of (breeders) John and Denise Cobcroft, asked if I’d like to take the filly on,” Smith reveals.

“Peter has some horses with Kris (Lees) but he’d seen me around the track a bit and we got chatting and it just went from there.

“The thing I’ve most benefited from with In Her Time is learning to be patient and not rushing them between starts. She’s a wonderful mare.”

Smith said In Her Time’s next assignment is likely to be the $2.5 million Group One TJ Smith Stakes over 1200m at Royal Randwick on 7 April where she is poised for a showdown with Redzel.

“She could go to Adelaide after that for the (Group One) Robert Sangster or back up to Brisbane, but we’ll just see how the horse goes,” Smith adds.

All in her own VERY good time.

Sydney, Adelaide or Brisbane, part-owner McDonald plans to be near and dear regardless of venue.

“My husband Mark and I had raced some greyhounds and even had a trotter at one stage, but In Her Time was our first racehorse,” McDonald explains. “There’s a lot of great mates involved in the ownership of In Her Time and she’s just been such a terrific horse for us. A lot of fun.

“We’ll probably go into another racehorse when In Her Time retires – maybe one of her babies? – but we’re just happy to cheer her on for the time being.”

Sadly, McDonald’s husband, Mark, died last year around the time of the Brisbane campaign, but as McDonald and her excited compadres commented as the rain tumbled after the Galaxy on Saturday, “that’s Mark’s way of telling us he was watching the race too.”

Based on In Her Time’s resounding performance in the Galaxy and albeit short of a long range forecast, there could be a serious chance of rain at Royal Randwick for the TJ Smith.

Cheering the Galaxy win just as loudly – is that possible? – was Fred Moses, whose Kanangra Park was where In Her Time first saw the light of day.

“She was always a really nice looking filly and definitely deserved that Group One victory,” Moses points out.

“John and Denise (both have sadly passed away) were such terrific people and great contributors to the industry.

(The Denise Cobcroft Breeding Trust made a $400,000 donation to the National Jockeys Trust in 2017).

“The horses all still carry the Cobcroft brand and In Her Time pretty much epitomises what they tried to achieve in the industry.”

Kanangra Park – spread over 250 acres and home to around 25 mares some 10 minutes north of Scone – has been in operation for 20 years and dual Stradbroke winner Black Piranha and yet another Stradbroke hero in Under The Louvre (2016) are among the farm’s ‘graduates’.

In Her Time is by the former Darley stallion, Time Thief – who shifted to Nadeson Park Stud in South Africa in 2015 – and is from the Zeditave mare, Hell It’s Hot who has four winners from five to race.

Kanangra Park sold a Dream Ahead filly from Hell It’s Hot to Paul Perry – “unraced but reportedly going OK” – for $170,000 at last year’s Inglis Sydney Classic Yearling Sale, just a week after In Her Time won the Breeders’ Classic, while her Olympic Glory filly was snapped up for $210,000 by Triple Crown at this year’s Classic.

“She has a lovely Artie Schiller filly and, I’m happy to say that she is now in foal to Under The Louvre,” Moses adds.