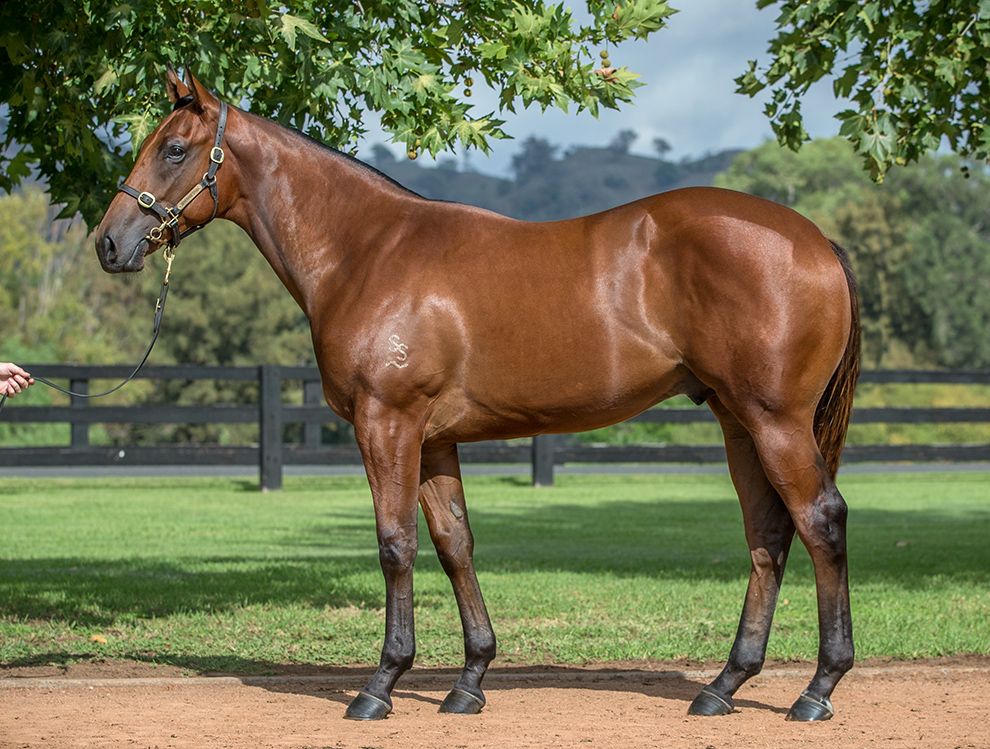 Lot 88 of the Inglis Easter Yearling Sale, the full-brother to Merchant Navy (Inglis)

Ladies and gentlemen … start your engines.

The 2019 Inglis Australian Easter Yearling Sale commences at 11am on Tuesday and, by the time they call stumps in the Sydney twilight on Wednesday, some 400 youngsters will have made their way through the Riverside ring.

The enigma that is racing insists that no-one knows how many of the yearlings will show up as racehorses but, on paper at least, the auction kicks off with a bang – a half sister to unbeaten Zoustyle (5 from 5) – and gathers no moss until the penultimate offering: a half brother to Golden Slipper winner Mossfun.

Both Zoustyle and Mossfun were offered at Easter yearling sales, as were a vast number of siblings or produce of those in the pages between.

All up there are 39 full or half relations to Group One winners catalogued, while a further 34 entries are out of Group One winning mares.

Segenhoe Stud sold Merchant Navy to trainer, Ciaron Maher, for $350,000 at Easter ’16 and the colt went on to win seven of 10 starts – including two Group Ones – for over $2 million in stakes and would subsequently be syndicated to stand at stud in a multi-million dollar deal.

Speaking just over 24 hours before Segenhoe’s prize colt was about to go through the ring, General Manager, Peter O’Brien revealed that Merchant Navy’s brother – by Fastnet Rock from the multiple stakes winning Snippets mare, Legally Bay – had already been inspected on 182 occasions.

“Our record (for number of inspections) is 204 and with a busy day ahead and Tuesday morning as well, I wouldn’t be surprised if he tops the charts,” O’Brien points out. “He’s a beautiful colt and it’s rare that you get physique matching the (pedigree) page. I’ve said to everyone this is the best looking yearling I’ve brought to a sale. It’s not often you get every box ticked.

“Legally Bay has produced six winners, including Merchant Navy’s full sister Jolie Bay who was a Group Two winner and Group One runnerup, and I’ve seen every one of her foals. This bloke is truly special.

“I was fortunate to keep a share in Merchant Navy and would love to buy into this colt as well, but I reckon he might end up making too much and put me right out of contention,” O’Brien adds with a laugh.

Colts like that are not only the ideal advertisement for Easter, but given the number of international ‘feet’ on the ground at the Riverside stables over the last week, a further testimonial for the strength of the Australian thoroughbred industry.

(For further information on the Australian thoroughbred industry, check out the Aushorse Investors’ Guide at http://digital.smedia.com.au/aushorse-investors-guide/)

International investors played a strong hand with Shadwell Stud and the Hong Kong Jockey Club the two leading buyers overall, while two of the top three lots were knocked down to overseas interests.

“I reckon the whole week encapsulates all that is great about our racing and breeding industries,” Aushorse CEO, Tom Reilly, enthused. “The sale is bookended by two days of The Championships at Royal Randwick, which boasts a massive $21 million in prizemoney and culminates this Saturday with Winx’s final race in the $4 million Queen Elizabeth.

“Importantly, the buzz around the Inglis complex is electric: there’s a lot of international buyers out here and the feedback I’m getting is that they like what they see.

“And why not … our research shows that nearly two thirds of Group One winners in Australia were offered for sale prior to their win, whereas that figure drops to below 40% in Europe.

“Bring on the sale!”