Welcome Back With Air Of Invincibility 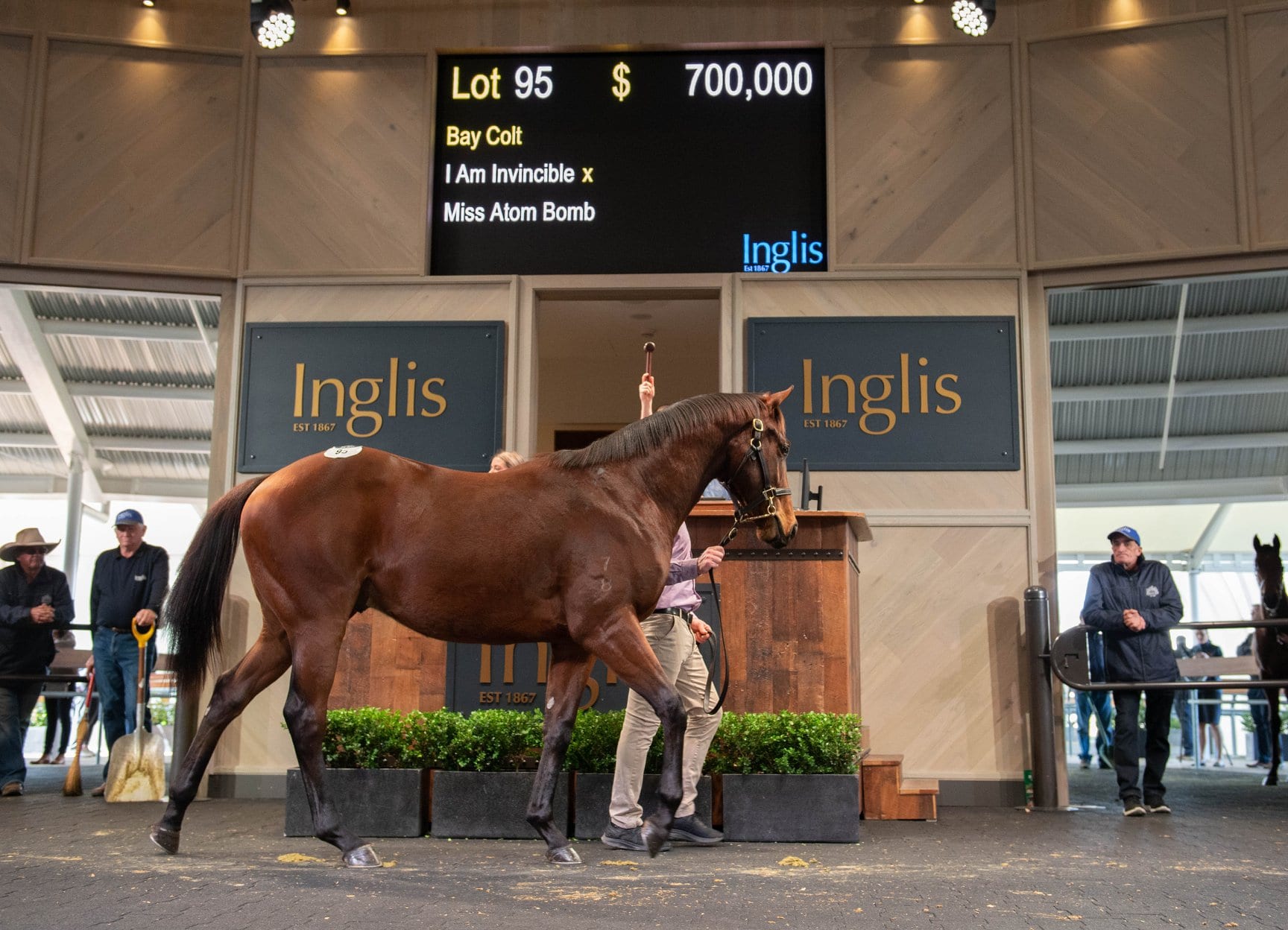 With a boutique auction in Hong Kong on Friday evening, followed by Round 2 of the Easter Yearling Sale AND the Scone Yearling Sale at Inglis’s Riverside complex on Sunday, it proved to be a busy weekend for bloodstock commerce.

However, despite the numerous highlights from all three sales, the greatest take away was the actual return of the horses – and patrons – to the actual sales sites.

It has certainly been a tumultuous few months. Despite the uncertainty due to coronavirus, Inglis had forged ahead with its flagship Easter Yearling Sale, along with the Chairman’s and Broodmare sales, as purely online affairs, but was no doubt elated to again see horses in the ring and bums on seats.

One standard that hasn’t altered from ‘virtual’ to ‘in person’, however, is the clear attraction for progeny of Yarraman Park Stud’s I Am Invincible, who ultimately topped both Easter 2 and Hong Kong.

Meanwhile, it was Swettenham Stud’s rising star, Toronado, who gave hope to ‘pinhookers’ everywhere when his Jazcom Thoroughbreds consigned colt was knocked down for $180,000 after originally being purchased for $10,000 as a weanling.

The ‘mix’ of I Am Invincible and racing immortal, Winx, was too great an attraction for leading Sydney trainer, Gerald Ryan, who topped Round 2 of the Inglis Easter Yearling Sale after purchasing Lot 95 for $700,000 on Sunday.

The I Am Invincible x Miss Atom Bomb colt sold to trainer Gerald Ryan for $700,000

Offered by Bhima Thoroughbreds on behalf of breeders Peter and Terry Board, the I Am Invincible colt is from an unraced half sister to Winx and Ryan was elated at winning out: “He’s a real athlete this colt … big, strong horse. You wouldn’t say he’d be a pre-Christmas 2YO but he’d definitely be ready to run in the autumn.”

The Mr Zhang Yuesheng owned, Yulong, would chime in with the next two most sought out yearlings with $500,000 apiece for the I Am Invincible colt from Gypsy Diamond, along with a Frankel filly from a half sister to European Group One winner Sobetsu.

Chris Waller will train the I Am Invincible colt on behalf of Coolmore Australia, while the Frankel filly heads to Dr Yamazumi’s Champions Farm in Japan.

After the decision was made to place its draft in Round 2, Yulong’s chief operating officer, Sam Fairgray, conceded Sunday was a ‘buyers’ market’, but was more than satisfied with the prices achieved for the colt and filly.

“Everyone has to deal with the current economic circumstances and we’re all in the same boat globally,” Fairgray points out. “It will stay like this for a bit longer, but that said, to get $500,000 for those two horses is something we’re really happy about.

“Full marks to Inglis for being able to create a marketplace with this live auction.”

Despite a low clearance – which will be adjusted in coming days due to post-sale activity – Easter 2 had grossed $6.7 million on Sunday evening for 51 lots sold at an average of $131,588.

While it wasn’t quite business as usual for the re-located Scone Yearling Sale, which immediately followed Easter Round 2, it counts as one of 2020’s success stories given that a new benchmark was set when Jazcom’s Thoroughbreds Toronado colt was sold for $180,000 to Hawkes Racing.

Hawkes Racing was particularly active, snapping up the three top lots which included a Shamus Award colt for $75,000 and an Exosphere colt for $70,000.

The prize for happiest faces at Riverside on Sunday definitely go to the Jazcom crew, helmed by Colin and Meagan Branthwaite, which had secured the Toronado youngster for just $10,000 as a weanling.

“I’d made it quite clear to people close to us that I thought he could top the sale,” an elated Colin Branthwaite reveals. “I thought he’d bring $60,000 but wouldn’t have been surprised if he made $100,000. Yet, to get that great result, it really pays off for what we do with our pinhooking investment.”

Despite entries from Great Britain, Ireland, South Africa and New Zealand, the 2020 Hong Kong International Sale at Sha Tin on Friday night was dominated by Australian-breds, including HK$7.2 million (A$1.3 million) for the I Am Invincible gelding from Group placed High Chaparral mare, Utopia.

Bred by Linda Huddy, the I Am Invincible 3YO was sold for A$1 million through the Torryburn Stud draft at the 2018 Inglis Easter Yearling Sale.

Second highest price, meanwhile, went to the Woodside Park Stud bred Zoustar gelding, who is from a half sister to multiple Group One winner Volkstok’n’barrell, and would be snapped up by Wong Kwong Miu for HK$6.5 million (A$1.2 million).